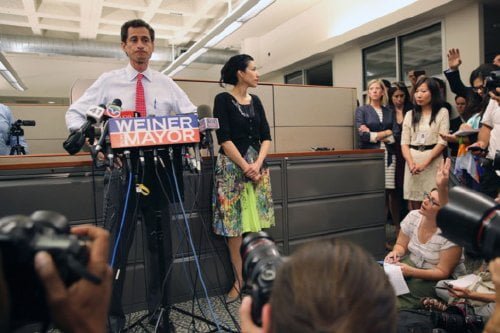 In 2011, Anthony Weiner resigned in disgrace from his seven-term Congressional seat because of his infamous sexting scandal. Two years pass and the ambitious politician is in the political spotlight in the New York City mayoral race. Newcomer documentary filmmnakers Josh Kriegman and Elyse Steinberg follow the mayoral hopeful over the weeks leading up to the election in “Weiner.”

Marshall McLuhan said 'The name of a man is a numbing blow from which he never recovers,' an extremely apt quote to start a documentary on Anthony Weiner, the seven term New York Congressman who resigned after crotch pictures he texted were made public, much to the delight of late night talk show hosts across the land. But the Anthony Weiner introduced to us by filmmakers Josh Kriegman and Elyse Steinberg is a scrappy fighter, a man working for the little guy, a liked politician. So what went wrong? Once the scandal erupts, we see the man go through denial, admittance, rebellion and finally, capitulation. Two years later, he and wife Huma Abedin, Hillary Clinton's closest aide, have worked through their difficulties, enjoying their young son, but it is clear she still smarts from their public bashing, wishing for a recovered stature of their public coupledom. Her husband decides to run for mayor. It seems like a mutually beneficial decision, his campaigned goosed by his wife's ties to a presidential campaign, her public persona restored as New York's potential First Lady. At first everything goes swimmingly, Weiner popular once more, ably deflecting media attention on the past with introspective humility. The campaign is counted down by weeks remaining until voting day, Weiner surging in the polls. Then, five weeks before the election, a new bombshell drops, new pictorial texts emerging from 'Carlos Danger.' The unprecedented access given filmmakers Josh Kriegman and Elyse Steinberg is both the film's biggest asset and its most worrisome aspect. As Weiner struggles to right his ship, Huma, who appears at his initial press conference, begins to retreat. The candidate is frustrated by his wife's absence, muttering comments on camera. He takes his son out in his stroller, a clear grab for photo ops, as Huma huddles in their foyer. It is difficult not to feel that this woman who is going through a second round of public humiliation is being exploited. When Lawrence O'Donnell asks the man 'What's wrong with you?' on TV, he voices what everyone's thinking. The filmmakers even ask why he allowed him to film all this, he replies he didn't want to just be a punchline. But Anthony Weiner never appears to know when to stop, his anger and frustration boiling over into a confrontation with the public. Much like Alex Gibney's "Client 9: The Rise and Fall of Eliot Spitzer," "Weiner" is a portrait of an obviously intelligent, committed politician with an inability to restrain himself. Yet watching it gives the audience a creepy sense of eavesdropping on marital intimacies not meant for public consumption. Grade: