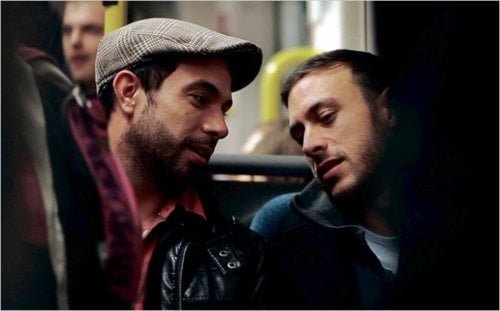 Russell (Tom Cullen) is quietly gay amongst his mostly straight friends. After a night of boozing with them he stops off a gay bar for a drink. There, he meets Glen (Chris New), an outgoing artist and the two spend the night together. This leads to 48 hours of talking, sex and exploration of the city and each other that brings them to a crossroads to choose between an extended one night stand and a commitment to a new relationship in “Weekend.”

In the British Midlands, Russell (Tom Cullen, "Daddy's Girl") is a gay man who leads a quiet life, working as a lifeguard and being godfather to his best friend Jamie's (Jonathan Race) young daughter. Then late one Friday night he goes to a gay club and picks up Glen (Chris New), a militant artist, and Russell's life is forever changed in one "Weekend." Writer/editor/director Andrew Haigh has made a lovely little film with two very good actors who are able to express their characters' strong connection despite being almost total opposites. Would the film be as highly regarded if its characters were heterosexual instead of gay? Probably not, but then again, gay cinema hasn't had a surfeit of small, dramatic, character-driven love stories. It's easy to compare "Weekend" to "Before Sunrise" but this film has a more depressive edge (and a dash of "sex lies and videotape") and one very forthright sex scene that's emotionally affecting. Both stars, but particularly Cullen, give breakout performances. Russell blends in with his heterosexual friends mostly by keeping his head down. He's affectionately included, but doesn't talk much and it's clear his friend Jamie regards his early leave-taking as a bit of a slipping away. Jamie proves right when Russell doesn't return to his hi-rise flat but to a nightclub where he ends up pairing off with Glen on the dance floor at night's end. The next morning, Glen seems comfortable in Russell's bed, but Russell admits to thinking Glen was 'out of his league' ('Just what is your league?' Glen responds) and is more than a bit uncomfortable when Glen asks him to talk about the night before into his portable recorder for his art project. And here is the crux of the two characters - Russell tries to fit in with a homogenized lifestyle while Glen views heterosexuals as oppressors and invites confrontation at every turn. Russell talks about feelings and Glen talks about sex. After what appears to be a one night stand turns into more (Glen meets Russell after work and dorks out by accepting a 'backie' on Russell's bike), Haigh throws an obstacle at his couple - Glen's leaving Sunday night for Portland, Oregon, where he will study art for the next two years. Russell may be the shy one, but Glen's the one building protective fences and yet... The film's final sex scene is frank and it is here that Haigh and his two actors pull everything together. Cullen shows such depth of emotion on his face, embarrassments abandoned, he makes us feel the union of these two. As Russell finds the tender side of Glen, Glen encourages Russell to be more openly accepting of his own sexuality by play-acting as Russell's dad as he comes out (Russell having been brought up in institutionalized care, a very well adjusted 'orphan'). The latter is touching, if not entirely credible, but New, who resembles Alan Cumming crossed with Tim Roth and a bit of Ryan Gosling, almost pulls it off (Cullen favors Danish actor Nikolaj Lie Kaas without the heavy jaw). And just to prove that Glen's worldliness doesn't mean he has nothing to learn, Jamie proves the support link who enables the classic train station finale. Cinematography by Urszula Pontikos is creative. At one point, Glen talks to Russell about how the first time one has sex with a stranger, one becomes a blank canvas to project onto. Pontikos begins the scene by shooting their reflections in kitchen tile, slowly panning over and bringing the real people into frame. Music is used sparingly but effectively, with John Grant's "TC and the Honeybear" and "Marz" melancholy and moving. The film's setting in Nottingham in the British Midlands pays homage to the Albert Finney film "Saturday Night Sunday Morning."

Sophomore multi-hyphenate (director-screenwriter-editor) Andrew Haigh creates a thoughtful film of two very different people who may have found their soul mate. While this is a film about two gay men, it could just as easily be about two gay women or a woman and a man, making it a truly universal film. Russell and Glen are attracted to each other physically, initially, but as their weekend flows by, they begin to dig deeper into each other’s mind and hearts. An additional layer of drama comes from Glen’s announcement, late in their weekend, that he is moving to the US for two years to study art. This leads to the questions as to what will happen to the couple and their possible futures. The depth of performance by Cullen and New and their chemistry together makes for a good first-bloom-of-romance melodrama. The story is simply told with a lot of talking, some loving and much philosophizing over the meaning of life. The good thing is that Andrew Haigh wears all his hats well and shows a deft hand at all his chores.