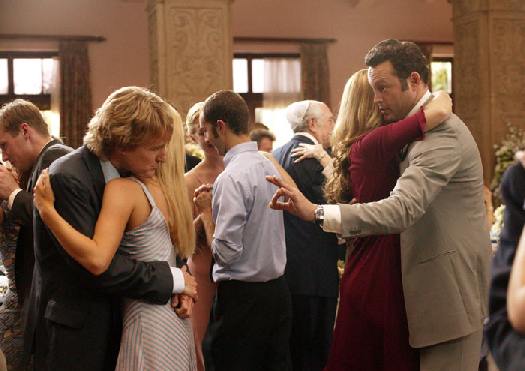 John and Jeremy's Rules of Wedding Crashing: "Invites are for losers" "Make sure she's single" "Never use your real name" "Dance like you mean it" "Free drinks, why not?" "If you can't cry, fake it" "Never leave a fellow crasher behind" It’s that time of year again: love is in the air and the sounds of wedding bells can be heard across the land. For John (Owen Wilson) and Jeremy (Vince Vaughn) this means lots of single bridesmaids looking for a man of their own, making the women easy targets for a one-night stand by the “Wedding Crashers.”

Long time friends John Beckwith (Owen Wilson, "The Life Aquatic with Steve Zissou") and Jeremy Klein (Vince Vaughn, "Mr. & Mrs. Smith") are in business together as unconventional divorce mediators down on the institution of marriage. The aging frat boys also have an unconventional hobby they practice seasonally each year - they're "Wedding Crashers." In supporting roles, Vince Vaughn has often provided much needed spice to bland movies, but "Wedding Crashers" gives him the opportunity to let rip as a lead and the man's simply hilarious. Vaughn and Wilson may be the new gold standard of comedy pairings, and their romantic pairings, with Isla Fisher ("I Heart Huckabees") and Rachel McAdams ("Mean Girls," "The Notebook") respectively, are also suitably mated. If only writers Steve Faber & Bob Fisher (producer and writer, respectively, of TV's 2000 series "The Trouble with Normal") had sidestepped some hoary cliches and come up with a better third act, "Wedding Crashers" may have been a comedy classic. As it is, it's a showcase for its stars and a solid effort for popcorn season. After an amusing on-the-job opener (Rebecca DeMornay and Dwight Yoakam cameo as a divorcing couple), director David Dobkin (Vaughn's "Clay Pigeons," Wilson's "Shanghai Knights") pulls out all the stops with an extensive montage set to creaky standard "Shout!" Our lads are pros - whether the wedding be Jewish, Indian, Irish, Chinese or Italian, they're always the life of the party. The frenzied action culminates in orgiastic champagne spurting intercut with the lads releasing their partners from a dance floor twirl to a landing on various hotel room beds. There's a problem, though. John feels guilty when his latest conquest, Vivian (Diora Baird), is deflated by his shallow behavior. In their late thirties, the boys may be getting too old for this. John cannot disappoint Jeremy, though, when his friend gets all excited about one last post-season bash - Treasury Secretary William Cleary's (Christopher Walken, "The Stepford Wives," "Around the Bend") daughter (Jenny Alden) is getting hitched in what is sure to be a high class event with top of the line food and booze. Jeremy quickly hooks up with younger sister of the bride Gloria (Fisher), but John falls head over heels for maid of honor Claire (McAdams) and breaks their first rule - he accepts an invitation to spend the weekend at the Kennedyesque seaside Cleary compound. The film is uproarious up to this point, but it begins to weaken as John must contend with Claire's hyper-obnoxious jock fiance Sack (Bradley Cooper, "Wet Hot American Summer"), a character of no redeeming value who Claire would never have put up with for so long. Jeremy, who had pinned Gloria as a 'Stage 5 clinger' that had him in a panic, makes a sudden about face and decides that he's into her. John and Jeremy both must also deal with unwanted advances from other members of the Cleary family. John has a Mrs. Robinson situation on his hands with Claire's mother Kathleen (Jane Seymour, TV's "Dr. Quinn, Medicine Woman") which is funny but lazily dropped by the writers. Jeremy attracts the attentions of Todd Cleary (Keir O'Donnell), the gay, artistic black sheep of the family, for unexplained reasons (it was John who took up the boy's defense at the Cleary dinner table). Sack calls a P.I. buddy to look into the guys and they're busted - not for not being the venture capitalists they claimed to be, but for being wedding crashers, an unbelievable bit of deduction from a casual snoop. The third act finds the two no longer speaking, with John crashing solo in a severe fit of depression, not unlike Adam Sandler's wedding singer on his downswing. (Their adjoining offices and joint business isn't addressed during this period.) John hooks ups up with Jeremy's old buddy Chaz, a funeral crasher played by a seriously over-exposed comic actor whose appearance is not welcome. While these continual lazy copouts mar the film, at least Faber and Fisher avoid the additional "Graduate" bit of having Claire's wedding crashed. But make no mistake - someone's wedding is while bride and groom are on the altar, and is disrupted ad infinitum... Owen, who's been paired with Ben Stiller ("Zoolander," "Starsky & Hutch") to contrast his laid back style against the Stiller's manic one, is equally matched with the funnier Vaughn. Their contrasting brands of seductive b.s. has Vaughn spewing tales of bullfighting while his sweeter buddy quotes Sarah McLachlan lyrics. Vaughn entertains his conquest battling a little boy's animal balloon demands while Wilson impresses the ladies dancing with the diminutive flower girl. Wilson's sweetness is beautifully matched by the incandescent McAdams, a Canadian actress with heaps of presence and a huge career in front of her. (McAdams gets her laughs *with* her laughs as she tries to suppress snorts during her sister's nautically inspired wedding vows.) Isla Fisher goes toe to toe with Vaughn's level of insanity, taking Gloria to true psycho nut levels with her googly eyes and unbridled enthusiasm for kink. Support also includes Ellen Albertini Dow ("The Wedding singer") as the Cleary's ribald Grandma Mary, Henry Gibson ("Nashville") as the family priest and Ron Canada ("Cinderella Man") as beleaguered butler Randolph. Often side-splitting and frequently sweet, "Wedding Crashers" is a great concept film kept aloft by its pitch perfect stars when its writing team runs out of steam.

Helmer David Dobkin and scripters Steve Faber and Bob Fisher have come up with a totally predictable but quite entertaining comedy that benefits mainly from a manic and funny comedic performance by Vince Vaughn and a charming one by Rachel McAdams that puts her infectious laugh and smile to exemplary use. As the title suggests, “Wedding Crashers” is about, well, crashing weddings. Ample time is given to this set up as John and Jeremy gird themselves for the upcoming wedding season with 17 different receptions on their list. The montage of weddings, the guys litany of ploys used to get in and have a darn good time – the key is to concentrate on those events that have an open bar, making the game both fun and cheap – is handled extensively and with good nature. John and Jeremy may be callous woman chasers but they are nice woman chasers. Predictably, something has to screw up their best-laid plans and for John and Jeremy this is the swanky wedding of the eldest daughter of US Secretary of the Treasury William Cleary (Christopher Walken). As usual, the boys do their usual crashing thing and begin their patter to impress the chicks and score. Then, John meets Claire (Rachel McAdams), the bride’s sister, and is struck by a thunderbolt. Meanwhile, Jeremy is on his own mission of lust and wastes no time bedding down Claire’s other sister, Gloria (Isla Fisher). Then, John changes the rules of engagement that he and Jeremy have so carefully lived by in their quest to crash by agreeing to join the Cleary family for a post-wedding weekend at their summer home so he can be with Claire. This is complicated when Gloria tells Jeremy, after their passionate interlude, that she loves him and will never let him go, plus some other things that cause him great consternation. Throw into the mix Claire’s possessive, macho hormone-laden obnoxious jock boyfriend (Bradley Cooper), a cantankerous grandma, a sex-starved mother (Jane Seymour) and an eccentric Kennedy wannabe (Walken) and things are, at least, amusing and entertaining. Director Dobkin (“Shanghai Knights”) shows a good hand for comedy and gets fully formed performances from all of his actors, star and supporting alike. The predictable story feels very comfortable in an old-fashioned way where romance and becoming friends are synonymous. Vince Vaughn does steal the show at every turn and Owen Wilson plays the more straightforward romantic lead well. It helps that he is opposite McAdams who is on a streak with “Mean Girls,” “The Notebook” and, now, “Wedding Crashers.” Walken, Seymour, Henry Gibson, Bradley Cooper, et al, help fill in the background characters well. Keir O’Donnell, as Claire’s creepy brother Todd, gets the most out of his small role, especially when trying to seduce Jeremy. Production design by Barry Robison meets the challenge, initially, by giving proper variety and detail to all the different ethnic and religion weddings that John and Jeremy crash. Equally well set is the sumptuous waterside site of the Cleary wedding and the Secretary’s elegant summer home. Editing by Mark Livolsi during the extended crashing montage is slick and fun to watch. Wedding Crashers” covers no new ground and could not be more predictable. In this case, this is a good thing for a film that comes at a time – the summer – where a comedy romance, done well, makes for an excellent air conditioning flick. (That’s the kind of summer movie that you go to on a hot day or night to escape the heat and get entertained to boot.) That ain’t such a bad thing and