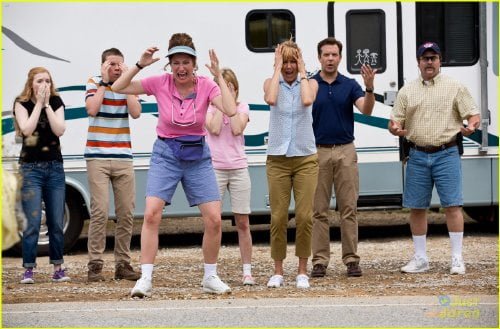 When pot dealer David Clark (Aniston's "Horrible Bosses" costar Jason Sudeikis) tries to help naive neighbor kid Kenny Rossmore (Will Poulter, "Son of Rambow") stop a bunch of thugs from robbing a homeless girl Casey (Emma Roberts, "Scream 4"), he ends up losing a backpack full of stash to them. To pay back the $43K debt, his boss Brad Gurdlinger (Ed Helms, "The Hangover") proposes he smuggle the next load out of Mexico. With no other choice, David decides a family in an RV is the ultimate disguise and convinces the two kids and his stripper neighbor Rose O'Reilly (Jennifer Aniston) to provide his cover in "We're the Millers."

A team of screenwriters ("Wedding Crashers'" Bob Fisher & Steve Faber, "Hot Tub Time Machine"'s Sean Anders & John Morris) have come up with a formulaic road trip movie spawned from the old National Lampoon vacation series, liberally sprinkled with trendy raunch. There's a few laughs to be had along the way and if there's any justice we should see a lot more of the truly talented Will Poulter, but this well-hyped comedy isn't as funny as its well cut trailer would indicate. You can see the screenwriting checklist from the onset as David (Sudeikis grown shaggy looks more overaged college kid than veteran drug dealer) runs into old friend Rick (Thomas Lennon, " 17 Again"), who envies his friend's 'freedom' as he's become slave to work and family. (It's disconcerting to note that Lennon's prosthetic pot belly is so obvious, we see the outlines of the rig clearly jutting out from his polo shirt.) Gurdlinger appears to be modeled on a "Despicable Me" villain, with his new Orca wrecking havoc in his shark tank. A road trip with two hostile women and a filter-free lad spells bad news for a covert operation, but although each causes problems, each will also come through in a moment of peril (kudos to the writers for Casey's (Roberts) quick thinking). But it's easy enough for us to see through Gurdlinger's treachery, so why can't Dave? Then the typical sexual miscommunications come into play with a squeaky clean couple who suddenly want to try swinging and a family 'incest' scene which may as well have been announced with a neon arrow. As the Fitzgeralds, 'Parks and Recs' Nick Offerman and "Wanderlust's" Kathryn Hahn at least prove adept with straight-faced improv. It'll be no surprise that everyone in the fake family all fall into their assigned roles by movie's end, although getting there, especially Dave's willingness to prostitute and endanger Kenny, is comically questionable (yet Aniston's 'stripper' never actually strips, her 'big moment' ripped directly from "Flashdance"). The film's highlight is the family bonding singalong to 'Waterfalls.' Although clearly left open for a sequel, the way the disparate group is kept together at least makes sense. "We're the Millers" is an average comedy with a few highlights, one of which is the closing credit outtakes.