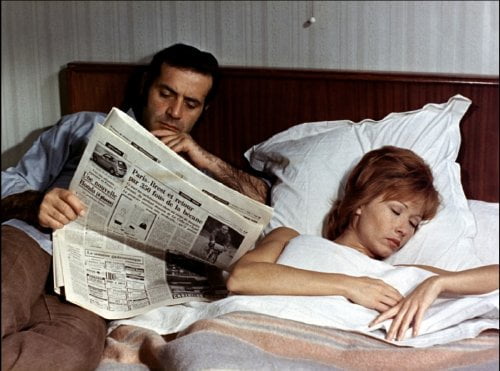 Catherine (Marlène Jobert, "Masculin Féminin") tells Jean (Jean Yanne, "Le Boucher"), her lover of six years, that his apartment is 'getting her down.' She accompanies him on a job for Pathe, filming in Camargue, where he treats her badly, even having dinner with her parents. She leaves, he finds her. He berates her for having no initiative and being ugly but she waits for him. She breaks off with him, then they fall in together again. Theirs is a relationship of psychological sado masochism whose outcome is clear from writer/director Maurice Pialat's ("Loulou," "Police") title, "We Won't Grow Old Together."

This semi-autobiographical film from Maurice Pialat is an uncompromising look at the romance between a twenty-five year-old woman and forty year-old man which is clearly headed to ruin, one in which each brings out the worst instead of the best in each other. Jean is a cameraman always short of money because he's patches together odd jobs. He can turn on the charm when he wants to, but has too little confidence to make bold moves. He even continues to live with his wife, Françoise (Macha Méril, "Belle de Jour," "Deep Red"), who is now finding what she lacked in their marriage with new friends she makes on trips to Russia. Françoise is Catherine, evolved by force. Catherine is too insecure to move on from Jean, clinging to the shreds of what used to make them work. Jean feeds on this, emotionally and even physically abusing her to keep her in his thrall. But as the cycle of their break ups to make up accelerates, she begins to understand she will never be happy with this man. The balance of power begins to shift. Pialat, who adapted the film from his own novel, presents an understanding of human nature in all its complexity and his actors are up to the task. Even Catherine's grandmother (Muse Dalbray) gets into the act, manipulating Jean into weeding her garden. And he knows he's been played, a master grudgingly respecting another. Cinematographer Luciano Tovoli ("Suspiria," "Titus") uses a gorgeous color spectrum, contrasting Catherine's red hair against baby blues - sheets, blouses, Jean's shirts. The apricots, blues and sand of summer gradually incorporate the yellows, rusts and greens of autumn as the relationship slowly dies. The production design is meticulously plotted. Jean references filmmakers and films - Chabrol, "Ordet," "Psycho" - to expound upon his own experience. Pialat made his own film to do the same.