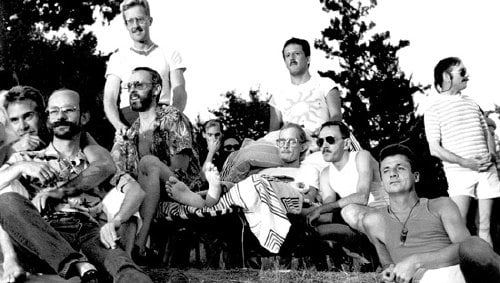 Directors David Weissman and Bill Weber take a reflective look back in time to the first days when the AIDS epidemic gripped the San Francisco gay community. The death and devastating health problems caused by the disease also rallied those around the victims to provide solace and comfort throughout their suffering. The filmmakers document these triumphs and tribulations in “We Were Here.”

At the end of the 1970's, San Francisco's Castro Street had become ground zero for gay communities in the United States. But then tragedy struck when city supervisor Harvey Milk, the country's first openly gay elected official, was assassinated. As crowds gathered in vigils they did not know they had a far more wide-sweeping tragedy right in their midst - the AIDS virus. Producer/codirector (with editor Bill Weber) David Weissman ("The Cockettes") honors the fallen, the survivors and those who helped both by documenting the intensity and the many issues surrounding the maelstrom which was the AIDS epidemic in San Francisco in "We Were Here." There have been many documentaries, articles, books and feature films which have dealt with AIDS, but I cannot recall one which makes so clear just what a horror it was to live through the time before the disease began to become treatable in the city which became synonymous with gay community. The word 'plague' has not been used lightly as people watched friends, loved ones and those they interacted with every day fall quickly and a public gripped by fear often lost compassion and even began to violate basic human rights. The film uses standard documentary techniques of still photographs animated by camera movement, archival footage and interview subjects - here five very well chosen individuals who each has a unique viewpoint to offer. From the man who initially had trouble fitting into a clickish community to the flower seller whose business spiked in ways he wished hadn't to the nurse who somehow kept going, their stories not only weave together to create a new whole but, like the AIDS quilt, honor those they knew and loved. It's astonishing to hear the statistics, and even more so to be reminded of how mysteriously the disease first appeared. A community which had been far from embraced was now under siege, and yet, it caused that selfsame community to pull closer together. The gay men who had had no time for the lesbian community found these women standing up to support them in many ways (blood drives, etc.) and strength was found in numbers. External forces who had only seen a promiscuous, deviant sexual group now began to see caring individuals and social activists. The amount of support that sprung up around San Francisco's AIDS victims - groups to provide art supplies, to take care of hospitalized people's pets, to be a 'buddy' to a sick person - was astonishing. Then there were the movements, especially in the early years of ignorance, to somehow identify the disease's victims, up to and including tattooing (Weber's cut to an emaciated man in a hospital bed pounds home the concentration camp analogy). There is also, of course, the loss. We hear of one mother who lost three sons in a row, of a man who lost his lover and best friend within two weeks of each other, of the father who told his son's gay doctor that he was more distressed to learn that his son was homosexual than that he was dying. It is a very moving piece of work. "We Were Here" is a heartfelt compendium of a time in history which should not be forgotten on the thirtieth anniversary of giving AIDS its name.

This is a heartfelt documentary about the days, which now seem so long ago, when the carefree gay culture in San Francisco thought that STDs were only a nuisance and could be cured by taking a pill. Then, in 1976, things changed. In that year the first case of AIDS in the city was diagnosed. Just three years later, 10% of gay men in SF were diagnosed with the disease and, by 1981, 20% of gay men contracted AIDS. The numbers just kept going up until fully 50% of the San Francisco gay community had the disease. The filmmakers gather an enormous amount of material from the obituaries run by the gay newspaper, the Bay Area Reporter, during the height of the pandemic. The paper published hundreds upon hundreds of obits of the victims and kept the community informed as to the progress of the disease. The highlight of this dedicated journal came only in 1998 when the headline read “No Obits!” However, “We Were Here” is not just the stories of the early victims of AIDS. Weissman and Weber spend the bulk of the screen time introducing the families and friends who gave care and solace to the victims during those deadly early years. Talking head interviews with these caregivers tells of the bravery and selflessness of those who stayed by the sides of the victims when the “real” world wanted to quarantine them into oblivion. Time is also spent on the research, or lack thereof in the early days of the disease, which slowly and painfully searched for the “magic bullet” cure. It was not until after much pain, suffering and death of the AIDS victims did the pharmaceutical companies put the effort to find a cure. After years of trial and error it was final discovered that there was no one “pill” to fix the problem but a cocktail of ingredients needed to conquer the disease. The audience for “We Were Here” is limited, at best, but, for the gay community and the student of documentary filmmaking, this is a work that chronicles the very beginnings of a disease that shook the world for decades.