We Are Still Here 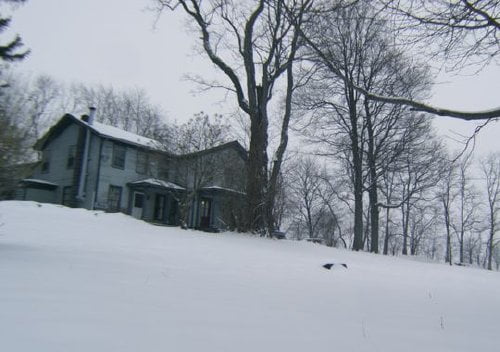 After the accidental death of their college-aged son Bobby, Anne (Barbara Crampton, "Re-Animator," "You're Next") and Paul Sacchetti (Andrew Sensenig, "Upstream Color") retire to an old New England home. Anne immediately feels Bobby's presence in the house, but her psychic friend May (Lisa Marie, "Ed Wood," "The Lords of Salem") does not, sensing something altogether more evil in "We Are Still Here."

Add writer/director Ted Geoghegan's (writer "Don't Wake the Dead") name to the list of filmmakers rejuvenating the horror genre of late. This throwback to films of the 70's and 80's features a cracking cast, cinematography (by Karim Hussain, "Antiviral") that invites one to peer into corners and a unique score (Wojciech Golczewski) featuring wooden wind chimes that calms and unsettles in one go. Left to unpack by a skeptical Paul, Anne goes into the ancient basement to investigate a noise and finds a baseball mitt marked as Bobby's moments before the baseball she'd put in a box comes bouncing down the stairs. She finds this comforting, unaware of a matronly figure standing in the shadows. Later, as she sits watching TV with Paul, Hussain's camera veers to their left, disclosing another figure exiting the hallway. A few nights later, a knock on the door turns out to be Dave McCabe (Monte Markham, "Pirahna") and his nervous wife Cat (Connie Neer), drawn by lights in a home that's been vacant for decades. Over Paul's ever present J&B, Dave gives an almost lip-smacking run down of the house's horrible history, a former funeral home run by the criminal Dagmar family. According to Dave, the house 'needs new souls' and will benefit from its new family. Paul's attempts at diverting his wife from their recent tragedy take another step back when he learns she's invited her psychic friend May and May's stoner husband Jacob (Larry Fessenden, "You're Next") to check out the house. They take the couple into the weirdly inhospitable town of Aylesbury's Buffalo Bill's bar and grill. In their absence, May and Larry's son Harry (Michael Patrick) and his girlfriend Daniella (Kelsea Dakota) arrive and dive into Paul's Scotch, but when the two older couples return, they don't even know they've been there. The next day the two women go shopping, Larry decides to perform a seance and the real fun begins. When we actually get to see them, the ghouls, who emit a strong odor of smoke, are actually kind of hokey, but Geoghegan keeps things tense with a steam-rolling build into a gory climax. Practical effects aid in the nostalgic feel of the film, as does the casting of horror vet Crampton. Sensenig hits the right note of slightly daft skepticism. Fessenden's presence is always a treat and he aces a juicy bit of possession. And while one wouldn't think overplaying a good thing, Monte Markham shows how it's done. In addition to framing for maximum creeps, Geoghegan uses the windy, snowswept landscape to add an air of desolation (upstate New York stands in for New England). There's humor, too, like the way the two couples are barricaded behind Buffalo Bill's 'Please Wait to Be Seated' sign like livestock awaiting slaughter. "We Are Still Here" isn't exactly terrifying nor surprising, but it's a damned enjoyable horror outing by a filmmaker who knows his way around the genre. Grade: