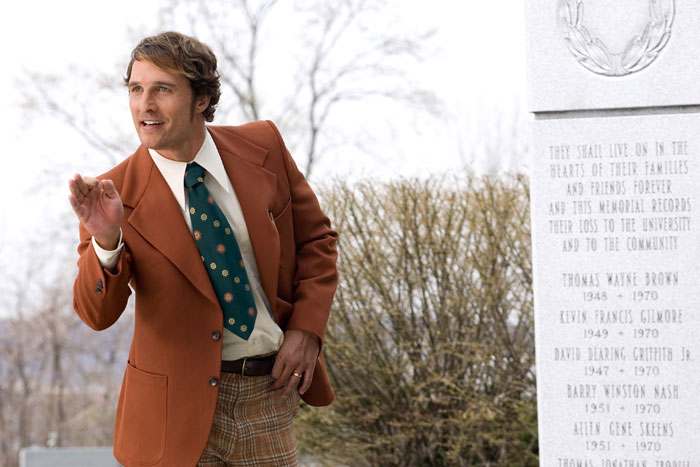 In 1970, nearly the entire Marshall University football team, the Thundering Herd, eight coaches and 25 fans from Huntington, West Virginia plus the flight crew of their chartered plane were killed in a flaming crash while returning home from a hard fought victory. In the wake of this tragedy, university president Donald Dedmon (David Strathairn) wrestles with making the decision to suspend the football program for the year, if not longer. The people of Huntington won’t hear about quitting and pull together to back Jack Lengyel (Matthew McConaughey), the newly hired head coach for the devastated team, as he tries to create a whole new lineup of players - the young Thundering Herd - in “We Are Marshall.”

This is a surprising well-done sports movie with a heart by videomaker turned filmmaker, director Joseph McGinty Nichol ( or McG, as he prefers). He is best known for his music vids, TV series (“Supernatural,” The O.C.”) and “Charlie’s Angels 1 & 2” and his flashy past serves him well with “We Are Marshall.” This is the story of one town’s tragedy as all but two of their Herd is killed in the deadly crash. Outsider Lengyel is hired to raise the phoenix from the ashes of the stultifying event and he proceeds to bend every rule he can to get a new team formed ASAP. It’s a daunting task but the new coach, and the town, is up for the challenge. This is one of those part inspiration/part perspiration rags-to-riches flick that you’ve seen before. In this case, the duplication of past efforts, like the entertaining “The Replacements,” is a pleasant trip that touches the usual bases. What makes this a better film than it has a right to be are the true story on which it is based, engaging performances by Matthew McConaughey, David Strathairn and company and football game scenes that are, at times, electric. McG’s music video background is most evident during the gridiron action and his fast paced, fast edit style serves it appropriately. The script, by Jamie Linden (from a screen story by Linden and Cory Helms), doesn’t cover any new territory but it shows that homework was done to create an evenly paced, sometimes melancholy, sometimes action packed drama that has a lot of heart. Things don’t turn out as expected – the team doesn’t go on to win the world championship with its ragtag group of untested players – but the victory the team does have shows they, their coach and the people of Marshall are united as one in honor of their fallen comrades. With so many big, Oscar-worthy films being released at the end of the year, “We Are Marshall” will likely fall by the wayside at the box office. But, it is the kind of film that will fill that sports fan niche as an alternative to “Apocalypto,” “Letters from Iwo Jima” and “Blood Diamond” and “The Good Shepherd.” It will do well, too, in the ancillary market after the year-end contention is all done.