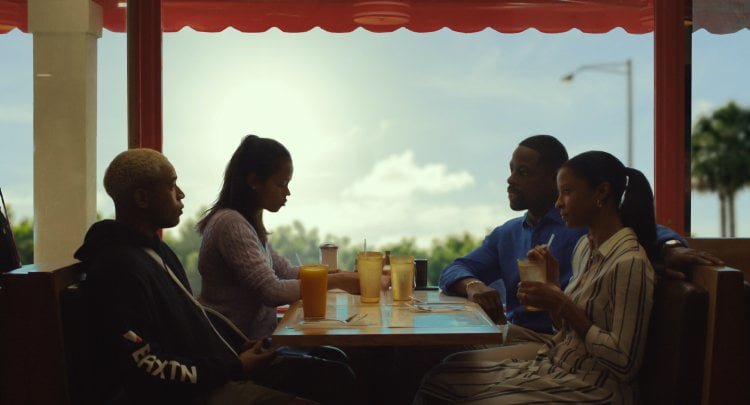 Tyler Williams (Kelvin Harrison Jr.) is a high school senior, wrestling team star and BMOC. But, he is hiding a secret injury and refuses to tell anyone, neither family nor friends. This secret will prove a disaster for the young man and his family in “Waves.”

Ronald Williams (Sterling K. Brown) thinks he has to be unrelentingly tough on his eighteen year-old son Tyler (Kelvin Harrison Jr., "It Comes at Night," "Luce") in order for the boy to succeed within a racially imbalanced system. Because of this physical and intellectual focus, his younger daughter Emily (Taylor Russell, Netflix's 'Lost in Space') receives less attention, which might just be to her benefit as Tyler goes under while the family crests “Waves.”

Writer/director Trey Edward Shults burst onto the scene with “Krisha,” a brilliant work about addiction and family starring his aunt and filmed in his parents’ house. Part of its power was Shults’ uncanny ability to give his drama the stylings of a horror film, the genre he embraced for his second family portrait in his sophomore film “It Comes at Night.” His third outing proves as dazzling as his first, a film split in two by its tragic midpoint climax, its first half both visually and aurally unsettling, its second calmer and hopeful. Cinematographer Drew Daniels ("Krisha," "It Comes at Night") leans on red to express Tyler’s suppressed rage, then favors a rainbow spectrum for sister Emily’s blossoming romance and family healing.

The film’s South Florida setting is established right out of the gate, Daniels’ camera providing a 360 degree view of the interior of Tyler’s car, the young man with the bleached blond hair singing along to Frank Ocean with his ‘Goddess’ girlfriend Alexis (Alexa Demie, "Mid90s," HBO's 'Euphoria') as they cruise over bright blue water. It’s both joyful and nerve racking, Tyler’s distracted driving combined with limbs exposed outside his car projecting a “Hereditary” vibe. When stepmom Catharine (Renée Elise Goldsberry) drops him off later, Dinah Washington’s ‘What a Difference a Day Makes’ is both soothing backdrop and ironic warning. Both parents support Tyler’s wrestling, but dad really pushes it, admonishing his son after a winning bout that it he’d ‘done it the way I showed you, you would have had him 20 seconds earlier.’ Weight training and constant criticism overpower Ronald’s more supportive and philosophical instruction of his son.

Tyler hides a serious shoulder injury from everyone, one which his doctor warns will be permanent if he doesn’t undergo immediate surgery. Things go even more seriously wrong after Tyler has a bust-up with Alexis and feels he’s lost control…

Emily, who was a silent observer to her brother’s downward spiral, draws inward until she’s awkwardly approached by Luke (Lucas Hedges), who wrestled with her brother. He’s a lovely, gentle boy who lost a parent just like her, although his was through estrangement after years of abuse. Their romance evolves, but when Luke learns his dad (Florida based filmmaker Harmony Korine) is on the verge of death in a Missouri hospital, she knows he won’t forgive himself if he doesn’t say goodbye and the two take off on a secret road trip.

Shults distinguishes Tyler and Emily’s stories visually, sonically and tonally, yet connects them through an evolving score by Trent Reznor & Atticus Ross ("The Social Network") and several story callbacks. Emily will tell Luke about how ‘What a Difference a Day Makes’ always brings her back to her grandparents dancing. Her disabled cat, treated with annoyance by her brother in the first half will be approached tenderly by Ronald in the second, a sign of his own evolution. A scene of the family in Church, where Ronald chides Tyler for his sleepiness, is repeated later with only dad in the pew. If Emily is background in the first half, Tyler haunts the second, her brother’s intense relationship with their father reversed with a father daughter fishing trip in which Ronald opens up.

The cast is uniformly excellent, but it is the little known Russell who really breaks out, her quiet reserve projecting strength, love and hard-fought forgiveness. Hedges has never seemed this openly vulnerable on screen before, creating a beautiful dynamic with his costar. The production is steeped in its Florida location, yet the Williams’ home’s interior is remarkably similar to the unique layout of Shults’ parents’ Houston home. In addition to Reznor and Ross’s distinctive score, the soundtrack features multiple tracks from Frank Ocean, Kanye West’s ‘I Am a God,’ Radiohead, Amy Winehouse and more.

“Waves” is a compelling family drama that plunges you into a nightmare before pulling back into an embrace. With just three movies, Trey Edward Shults has put himself on the map as one of America’s most creative filmmakers.

When we first meet Tyler, it is an idyllic time with his love for wrestling and an even greater love for his girlfriend Lexie (Alexa Demie). His athletic skill and ability assures a college scholarship and a good life. His domineering father, Roland (Sterling K. Brown), is always pushing his son to excel in his sport, while his stepmother, Catherine (Renee Elise Goldsberry), is always there with her support.

Tyler wins his next meet but his shoulder is causing him pain. He has an MRI taken and the doctor has bad news – he has a SLAPP tear that needs an immediate operation to prevent permanent damage, which will end his wrestling season. The headstrong young athlete, of course, refuses to follow his doctor’s advice to the expected disastrous results. Then, Lexie tells him that she is late having her period.

That is the crux of the first couple of chapters of “Waves.” What follows is a miniature epic story of a family torn by Tyler’s bad decision. What was once a tightly knit family unit falls apart after Tyler commits a violent act which effectively ends his life as a free man at just 18-years old. The act fractures his parent’s marriage and, even worse, if possible, is the impact on Tyler’s younger sister, Emily (Taylor Russell), whose brother is now a convicted murderer. Her turmoil and withdrawal from family and friends is tempered when she meets Luke (Lucas Hedges), a kindred spirit.

The small but excellent cast give full dimension to each of their characters as we watch a once solid family fall apart for a moment’s drug and booze addled action by Tyler. His life, as he knows it, ends and the waves of his action resonates through those closest to him. Kelvin Harrison Jr. and Taylor Russell give star-turning performances and the veterans, Brown and Goldsberry lend power to their parental performances, too. Writer-director Trey Edwards Shults stands out running things behind the camera.

At first, with the charismatic Tyler the center character, I expected the story to go a certain way. Then, the crossroads are joined and the story I thought I was watching changes direction and scope and incorporates the entire family into the film’s fabric. It is a gripping story that does not go as expected and that is what makes “Waves” a cut above.