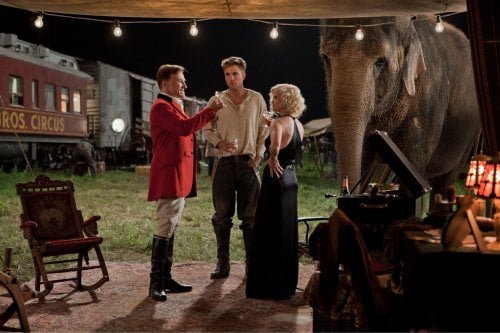 Jacob (Robert Pattinson) is a veterinary student who lost his parents and had to drop out of college, another statistic of the Great Depression. Bumming along the railroad lines, he hitches a ride on a passing train but is rudely ganged up on by other travelers aboard. It is a circus train and the would-be vet is befriended by the owner, August (Christoph Waltz), his beautiful star performer wife, Marlena (Reese Witherspoon), and an extraordinary pachyderm named Rosie in “Water for Elephants.

After losing his Polish parents and, as it turns out, their home at the height of the Great Depression, Jacob Jankowski (Robert Pattinson, "Twilight"), a veterinary student at Cornell, jumps a train one night. That train just happens to be transporting the Benzini Bros. Circus and after meeting its owner, August (Christoph Waltz, "Inglourious Basterds"), who orders the young man 'redlined,' it's suggested that perhaps he would be ideal for the job of getting "Water for Elephants." Richard LaGravenese's ("The Fisher King") adaptation of Sara Gruen’s beloved 2006 novel 'Water for Elephants' focuses on the love triangle of Jacob, August's wife and star attraction Marlena (Reese Witherspoon) and August, who he's folded together from the books head animal trainer and owner Uncle Al, to the detriment of many of the colorful supporting players in the novel and director Francis Lawrence ("I Am Legend") concentrates on beautiful period production design and camera work (Rodrigo Prieto, "Brokeback Mountain") but doesn't give his film any oxygen. Reese Witherspoon, made up to look like platinum blonde bombshell Jean Harlow, fits the era and does well with her circus stunts, but Marlena has no character other than her back story and no spark at all with her costar Pattinson (who played her son in "Vanity Fair," but was cut from the film). Tai, the elephant who plays Rosie, has more charisma than her costars. The film uses the present day bookending device of the novel and Hal Holbrook convinces of more passion as a nursing home runaway than Pattinson does in his flashbacks. The irony of the story is that the young man who is hired to care for animals is working for a conflicted boss, insecure in his marriage to a trophy wife, who takes out his aggressions on the poor beasts who help support him. Jacob first notices Marlena as she frets over Silverstar, her white horse. He diagnoses the problem as a painful condition which will cause the horse to founder within days, but August tells him to squeeze out remaining performances from it. Jacob, with Marlena's help, puts the horse down instead and almost gets redlined (thrown out of the moving train at night) for his trouble. At least this is a temporary solution for the poor wild cats who've been being fed turned meat. There are three set pieces where August and Marlena are accompanied by Jacob to 'celebrate' and each turns ugly when August's jealousy flairs up. The repetition actually gets a little tedious, as there is little tension between the pretty two. Pattinson shyly smolders and Witherspoon withdraws. Waltz does a less witty version of his Hans Landa, with quicksilver moods between showmanship charm and sadism. It's to his credit that he manages to make us feel for his inner turmoil despite his cruelty. There are horse acts and acrobats and clowns and lion taming and tightrope walking, but what's lacking is the real nitty gritty feel of circus folk (see the documentary "Circo," also opening today in Boston, for that). We get hints of the back tent stripper action, but not enough interplay between Barbara (Donna W. Scott, "The Uninvited") and Jacob. There's the rummy mentor Camel (Jim Norton, "The Eclipse") whose eventual redlining causes the climactic uprising, but not enough of Jacob's dwarf roommate Kinko (Mark Povinelli), whose Jack Russell terrier was such a strong presence in the novel, only alluded to here. The film needed more freaks and less finery. The actors all shine more when performing with Tai and the animal trainers did a great job with both her and all her costars during the chaotic climax. It's telling that Jacob and Marlena's bond seems far stronger in a series of black and white stills shown at film's end than it does during the actual film. That's probably due to Holbrook again. "Water for Elephants" is a pretty movie, but when Tai's not on screen, it's pretty dull.

Not having read the novel that “Water for Elephants” is based on, by Sara Gruen, and being less than impressed by Robert Pattison as an actor, I was prepared to be critical of “Water for Elephants.” I was pleasantly surprised to find it a well-crafted period piece that does a beautiful job in capturing the harsh times of 1930s America reeling under the financial disaster of the Depression and a circus trying to survive. The Benzini Brothers Circus is the sole entertainment in a Middle America that suffers through its hand-to-mouth existence. However, Anton’s beloved circus is going through the same economic woes as the country and in danger of having to take down the Big Top for good. He is a showman, though, and shrewd bargainer and comes up with a solution that not only will save his circus, it will pack them in. He introduces us to Rosie and, as happened to Jacob, it is love at first sight. Acting is fine but not stellar. Pattinson, though a bit wooden, is a good springboard for his costars. Reese Witherspoon is a yeoman actor and she does an impressive job as circus star attraction and trick horseback rider. Christoph Waltz is also fine but, with a performance that harkens to his evil SS colonel Hans Landa in “Inglorious Basterds,” he is in danger of being stereotyped. He does crazy well, though. But, the real star of “Water for Elephants” is, of course, an elephant and Rosie is a talented charmer that does some amazing physical things that you would never expect a pachyderm to be able to do, like stand on her head. When Rosie enters the picture, the film ratchets up a notch. And, Pattinson and Rosie show surprising and touching chemistry, more so than with his human costars. Rosie should have gotten star billing. Techs are first rate. Cinematographer Rodrigo Prieto captures the look and feel of a 1930s traveling circus with a slight sepia tone. He also lends a claustrophobic look, at times, with the use of many extreme close ups. Production design, by Jack Fisk, and art direction, by David Crank, are superb in envisioning the rough and tumble backdrop of the circus. Costume, by Jacqueline West, is excellent on all levels, especially for Reese Witherspoon. Impressive, too, is the fact that live, not CGI, circus animals are used, lending further to the realism of 30s circus life. The screenplay, by Richard LaGravenese, feels like a trimmed down version of a much denser work, with perfunctory treatment to scenes that are obviously much more extended in the book. Francis Lawrence skillfully handles the complex helming chores of directing humans and animals Still, for a film adaptation of a famous novel, it does a sound job telling a good story. This is something that does not happen often.