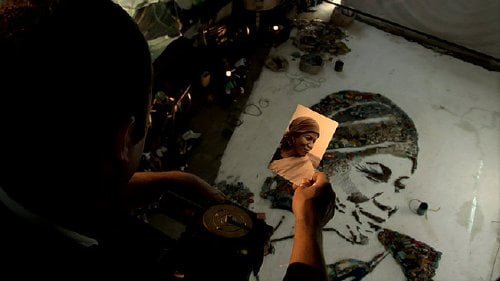 Contemporary artist Vik Muniz takes on a journey of discovery as he introduces us to the world’s largest landfill, Jardim Gramacho on the outskirts of Rio de Janeiro, and the catadores, the pickers of recyclable material who, literally, live off the “Waste Land.”

Brazilian artist Vik Muniz was working at his Brooklyn studio when he got a call from the director of his Rio de Janeiro space with a potential artistic find. Muniz, whose work making portraits of Caribbean children from the sugar that indentured their parents, would find his next grand inspiration in his home country. Codirectors Lucy Walker ("Devil's Playground," "Blindsight") and Karen Harley follow him as he befriends the pickers, three thousand workers who recycle trash at the Jardim Gramacho landfill, a human and garbage "Waste Land." This wonderfully structured documentary addresses many subjects in one - the place of art in the world and its value, the ecological cost of not recycling, the pride people can take in honest work and the societal impact of briefly opening doors to the under privileged. Walker and Harley build upon the work that Muniz is creating with recyclable materials, turning their cameras on huge piles of garbage and the people picking through it with a poetic eye. It's a surprisingly beautiful film with a strong humanistic slant. The film begins with Vik as a guest on a cheesy Brazilian talk show, then steps back to tell its story. Once Vik speaks with Fabio, he begins to check out the ironically named Jardim Gramacho, the world's largest garbage dump, on a map and notes that it is the literal end of a line, a place where both people and junk are left. It's surrounded by favelas and heavy drug trade, yet the people Vik meets there are hard working laborers who pick to avoid lives of crime (only one of Vik's subjects, Suelem, is connected, having children with a drug peddler who fails to support them). The first person Walker shows us connecting with Vik is the funny Isis Rodriguez, who loves having her picture taken and who, perhaps, will be most emotionally affected by this outsider. The pickers' president, young Tiao, and their illiterate VP, the aged Valter, fill in lots of information about the group. It is astonishing to learn that a city the size of Rio does not have a recycling program in this day and age, but the after-the-fact pickers cull the output of a city of 400,000 every single day. This group built a recycling center with no city funding, but now the mayor wants to sell the land that it is on and they are fighting this. We see the garbage-laden trucks pull up and the pickers gather around, all looking for their specialities (PVC for some, paper for others, etc.). Isis uses a barrel so dented and rusted she must have recycled it. Valter tells the filmmakers a story about the importance of a single discarded can that the group knows well - that 99 cans will not be 100 without it. Besides these three we meet Zumbi, who has made it a mission to save books (he's read The Da Vinci Code and The Art of War, while his haul has allowed the political Tiao to read Machiavelli's The Prince!). Eighteen year-old Suelem has been a picker since the age of 7. She eats what she finds there (sometimes there is yogurt!). The expectant mother of two tells the horrifying story of having found a dead infant among the piles of trash. Auntie Irma is a cheerful cook who uses the best of the discarded foods the truckers bring directly to her to cook for everyone. Once the people and their place have been established, it's time to take them to Muniz's studio and begin creating art. He's taken photographs of them in their habitat (Tiao suggests and poses in a recreation of Jacques-Louis David's Death of Marat painting with an abandoned tub!). Now he has them blown up to the size of a room and the pickers are asked to find items they've picked to fill in backgrounds and shadow. The final works are smaller photographs that look like the originals until one steps in and sees what comprises them. The final act questions how this project will affect the people who now must go back to the landfill. Isis, who used to seem so happy there, begs to be kept on at the studio. Vik wants to bring the group to London for an exhibition and auction. One of his colleagues fiercely objects but Vik goes ahead anyway and turns out to be right. (Vik shows Tiao Damien Hurst's 'Pharmacy' and says it's worth a million and one cannot help but thinking what a load of crap. Tiao's Marat portrait fetches $55,000.) In addition to the directors and the beautiful camera work, editor Pedro Kos has done a great job building the material and Moby has composed a great score which is especially effective during montages. The film ends back where it began, at that same talk show, but now its not Vik who's the guest but the self-assured Tiao! An ending credit revisit shows everyone in a better place than where they began. "Waste Land" is a must see documentary for lovers of the genre.

As “Waste Land” opens, it gives the impression that it is a documentary about Vik Muniz and his photos that centers on the environs of Jardim Gramacho. However, directors Judy Walker, Karen Harley and Joao Jardim deliver much more. This is a documentary exploration working on many levels – with Muniz’s artworks just the tip of the iceberg. The real meat of the study is about the denizens inhabiting and living off of the massive land fill. The filmmakers deftly combine how Muniz creates his art with in depth studies of those who inhabit Jardim Gramacho. The citizens of the landfill scavenge the fresh deliveries to collect and sell the recyclable trash. It is a 7/24 business and the pickers amass and recycle the equivalent of the refuse discarded by a city of 400000. While this desolate landfill seems to be the bottom of the barrel for its workers, in fact it is a world where there is no crime, no drugs and no violence. The pickers live in harmony with everyone giving their all to their “job.” They pick through the rubbish of restaurant discards and one woman, a profession cook, creates amazing meals for the catadores and “no one goes hungry.” Interspersed with the inspirational stories of the pickers are the creations of Vik Muniz, who uses the film’s subjects as the inspiration and models for his art. While they are at the bottom of Brazilian society, they are far from ignorant. Books, some classics like Machiavelli’s “The Prince,” are collected and read by the catadores and often quoted. Shakespeare would be proud of his new, dedicated audience of pickers. Techs bring out the beauty of a place that would be considered a blight anywhere else in the world. Dudu Miranda, lensing the documentary, photos “Waste Land” with vibrant clarity that brings out the quality of life in Jardim Gramacho. The behind the camera team makes palpable the unity and cooperation among the pickers as they work to become a political force in their country, a pickers’ union. This is an eye opening account of human dignity.