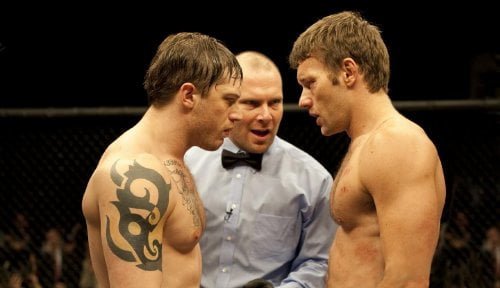 Tommy Conlon (Tom Hardy) has a hidden past and wants in on a Mixed Martial Arts tournament with the winner getting a cool $5 million. His estranged older brother Brendan (Joel Edgerton) is in danger of losing his home and, because of his taking part in an illegal parking lot fight, loses his school teacher job. He, too, wants a shot at the prize that could save his family and his home and the brothers will compete to see who is the best “Warrior.”

Squeezed by the economy, high school physics teacher Brendan Conlon (Joel Edgerton, "The Square," "Animal Kingdom"), a former middling UFC contender, convinces Frank Campana (Frank Grillo, "Pride and Glory") to train him for Sparta, a 16 round Mixed Martial Arts competition for the world's best fighters. What he doesn't know is that his estranged younger brother Tommy (Tom Hardy, "Bronson," "Inception") has turned up on the doorstop of both their estranged father, Paddy (Nick Nolte), to train for the same Atlantic City event in "Warrior." Cowriter (with Cliff Dorfman of 2005's Entourage and Anthony Tambakis)/director Gavin O'Connor ("Miracle," "Pride and Glory") also takes a story credit with Dorfman for what essentially plays like a ludicrous mashup of the dysfunctional family of "The Fighter" and the entire Rocky series. The film features some fine acting, but all but Nolte are let down by incomprehensible character motivation and fairy tale arcs. The film's tagline should be 'the threat of foreclosure is better than steroids.' Paddy's thrilled to find his son Tommy returned after fourteen years, but Tommy, who tries to push a drink on dear old reformed dad, isn't there for forgiveness or trips down memory line. He just wants to move in, be trained and remind dad what an awful father he was. Meanwhile, beloved teacher Brendan (we know because of the quartet of students, perfectly balanced between race and gender, that represent his class) gets suspended for a fighting match held in the parking lot of a strip club. His wife Tess (Jennifer Morrison, 2010-2011 season 'How I Met Your Mother') isn't happy either, preferring her husband not risk his hide even though their mortgage is 'upside down' due to the huge medical costs they incurred saving their youngest daughter's life. When Paddy drives from Pittsburgh to Philly to let Brendan know that Tommy's returned, Brendan not only won't let him in his house, but denies him the chance to meet his two adorable granddaughters staring from the front screen door. And this is a film that's causing Oscar buzz and critical back flips? It goes even more over the top. Announcers at Sparta (one of whom, cameoing screenwriter Anthony Tambakis, should have been in hiding instead) diss Brendan as a no account and become enthralled with the mystery of Tommy, who's entered under his mother's maiden name. Meanwhile in Afghanistan(!) a Lieutenant Corporal catches a glimpse of Tommy on a grunt's laptop and immediately recognizes him as the mystery Marine who showed up to save his platoon by 'ripping off a tank door!' Paddy weeps over his son's heroism, but just wait for the further melodramatic turn of this particular screw. Then there are the blatant Rocky rips. Tess Conlon IS Adrian Balboa, from her worries over hubby's beatings to her sitting out of his major fight in spectator montages only to show up at the last minute. And, like "Rocky," those who kept the big lug down, in this case sympathetic Principal Zito (Kevin Dunn, "Transformers: Dark of the Moon"), make for great comic relief cheering him on. Sparta entrant Koba (1996 Olympic Gold Medal winning wrestler Kurt Angle) is a substitute for Dolph Lundgren's unbeatable Drago and if the film's predictable to a fault, you at least won't believe which brother takes him down. The classic fight imagery - the showgirl parading the round number, the varying choreography of the fighters entering the stadium - all straight out of "Rocky." Hardy has bigger acting buzz than Edgerton, but it's the Australian actor who, despite the ridiculous odds his character overcomes, paints a more realistic picture. He gives a low key performance and his handling of his bashed family dynamics plays true. British actor Hardy makes Tommy a seething lump who's supposed to have a tender heart when it comes to fellow Marines but who can't cut his brother a shred of understanding. It's not Hardy's fault that the writers have given his character the unbelievable choice of choosing a man he will not talk to to train him ("Rocky's" Mickey taken to extremes), but the actor cannot save his character from unlikability until he's been beaten to a pulp. Nolte is very good as the alcoholic dad trying to reconnect with kids he's doled out nothing but damage to, his burden of hurt and guilt building to an explosive scene. Grillo's interesting as Frank, but again, the writers make his character too gimmicky with a classical music training method and an emotionally manipulative ringside manner. Everything here leads up to the fights, of course, and, despite the film's two hour plus running time, they're given short shrift. We don't really see how 16 fighters are pared down to 2 and Tommy isn't given anywhere near the same weight as Brendan. The uninitiated will not know anything more about mixed martial arts than they did before seeing "Warrior" and final rounds are edited to distraction. The commentators' repeated shouts of 'It's a miracle!' seem like nothing but a plug for O'Connor's better, previous film. Maybe it's a 'guy thing' as one fellow critic commented to me after the screening, but "Warrior" just boils down to brute force pushing an overtly sentimental agenda.

Writer-director-producer Gavin O’Connor (“Miracle”) likes the underdog sports film and trots out a Rockyesque drama that has not one but two protagonists. Brother against brother seems like a good idea, at least to scribe O’Connor, but there is a problem with this. Sadly, 15 minutes into this 2+ hour tome, I knew, not guessed, knew exactly what was going to happen every step of the way, right up to the big finale. Not a good thing. This is a you-must-suspend-disbelief to believe as Tommy and Brendan vie for a spot in the last-man-standing tournament called Sparta, where 16 fighters will become 8, then four and, finally two. Big commotion is made with the arrival of Koba (Kurt Angle), the reigning Russian Mixed Martial Arts champion. Remember, only 16 can compete in Sparta, so it begs the question: Why would two down and out schmucks even remotely be able to get into such a high stakes. tourney? One would think the crème de la crème of the fight game would be clamoring for a spot. But, this is a fantasy rags-to-riches, brothers-in-competition saga that bargains on its “Rocky” and “The Fighter” influences, but tries to be more intense, and less inspirational, than its predecessors. It lacks, though, the charm of the underdog Rocky or the acting ability of Christian Bale, Melissa Leo and Mark Wahlberg. Edgerton and Hardy are physically capable as MMA warriors but are obviously not graduates of The Actors’ Studio. The two give meat-and-potato performances and veteran Nick Nolte brings nothing to the table as the battling-alcohol father, Paddy, who was responsible for the rift between brothers. Director O’Connor does a better job than his writer persona and “Warrior” is a good looking film. If another writer, someone that does not telegraph the entire story, was brought in to help the multiple hat-wearing O’Connor, there could have been some surprises in store for the viewer. We do not get that and