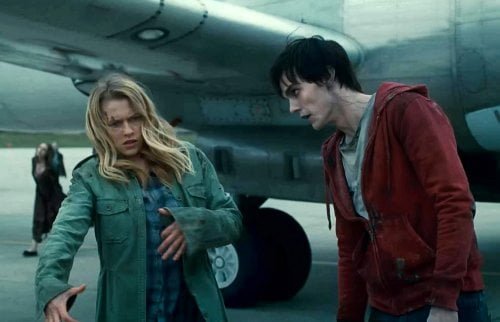 Julie (Teresa Palmer, "I Am Number Four") leaves her post-apocalyptic walled in city one day with a group to gather medical supplies when they are set upon by the zombies who inhabit just about everywhere else. But one walking corpse does something very strange - he saves her from his companions and takes her back to the 747 cabin he calls home. Julie realizes there is something different about R (Nicholas Hoult, "A Single Man"), and soon many of his kind are exhibiting increasingly "Warm Bodies."

Mix the current zombie craze with the new supernatural YA craze and "Warm Bodies" is the result. Writer/director Jonathan Levine ("The Wackness," "50/50") adapts the Isaac Marion novel without finding anything all that compelling in the material to focus on, so we must instead be thankful for an endearing performance from Nicholas Hoult to keep us occupied. He's like a biological Wall*E, living in a decaying wasteland, collecting snow globes and vinyl records before being struck by love at first sight. Hoult, made up with contacts, blood stained lips and bluish veins to look kind of corpse-like but still attractive, spends his days shuffling around an urban airport with his kind. His running voice over lets us know that this zombie not only can think, but is looking to feel something. He meets up with his 'bestie,' Marcus (Rob Corddry, "Hot Tub Time Machine"), at an airport bar where they choke out moans and the occasional actual word at one another, aping behavior from their pasts. Once R has Julie in his possession, his thoughts are consumed with making an impression ('Don't be creepy, don't be creepy, don't be creepy'), which maintains the film's gentle humor for a while. But the material is stretched to the breaking point. R has Julie. Julie accepts R but wants to go home. Others like R recognize the odd relationship and begin to yearn for the same. R follows Julie into her walled zone where he is in great danger. And of course it's Julie's own father, General Grigio (John Malkovich), who makes the rules and fails to be convinced that things might be changing. It's all a big huggable ode to looking beyond people's differences. As with other supernatural YA literature, standard mythologies are messed with. In this one, eating the brains of a human delivers the victim's memories to the recipient, giving the zombie a charge that makes it feel 'alive ' (R consumed Julie's boyfriend (Dave Franco, "21 Jump Street") before he saved her). Then there are the bonies, zombies so sunk into depression that they begin feeding upon their own flesh and become even more amped-up killing machines. In fact, the way they're portrayed here, they resemble terminators, either issued with lousy effects that make them look like videogame characters or by skinny guys in suits designed with too much meat on those bones in order to accommodate their occupants. The bonies are a convenient extreme classification to allow the other zombies to find common ground with the humans for the film's third act. Zombie love stories have been done before and there is little to recommend this one. Hoult is charming, yet he has better chemistry with the cunning Corddry than with Palmer whose character is less fleshed out than her corpse counterparts. "Warm Bodies," whose zombies acquire ET-like glowing hearts, tries so hard to be cute it's surprising Levine didn't have his undead all tilt their heads like puppies to communicate. It's the Hello Kitty of zombie flicks.