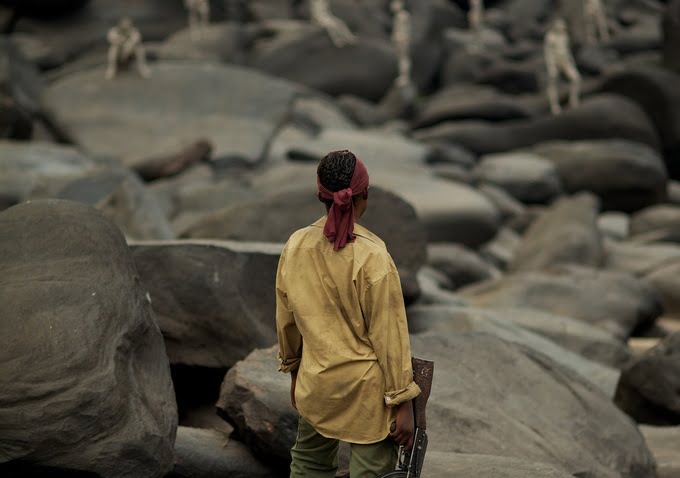 If we are shocked that a 14 year-old girl is already telling her tale to her own child, the two years just lived by Komona (the extraordinary Rachel Mwanza) may prove just about unbearable. At the age of 12, the happy child was kidnapped by Great Tiger's (Mizinga Mwinga) rebel soldiers after having been initiated by being forced to shoot her own parents. Komona will still hear from them, just as she will see the ghosts of countless others slain in a relentless civil war, and her special gift is noted by Great Tiger, who appoints her his "War Witch."

Writer/director Kim Nguyen, whose film just about swept his home country's film awards, takes us to a place most of us are lucky enough to barely imagine and does so with grace and sometimes even beauty. If you've read the news items yet cannot imagine how a child could kill her parents, look no further - Nguyen understands the psychology of warfare and in young Mwanza has found an incredibly sympathetic point of view. The little girl soon learns she cannot cry or she will be beaten. She is sullen like the other young recruits and just pushes on with the weapon she is told is her new 'mama and papa,' the boots or sneakers which may or may not fit, fueled by the randomly distributed rations which leave her and her like always hungry. They are fed 'magic milk' extracted from trees in the jungle and just after one such dose, Komona spies ghosts on the road who urge her to run. She is the only one of her unit to escape government soldiers and this is what elevates her status. But it is not only Great Tiger who notices her. A slightly older boy known as Magician (Serge Kanyinda) has slipped her food before and quietly always seems to have her back. He eventually persuades her to escape and the two make their way to his uncle's house and begin a blissful marriage. But life in the Congo is never easy and Komona's past comes rushing back twofold. Nguyen was inspired by a news item about twin 10 year-old warriors, but although he could have been satisfied with a straightforward telling, he has layered Komona's story with magic, folk lore, psychology, romance, the every day and unimaginable tragedy. His creation of Magician alone, an Albino, is so rich, adding not just a parallel to the ghosts Komona sees (people coated in white paste, eerie), but adding the subtext of societal prejudice. In a comical sequence in which Magician seeks to fulfill Komona's demand for her hand, which just happens to be yet another, unremarked symbol of himself, the presumably impossible item is found when he visits a community of his own kind. The story of Magician's uncle, Butcher (Ralph Prosper), has continuing reverberations of heartbreak (like Komona's). Another story point relies on an almost medieval form of revenge known as the 'poisoned rose. There are also happier customs, like the craft of making palm oil or meat cooked in banana leaves. The film is perfectly structured and paced. Cinematography by Nicolas Bolduc ("Next Floor") accentuates the horror of soldiers mown down by the automatic weapon fire of a small child or the beauty of honest work in lush surroundings. Artful sound design and editing carry the hollow clanging of a metal door into Komona's nightmares. "War Witch" is a magical film full of horrors, ironies and the resilience of the human spirit, all guided by a hand sure enough never to let the seams show.

14-year old Komona (Rachel Mwanza) talks to her unborn child about her life and how it was turned upside down two years before. Rebels in this unnamed African nation raided her peaceful village, force her to kill her parents (not killing them would be far worse – for her and them) and kidnap Komona into a chaotic and dangerous life as a girl soldier. Visions of the ghosts of those murdered during the brutal civil war haunt the girl and her prescience is recognized by rebel leader, the Great Tiger (Mizinga Mwinga), and he makes her his “War Witch.” This was Canada’s Oscar entry for Best Foreign Language Film this year and it deserved the attention and honor. Kim Nguyen and his film team journeyed to Kinshasa in the Democratic Republic of Congo to tell the story of one girl’s life as an unwilling rebel soldier and how she survives the deadly ordeals of being child-woman-slave-soldier. This harsh life is tempered, though, when Komona meets fellow child-rebel, Magician (Serge Kanyinda), an albino boy of her age and also considered supernatural, like Komona. This is where “War Witch” takes a turn from hard-boiled rebel drama and becomes, for a while, a romance. Komona and Magician, though only 14-years old, have survived life’s brutalities in their war-torn land. The harsh reality makes their falling in love easy and logical for the soldier-children and they decide to run away from the war. The two head to Magician’s uncle, the Butcher (Ralph Prosper), for refuge and, hopefully a life of peace, This is the time when Magician and Komona set off on a quest to find a white rooster (a rare commodity in this Sub-Sahara land) needed to follow tradition and allow them to marry. This chapter is the idyllic center of the film and the most heartening. The final chapter of the film sees Komona’s unwilling return to the physically and mentally demanding rebel life as a soldier’s whore with magical powers. This life sees Komona changed forever as she becomes a stronger woman as Magician’s baby grows in her womb. She is determined to give their unborn child a better life and future. Rachel Mwanza and Serge Kanyinda are riveting in their screen debuts and, as the film rolls forward, their characters take on a documentary-like realism, evoking real sympathy for Komona and the other children-warriors. The older actors do not have the prominence of the young stars but they do create a fully dimensional setting for the “War Witch.” Characters like the Great Tiger (bad) and the Butcher (good) are more than just symbols, though; they give political and social depth to Komona’s story. Kim Nguyen uses a documentary style to lend “War Witch” a verisimilitude of facts – like child rebels, kidnapping and murder – as a backdrop to what is really a love story between youngsters who are forced to become adults all too early in their lives. This is what impresses me most as the story weaves a tapestry of war and conflict in a volatile land, but it maintains a strong thread with its heart of innocence, that the inner-child is still alive in Komona.