War of the Dead on Blu-ray 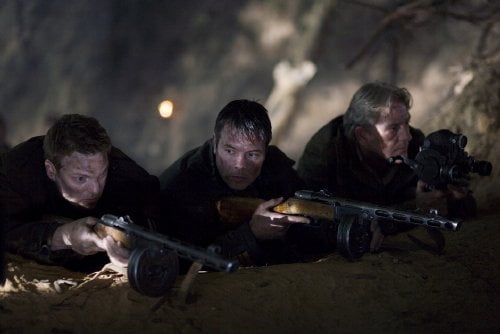 Early in World War Two, an American Army platoon is sent on a mission to Finland to investigate a secret bunker held by the German invaders. They run into one such group of Nazi soldiers and a firefight ensues, ending with the Germans dead. But, the stalwart Yanks soon find themselves in battle with the same soldiers they just killed in “War of the Dead.”

In 1939, the Nazis were conducting secret anti-death experiments with Russian soldiers in Finland, but they abandoned them and buried their subjects. Two years later, American Captain Martin Stone (Andrew Tiernan, "300," "Mr. Nice") leads a unit into the same area with Finnish guide Lieutenant Laakso (Mikko Leppilampi) on a mission to destroy an underground bunker, unaware that he is about to embark in a "War of the Dead." A few years back, the Finns produced a Nazi zombie movie called "Dead Snow" which was a pretty amusing genre entry. So one has to wonder just what cowriter (with Barr B. Potter)/director Marko Mäkilaakso was hoping to accomplish with this Lithuanian shot effort. It has actors more than competent for a low budget genre effort. Hannu-Pekka Vitikainen shot the movie on film, favoring moody, noirish compositions using shafts of light and Dutch angles. They just forgot the basics - an interesting story. There's very little tension, even after accepting Russian solider Kolya (Samuel Vauramo), with his promises of information (a house for shelter, a radio), into the group. The undead soldiers begin to appear and it gradually dawns on everyone that they're up against something unexplainable. The soldiers find a car and get it started and run. It breaks down and they find shelter. Koyla finds his girlfriend (Magdalena Górska), surviving barely in the hot zone, to add some poignance, but there is no back story to flesh anything out. Run, stop, fight, repeat until that bunker is found. It's discovery adds nothing but some Nazi flags. This is a zombie film with little to no gore. It's an in and out mission with no suspense or scares. "War of the Dead" is simply an exercise in filmmaking The Blu-ray is presented in a 1:81:1 aspect ratio. The film is in English, yet the only subtitle option is English (more of a closed caption option). The only extra is the film's trailer.

It had to happen sooner or later. The zombie genre, with the plethora of George Romero movies and the popularity of TV’s “The Walking Dead,” was bound to run into the always-popular war movies and the result is “War of the Dead.” First time feature filmmaker Marko Makilaakso takes these two genre and mashes them together in a stylized romp through the stark Finnish countryside as the platoon, led by Captain Stone (Andrew Tiernan), run into enemy soldiers and a firefight erupts. The Americans are victorious but sustained many losses. But, their plight is not over as they must battle, again, the men they just killed. What they do not know is that the evil Nazi scientists are developing an army of zombie soldiers, apparently to take over the world. The cross-genre story works for about an hour as the plot builds with the mission to destroy a mysterious German bunker, interrupted by the appearance of heavily-armed army of undead. The good guys get decimated and the survivors, including Captain Stone, are joined by a Finnish soldier and a beautiful young peasant woman. The story turns into a survival yarn as the heroes must kill zombies and put a stop to the nefarious experiment. This is where things go down hill as zombies multiply and the filmmakers try to tie the loose ends but do not always succeed, making the film feel hurried getting to its conclusion. It is available on Blu-ray.