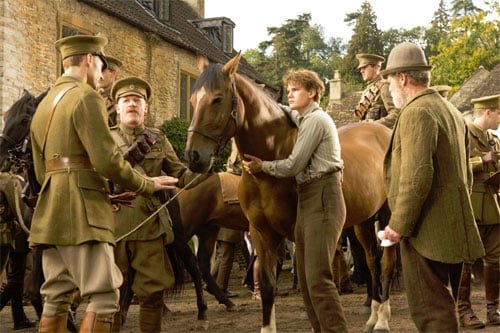 Ted Narracott (Peter Mullen) needs a work horse to plow the fields of his struggling farm. But, at an auction, he sees a truly magnificent equine and, on an impulse, spends his rent money to buy the animal. His wife, Rose (Emily Watson) is distraught over the purchase but son, Albert (Jeremy Irvine), volunteers to train the animal and succeeds where all thought he would fail. But, it is 1914 and war is looming across Europe and Ted is forced to sell his prized beast to the British Army to be a “War Horse.”

With his father about to lose their farm to landlord Lyons (David Thewlis, "Harry Potter's" Remis Lupin) in the days before WWI, Albert Narracott (Jeremy Irvine in his feature film debut) is devastated to learn that the magnificent horse dad bought against all reason which Albert miraculously got to plow their fields is to be sold into military service as a "War Horse." After seeing the stage play in London, director Steven Spielberg knew a classic 'boy and his dog' story when he saw one. "War Horse" does feature some rousing scenes and many that dredge up film classics like "The Quiet Man" and "Gone with the Wind," but it is the antithesis of the one film to which it must be compared, Robert Bresson's "Au Hasard Balthazar." Like the French masterpiece, Spielberg opens his film with the birth of Joey, the horse, being watched in utmost astonishment by a young teen who, having been raised on a farm, one would think would be used to this sort of event. But unlike "Balthazar," Spielberg isn't looking at the depths of the human condition through the eyes of an innocent - he's making a 1940's film from the point of view of all those who come into contact with the noble horse and seek to protect it. In "War Horse," Joey is a symbol of human triumph and sentimentality. Albert's dad Ted (Peter Mullan, "The Red Riding Trilogy") is a proud man but a drunkard. When he beats Lyons for Joey at auction it doesn't take him long to realize his mistake and he threatens to kill the beast in an alcoholic rage. But Albert does the impossible and gets the spirited thoroughbred to accept a yoke and plow their fields. His proud mother Rose (Emily Watson, "Breaking the Waves," "Oranges and Sunshine") awards him with the Boer War sash Ted was awarded for bravery which her husband does not know she has kept. In town, when Albert begs his father not to sell the horse, Captain Nicholls (Tom Hiddleston, "Thor") solemnly promises to do everything possible to return him. Joey continues his impressive streak when Nicholls outraces his superior, Major Jamie Stewart (Benedict Cumberbatch, "The Whistleblower," "Tinker Tailor Soldier Spy"), in a field charge, one which Spielberg parallels in opposing direction on the battlefield against better armed German troops. Joey arrives in their midst without rider and a German soldier steps in to save him by recruiting him to pull an ambulance cart. And so it goes. Joey is paired with another child when he's found by an orphaned French girl, Emilie (newcomer Celine Buckens, awkward in her accented line readings), living with her Grandfather (Niels Arestrup, "A Prophet") before again being taken away by German troops and put to manual labor with a black stallion who Joey attempts to 'save.' In the film's most harrowing scene, the horse runs wild through a blazing battlefield where we've seen his original owner, Albert, in one side's trenches (we do not learn how he came to be there or if he was motivated to enlist to find his horse). Joey becomes enmeshed in barbed wire in No Man's Land and is saved in a joint effort recalling the infamous Christmas Eve tale told in the 2006 film "Joyeaux Noel." As adapted from Michael Morpurgo's novel by Lee Hall ("Billy Elliot," "Toast") and Richard Curtis ("Four Weddings and a Funeral"), Joey has two defining characteristics - the ability to run fast and an aversion to jumping. Big wet brown eyes and a large heart are a given, but the horse itself is only defined by the human action around it and even then, most of the soldiers whom Joey comes across become a rather generic bunch by the film's end. The old Hollywood sheen is immediately apparently in the large, two-story stone farmhouse far too commodious for a farming family on the brink. Cinematographer Janusz Kaminski makes everything look writ large and beautifully lit and Spielberg and his horse trainers have staged some epic battle sequences. John Williams score won't be accused of subtlety. War was hell for these beautiful creatures, but of course we're spared most of that here. Spielberg is making a family film about courage and the bond between man and beast and, for its aims, it works.

Steven Spielberg is having a very Merry Christmas this year with not one but two holiday tent pole films. He delves, for the first time, into 3D animation with “The Adventures of Tintin” and the live action epic, almost-for-the-whole-family (not for the little ones) “War Horse.” I say “almost” in that, while the film is about WWI and the carnage of battle, Spielberg holds back on the blood, so do not expect “Saving Private Ryan” type realism. After all, “War Horse” is about a boy and his horse. Based on the stage play (which was based on the novel by Michael Morgpurgo) that ran to acclaim in London and on Broadway, “War Horse” has the luxury of space and uber-filmmaker Spielberg uses it to create a lush, emotionally moving production. The titular horse, named Joey by Albert, is a truly beautiful creature and garners sympathy as he goes into battle, loses his rider in a torrent of machine gun fire, and, miraculously, survives every challenge he faces. Like a play, “War Horse” is told in episodic fashion as Joey journeys across the battlefields of France serving both sides as he is taken, first, by the Germans, then the Brits, then Germans and, finally… You can guess how a story about a boy and his horse will end. The episodes, though, do not allow the many human characters to flesh out. There are good men, who see how special Joey really is, and there are bad men who care not about the spirit and soul of the equine hero. The middle ground of the film has Albert, now grown up and in the army, searching for his beloved Joey. But, Joey’s adventures and dangers faced and overcome by the war horse are the substance and draw of the film. As one expects from a Steven Spielberg Film, production values are at top form. Lavish sets, including massive battle scenes, are perfectly detailed and executed. As the camera draws away to show the utter scope of the aftermath of battle, I could see the influence of Akira Kurasawa’s “Kagemusha.” Costume, makeup (including Joey’s) and rest of the behind camera work are noteworthy. “War Horse,” for all its epic story telling, backdrop of the Great War and cast of many notable European actors, is a simple tale of love between man and horse. Joey’s adventures are often harrowing and occasionally gut-wrenching and one agonizing scene, involving barbed wire, will have many looking away. But, this is an old-fashioned Steven Spielberg movie that wears it’s happily ever after heart on its sleeve and will please the masses. The sterility of the film – I understand why no blood but, still - kept me at arms length and the only character I really invested in is Joey. High praise is due the equine actor who does not have to deliver a single line to get your sympathy.