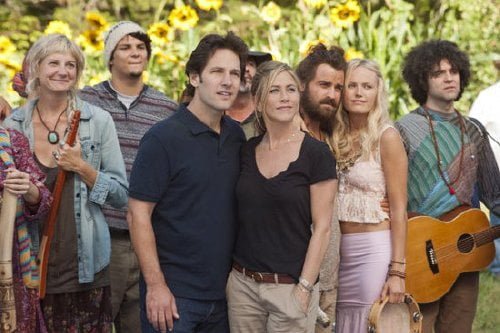 Linda (Jennifer Aniston) and George (Paul Rudd) think they are on the fast track in Manhattan, buying an expensive “micro loft” (read, studio apartment) in the West Village. But he loses his well paying job and prospects of an HBO filmmaking career fall through for her and they are forced to sell the condo and move to Atlanta to live with George’s overbearing, obnoxious brother. Things continue to go bad for the couple until they stumble upon a free-love, old-fashioned hippy-style commune in “Wanderlust.”

After finance exec George (Paul Rudd, "Our Idiot Brother") is convinced by his wife Linda (Rudd's "The Object of My Affection" and 'Friends' costar, Jennifer Aniston) to buy pricey property in the West Village, her latest project falls through and he loses his job. His brother Rick (cowriter Ken Marino, TV's 'Children's Hospital') in Atlanta offers employment, but it comes with heaps of humiliation, so George and Linda return to Elysium, the wacky commune they spent a night at, and give in to their "Wanderlust." Writing with his "Role Models")partner, director David Wain ("Wet Hot American Summer") has elements of a good comedy here. Unfortunately, it flatlines just when it should be picking up with a painfully unfunny and uncharacteristic Rudd scene from which it barely recovers. The film, which has gotten a lot of press because of Aniston's insistence on pulling a topless scene at the 11th hour (it didn't need it), works when it's addressing the pitfalls of the current economic climate, but bellies up when it gets into the relationship stuff. Linda Lavin (TV's 'Alice,' "The Back-up Plan") is hilarious as a realtor with a knack for deadpan spin, selling what George insists is a hugely expensive studio apartment as a 'microloft' in a blossoming neighborhood. Marino and Wain nail the joke with the apartment itself, all tall windows and no square footage, and then they cap it off with the McMansion owned by George's brother whose wife has an addiction to Sky Mall (set decorator Jennifer M. Gentile uses product placement for good). Marino's the epitome of the obnoxious brother and Groundling Michaela Watkins ("The Back-up Plan") makes razor sharp observations about her life with him from within her alcoholic haze. These two and their exasperated son Tanner could rate a spinoff. The introduction to the 'intentional community' Elysium happens en route to Atlanta (after an amusing car interior montage with Rudd and Aniston swapping driving duties and barbs) when the couple are GPS'ed to its B&B and run into its nudist, Wayne (Joe Lo Truglio, "Role Models," "Paul"), on the way in. Wain shoots the scene so that Wayne's nether regions are always the focal point, especially when he squats down to check on the couple who flipped their car in their haste to back up. When they return with an intent to sample the lifestyle, Linda has reservations - they don't get that gorgeous room from before, just a utilitarian one upholding Elysium's 'no doors' policy (bathrooms included) - but as the days go on and resident guru Seth (Aniston squeeze Justin Theroux, "Mullholland Drive," "Your Highness") starts strutting his stuff, she's hooked. A group gathering with a hallucinogenic tea seals the deal. And then the movie falls off a cliff. Eva (Malin Akerman, "Watchmen," "Happythankyoumoreplease") suggests George sleep with her and the couple discover Elysium's into free love. Linda goes off with Seth (off screen), the insists George partake of Eva. Paul Rudd turns red neck giving himself a morale booster in the mirror (in the films closing credit bloopers, Rudd says he's grossing himself out - he should have listened to himself). More silly car stunts ensue and real estate developers move in to threaten the group's existence. Blah, blah, blah with a small uptick for Almond's (Lauren Ambrose, HBO's 'Six Feet Under') wacky childbirth and its aftermath. Frustrating, because "Wanderlust" was really working. Rudd and Aniston work well together and Theroux, with Seth's oily charm and 1980's world view, is a great foil even if some of the other Elysium members fall short. As original founder Carvin, Alan Alda ("The Object of My Affection") is agreeably feeble in mind and body yet cranks about some of the group's more extreme behaviors. Kerri Kenney-Silver ("Role Models") looks the part as den mother Kathy and Jordan Peele (TV's 'Children's Hospital') is OK as Almond's partner. Kathryn Hahn's ("Our Idiot Brother") Karen misses the mark playing outspokenness for laughs. As a goofy comedy "Wanderlust" works more often than not. Marino and Wain have spiked it with clever observations and running gags. If only they had taken it across the finish line.

Pinup beauty and model Barbara Loden was protégé (and wife) to Elia Kazan and a respected stage actress and Tony Award winner. She transitioned into movies and, in 1970, debuted her one and only feature film, “Wanda,” now a part of the UCLA Film Preservation program and its festival at Boston’s MFA. Watching “Wanda” I thought back to such films as “Badlands” and “Sugarland Express.” The on-the-lam story is contemporary (actually a few years before these other films) and is in keeping with the times. Barbra Loden, the film’s writer, director and star, crafts a tale of a woman at ends in the world who teams up with Norman Dennis, even when she learns he is a robber and a thief. She puts up with his verbal, and sometime physical, abuse because she knows of no other life. It is a solid characters study and fine debut, and swan song (Loden died in 1980 after battling cancer), for an unrequited filmmaker.