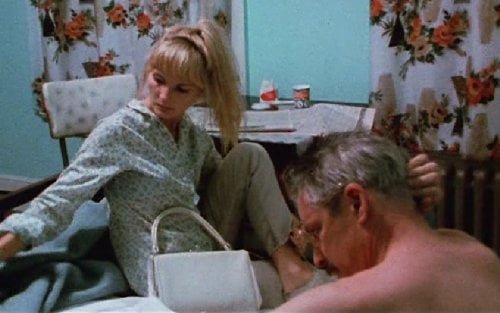 Wanda (Barbara Loden) is a lonely woman search for something to give her life meaning. After abandoning her husband and children, she boozes and wanders from one one-night stand to the next. That is, until she meets Norman Dennis, a small-time crook with big aspirations and an even bigger migraine in “Wanda.”

Wanda Goronski (Barbara Loden, "Splendor in the Grass") is at a low point. Her husband's divorced her and she's voluntarily given up custody of her two kids. Her Brother In Law (Peter Shupenes) doesn't want her bunking on his couch. Her old boss (Milton Gittleman) at a sweat shop won't rehire her because she's too slow and the traveling salesman (Arnold Kanig) who picked her up in a bar can't wait to get rid of her. But the next one she wanders into puts her in the path of Norman Dennis (Michael Higgins, "The Conversation," "State and Main"), an abusive mystery who comes to discover just how much he depends on "Wanda." Writer/director Barbara Loden was a fashion model who became the acting protege and later wife of director Elia Kazan. 1970's "Wanda" was her one and only film and is a landmark of American independent filmmaking. In many ways, it prefigures Sam Peckinpah's 1972 "The Getaway," although in a completely different genre. This is a character study of an aimless woman sunk low who seems only able to show what she's made of with the love of a man. The one she chooses, Michael Higgins's Mr. Dennis, is an odd combination of both Sally Struthers's tormentor/lover Al Lettieri and her doomed husband Jack Dodson. The dynamic between Loden and Higgins is fascinating. Obviously filmed on a very low budget, Loden's film takes place in Pennsylvania's rust belt and the depressed cities and towns of the area. Wanda's whole boozy, random existence is a road trip. When she meets Mr. Dennis, both we and she assume he is the bar's owner (Loden misleads and surprises several times), a man too angry over Wanda's request to use the bathroom when he through his door was already locked. She's just been robbed in a theater and is looking for the next kindness of a stranger. Mr. Dennis yells, but he does give her that beer she asks for and takes her with him. Only we've seen that the real bartender is gagged on the floor behind the bar. Wanda remains innocent for quite some time, only perplexed by Dennis's rough treatment. Loden very gradually turns things around, first glimpsed when Dennis rests his head on Wanda's shoulder as she drives, jerking away when he realizes what he's done. Dennis criticizes her appearance (Wanda is all Pebbles' hairdo and holey black lace underwear) and begins to make her over. A stop at a strange religious site called The Tower of God finds Mr. Dennis visiting his father. Wanda's evolution into accomplice reveals both her basic morality and her needs. If only Loden had kept up her momentum - after Wanda's story arc with Mr. Dennis has come to a close, the character continues on the same path she started on and while that may be psychologically accurate it is nonetheless a cinematic let down. There is a slight indication that Wanda has changed by her reaction to the next man she meets, but not enough to counter the feeling of the film ending by just trailing off. Still, this is a truthful depiction of a woman from a depressed area without the skills to climb out. The film's handheld 16 mm camerawork perfectly complements the gritty story being told, but the sound quality is tinny and uneven, like that of a porn movie made on the fly. Oddly, the poor sound adds the film's authenticity.

Pinup beauty and model Barbara Loden was protégé (and wife) to Elia Kazan and a respected stage actress and Tony Award winner. She transitioned into movies and, in 1970, debuted her one and only feature film, “Wanda,” now a part of the UCLA Film Preservation program and its festival at Boston’s MFA. Watching “Wanda” I thought back to such films as “Badlands” and “Sugarland Express.” The on-the-lam story is contemporary (actually a few years before these other films) and is in keeping with the times. Barbra Loden, the film’s writer, director and star, crafts a tale of a woman at ends in the world who teams up with Norman Dennis, even when she learns he is a robber and a thief. She puts up with his verbal, and sometime physical, abuse because she knows of no other life. It is a solid characters study and fine debut, and swan song (Loden died in 1980 after battling cancer), for an unrequited filmmaker.