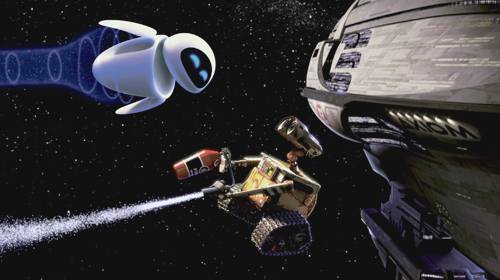 After spending hundreds of years on an uninhabited earth performing the job he was created for - Waste Allocation Load Lifter Earth-Class - a lonely little robot falls head over tracks for EVE (Elissa Knight, "Cars"), an Extra-terrestrial Vegetation Evaluator who believes he holds the key for making earth habitable again for humans. He follows her across galaxies after she goes into autopilot to complete her mission, but computers aboard the Axiom will try to thwart both the ship's naive Captain (Jeff Garlin, "I Want Someone to Eat Cheese With") and the lovesick "WALL*E."

After the relatively disappointing "Cars" and the heading-back-in-the-right-direction "Ratatouille," I was expecting writer/director Andrew Stanton's ("Finding Nemo") "WALL*E" to be back up at Pixar's "Monsters, Inc." pinnacle. Unfortunately, even though Stanton's created a great central character and invested his story with some serious introspection about corporate consumer control and the literal trashing of our planet, the film drags in its midsection when plot overtakes wit and whimsy. WALL*E of the square dumpster body and binocular eyes lives an existance not unlike that of Will Smith in "Legend," alone in a grotty, sun-bleached city with a pet. But much of WALL*E's city is of his own making - skyscrapers of compacted trash outnumber the real ones - and his pet is a cockroach. WALL*E collects items that amuse him - lawn gnomes, plastic utensils - and keeps a backlog of spare parts harvested from the broken down remains of his line. After dark, he retires his warehouse and pops in a videotape of "Hello Dolly!." One day, a huge spaceship lands and deposits a shiny white egg-shaped bot. At first, EVE seems intent on obliterating WALL*E, but eventually he wins her over and shows her his things, including a small green plant that causes her mission objective to override. That plant is proof that life is once again sustainable on earth and will provide automatic instructions to Axiom's Captain on how to return the immense cruise ship to Earth, but Auto, the Axiom's autopilot which was secretly engaged by Buy 'n Large CEO Shelby Forthright (Fred Willard, "For Your Consideration") 700 years earlier, has other ideas. (Buy 'n Large is the corporation whose ads and products devasted the eco-system.) There are problems with a story that introduces its love interest only to shut her down minutes later and which has a specimen of sustainable life discovered inside a refrigerator that has been shut for centuries. What Pixar has done best in the past was create worlds and then devised countless puns and visual jokes that connect these worlds to our own. As long as we have WALL*E's point of view on earth, the film is simply great, but when he moves into outer space and the Axiom, the missed opportunities are immeasurable. We get the point about the grossly obese humans floating about in motorized chairs, but little is done to provide background for these people. It is even suggested that touch between humans is a lost art when John's (John Ratzenberger, "Toy Story") hand touches Mary's (Kathy Najimy, TV's "King of the Hill") and their reaction is one of astonishment. How then, are the babies on board manufactured? M-O, a disinfecting bot, is an adorable foe for the grungy WALL*E, but when WALL*E and EVE are thrown into repair and create a rogue army of broken bots, little is done to play with the concept. The film's conclusion leaves a bunch of ill-equipped humans with a towering problem and too obviously manipulates the audience's heart strings. Lest this sound too negative, I did mostly enjoy "WALL*E." The film, especially in its first act, is impressively grungy looking and WALL*E himself (voiced by sound designer Ben Burtt) is wonderfully expressive without defying his mechanical reality. Pixar's even managed to make a cockroach cute. Vocal work is at a minimum, but casting Sigourney Weaver ("Alien," "Baby Mama") as the Axiom's computer voice brings a smile - Ripley as HAL. Jeff Garlin makes the ship's clueless captain positively endearing as well. Still, if I never hear "It Only Takes a Moment" again, it will be too soon. Pixar has set incredibly high standards for itself and its founders preach importance of story. While "WALL*E" is far more creative and intelligent than most other animated films out there, its story could have used an overhaul - those little tweaks and flourishes consistent throughout their best films are in short supply here.