Walking with the Enemy 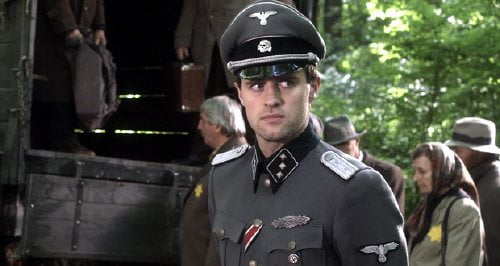 Until 1944, Hitler’s Final Solution for the Jews had not been implemented in their Hungarian ally’s homeland. But, the war is turning against the Nazis and the notorious Adolph Eichmann arrives to begin the deportation of the Jews from Budapest. One young man, Elek Cohen, sees a chance to save some of those destined to die by “Walking with the Enemy”

Films purporting to be 'based on' or 'inspired by' true stories are, of course, going to take dramatic liberties, often because of a need to condense multiple characters into one or to rearrange or punch up events for dramatic reasons. But the license taken by director Mark Schmidt and screenwriter Kenny Golde in repackaging the life story of Pinchas Tibor Rosenbaum, the Hungarian Jew who outsmarted Nazis in his home country to save hundreds of lives by masquerading as a member of the Arrow Cross (the Hungarian Nazi Party), goes so far out on a limb that it snaps. "Schindler's List" this isn't. Instead of telling Rosenbaum's tale, the filmmakers have reinvented him as Elek Cohen (Jonas Armstrong), a Jew who escapes from a Nazi labor camp, returns to his home town and discovers his family is gone and neighbors aren't exactly welcoming. In his and his friend Ferenc's (Mark Wells, "The Chronicles of Narnia: The Lion, the Witch and the Wardrobe") search for Jozsef Greenberg (Simon Kunz, "Trance"), he runs into Hannah (Hannah Tointon, BBCA's 'The Hour'), a pretty woman he had met at a dance and learns she lives in the same, yellow-starred building. Her uncle, Carl Lutz (William Hope, "Dark Shadows"), is protected by the Swiss consul and is running a printing press for faux Swiss passports which many see as there only hope of survival. When Hannah's followed home by two Nazi soldiers whose intentions are very clear, Elek murders them to save her from rape, burying the bodies in the basement. When Ferenc is picked up by the Nazis while distributing forged papers, Elek decides to exhume them, costume himself as an SS officer, and go in to save the lad. This begins a campaign of impersonation, Elek marching into tense situations demanding Jews be handed over into his custody. But "Walking with the Enemy" would have us believe that Elek could bark that paperwork was 'not necessary' when the Nazi obsession with documentation is a well known fact or that he could waltz into an SS officers club and within one minute be regaled with tales of concentration camps far and wide in the presence of champagne drinking women. In a film about the saving of lives, many are treated perfunctorily - before Hannah's attempted rape, her father has been murdered in front of her eyes, but as soon as the threat has been dispatched Elek informs us that everything is now OK, papa's corpse in the next room forgotten. Elek's story is cross cut with the political travails of Hungarian Regent Horthy (Ben Kingsley) and his son Miklos (Shane Taylor), caught between Stalin and Hitler. But a coup ends this strand, which is far more intriguing than Elek's credulity-straining heroics, around the movie's midpoint. The film has the earnest straightforward manner of a 1980's television miniseries, however careful to period detail. Intentions are clearly fine, but execution is naive.

First, let us talk about the statistics of the construction of Christo’s (and, in its origins, Jeanne-Claude’s) remarkable Floating Pier. This “simple” project had a reported cost of $17 million (funded by Christo) and consisted of: 220 six-ton anchors, 226000 interlocking buoyant polyurethane cubes and screws and 700000 square meters of saffron-colored fabric. These and all the other ancillary pieces, like kilometers of heavy chain, were assembled by a team of some 600 workers and volunteers. Director Andrey Paounov and his documentary team take us into the heart of the artistic process as Christo, with the copious help of his nephew Vladimir, design and develop the artist’s vision for his floating Pier. The three kilometer long fabric pier attracted some 1.2 million visitors during its short run, then was disassembled and recycled. Watching the Floating Pier project roll out before us, I was impressed by the focus on both the artistic and practical details that Christo, and Vladimir, faced throughout the creative process. Christo is a great subject for a documentary about art – it is not his first – and our immersion into his process is enlightening and entertaining.