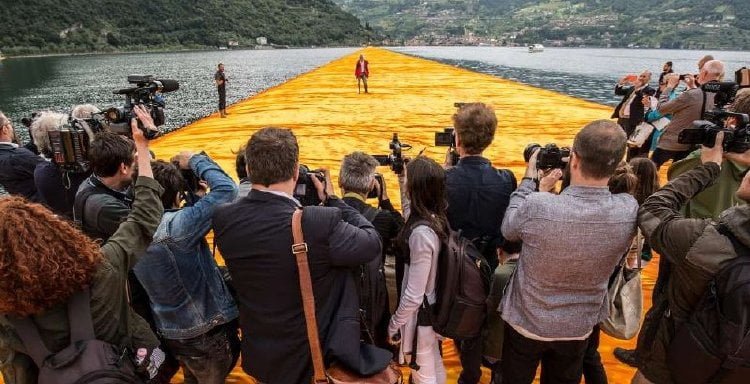 Christo and his late wife and decades-long artistic partner, Jeanne-Claude, created some of the most distinctive large-scale environmental artworks, until her death in 2009. For the first time since her passing, Christo has rekindled his passion with his Floating Pier project on Lake Iseo, Italy, by “Walking on Water.”

Five years after his wife and artistic partner Jeanne-Claude died and over ten years since their last work, 2005’s The Gates in Central Park, large scale installation artist Christo revives their Floating Piers project. Conceived decades earlier, the project had false starts in Argentina and Tokyo until finding a home on Lake Iseo on the Italian Swiss border in 2014. Director Andrey Paounov (“Georgi and the Butterflies”) gives us a fly-on-the-wall perspective on stateside preparations (with a little ‘getting-to-know-Christo’ during an elementary school visit), engineering challenges, Italian bureaucracy, uncooperative weather and crowd control logistics. We soon learn that Christo, his balding pate encircled with a nimbus of white hair, is quite the character. Technologically challenged, he is nonetheless extremely impatient, barking at the participants of a Skype meeting who are trying to answer his question. He argues constantly with his Operations Director Vladimir Yavachev, a man who should be sainted (and who happens to be Christo’s nephew). But he has a vision and his visions coexist with nature, beauty in the open air. It is pouring rain that greets the team trying to install a three kilometer floating pier. Winds kick up as they try to lay down the bright yellow fabric which will contrast with the deep blue water. Italian officials drone on, speaking over one another, as Christo nods off during a meeting, yet these same officials drop the ball rather spectacularly when the Floating Piers open to the public, allowing four times the anticipated crowds entry. On the first day, a distraught mother reports her young daughter missing. Vladimir is everywhere, conversing over walkie-talkie. He and Christo get a response when they threaten to close down the installation. “Walking on Water” is fascinating and often funny. Paounov was given 700 hours of footage to work from and has stitched together quite the tale. Yet the film, which features no narration or interview footage of any kind, could have used a little more context. (For example, we hear Christo mention anchors in passing and see a couple of seconds of a scuba diver holding onto the pier - sounds like a whole other level of complication that's merely hinted at. We also see a scene where a man haggles over the price of a Christo original artwork depicting his Piers, but are never given an overview of this side project nor how it relates financially to the mounting of the larger one.) By the end of the exhibition, which was only open from June 18 through July 3 of 2016, we vicariously feel Christo’s joy as he surveys his work from a helicopter. Seven months later, Christo is in the Sahara. What is next? Grade:

First, let us talk about the statistics of the construction of Christo’s (and, in its origins, Jeanne-Claude’s) remarkable Floating Pier. This “simple” project had a reported cost of $17 million (funded by Christo) and consisted of: 220 six-ton anchors, 226000 interlocking buoyant polyurethane cubes and screws and 700000 square meters of saffron-colored fabric. These and all the other ancillary pieces, like kilometers of heavy chain, were assembled by a team of some 600 workers and volunteers. Director Andrey Paounov and his documentary team take us into the heart of the artistic process as Christo, with the copious help of his nephew Vladimir, design and develop the artist’s vision for his floating Pier. The three kilometer long fabric pier attracted some 1.2 million visitors during its short run, then was disassembled and recycled. Watching the Floating Pier project roll out before us, I was impressed by the focus on both the artistic and practical details that Christo, and Vladimir, faced throughout the creative process. Christo is a great subject for a documentary about art – it is not his first – and our immersion into his process is enlightening and entertaining.