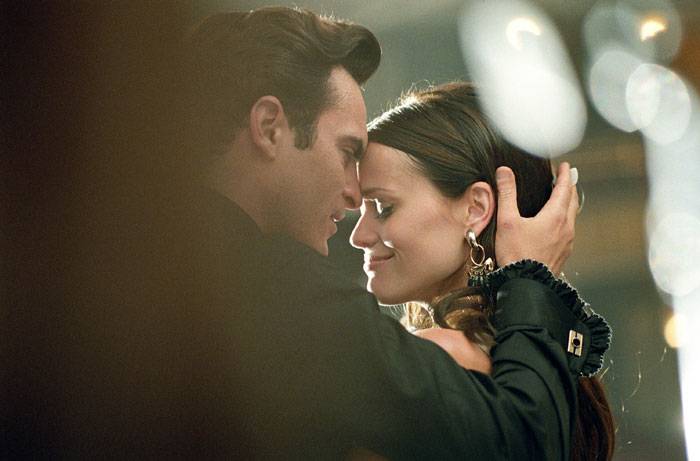 In 2003, music icons Johnny Cash and his wife, June Carter Cash, died within months of each other. Their marriage and devotion were legendary but the story of this legend remained steeped in the misty haze of the past. The story of the rocky path that finally led to this wedded bliss is brought to the screen by director/co-writer James Mangold in “Walk the Line.”

J.R. (Ridge Canipe) was the son of a sharecropper, Ray Cash (Robert Patrick), eking out a backbreaking living growing and picking cotton in the post-Depression Arkansas. Young J.R. loves music and, even more, adores his older brother Jack (Lucas Till). Jack is his father’s favorite and seen as a lad that will make something of himself, unlike J.R. whose head is in the clouds. But, tragedy strikes when Jack is mortally injured in a sawmill accident and the only thing Ray has to say to his younger son is an accusatory, “Where were you?” Jump ahead ten years and grown up J.R. (Joachim Phoenix) is about to join the army during the Korean War. Ray, still blaming his son for not being the one to die instead of Jack, is barely civil as the young man leaves for assignment in Germany. There, John fights the boredom of Army life when he buys a used guitar, learns to play it and gives his first, tentative try at writing a song. Marriage, though, comes before music and Johnny proposes to his sweetheart, Vivian (Ginnifer Goodwin), and settles down in Memphis to work as a door-to-door salesman. The music bug is never far beneath the surface for John and he forms a band, Johnny Cash and the Tennessee Two. They go to the local recording studio run by Sam Phillips (Dallas Roberts) and audition with one of the gospel songs popular on the radio. Sam doesn’t want more of the same, though, and is about to send John and his friends packing. Cash decides to play the song he wrote when overseas, Folsom Prison Blues. Sam is blown away by the tough, gritty song about desperate men and inherent violence, records it and a star is born. John begins his fast paced career on tour with other up-and-comers like Jerry Lee Lewis (Waylon Payne), Carl Perkins (Johnny Holliday), Roy Orbison (Jonathan Rice), Waylon Jennings (Waylon’s son, Shooter Jennings) and the King himself, Elvis (Tyler Hilton). It’s the beginning of sex, drugs and rock ‘n’ roll and Johnny gives into it with gusto. He meets June Carter (Reese Witherspoon), the only woman on the tour, and is taken by her talent and keen sense of humor. He falls for the pretty singer but they are both married and nothing, except for platonic friendship, can come from it. Johnny’s career takes off and his star rapidly rises, garnering the singer a million dollar music deal and renown when he announces, “Hello, I’m Johnny Cash,” to tumultuous applause. But, the drugs stop being fun and Cash becomes addicted. His meteoric rise becomes an equally rapid fall but his friend, June, sticks by him. “Walk the Line” is as much about John and June as it is about the man and his music, culminating with his triumphant Folsom Prison concert and, finally, in 1972, his marriage to June. As I watched “Walk the Line” I could not help but think about the far superior “Coal Miner’s Daughter” (1980). Where that film immersed you into the world of Loretta Lynn and earned it’s star, Sissy Spacek, a well-deserved Oscar, the Johnny Cash biography never rises above routine. I have always liked Joachim Phoenix as an actor but I never felt that I was watching anything but an actor pretending to be Cash. Sure, Phoenix gets Johnny’s on stage moves and peculiar guitar style right but when he’s not performing I never felt like I was watching Johnny Cash. This might be because the actor lacks Cash’s hulking build, craggy and weatherworn features and gravelly voice. Jamie Foxx did a far better job making his “Ray” look and feel like Ray Charles. The eminently likable Reese Witherspoon does her best but, as with Phoenix, I never thought of her as June Carter. The players that personify the other talents of the time, like Elvis, are just namedropped to show the who’s who of the burgeoning music world of the time. Robert Patrick gives a one-note perf that doesn’t change one iota from start to finish, always critical of his famous son. The script, by Mangold and Gill Dennis, is base on the Cash biographies The Man in Black and Cash: An Autobiography, but never breathes life into the story of the rise and fall and rise of the man. It is more a series of episodes strung together, interspersed with stage performances of Cash in concert. Impressively, both Phoenix and Witherspoon did their own singing and, through the magic of electronics, do sound like the artists themselves. Both actors – Phoenix on guitar and Witherspoon on the auto harp – learned to play their instruments for the roles. It’s too bad that their efforts were wasted on a mundane biopic. Production techs are very well done with good attention paid to period costume and set. The musical performances are uniformly well handled and seem faithful to their sources. Walk the line” is anticipated to be a big contender for acting and film awards but I don’t see that happening.