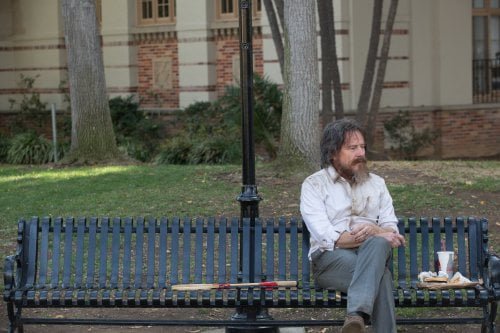 Howard Wakefield (Bryan Cranston) has the perfect life as a a prestigious Manhattan attorney with a loving wife (Jennifer Garner) and two beautiful daughters. But, there are cracks beneath the surface and he makes the spur-of-the-moment decision to go into hiding in his garage attic, exiling himself from family and friends in “Wakefield.”

When Howard's commuter train stops due to a widespread power outage, he walks home, considering that people move to the suburbs to be near nature. 'We don't live in nature, we live apart from other humans protected from what is wild.' he thinks, before encountering a raccoon in his driveway. When the creature runs into his garage's garret, Howard follows, making it his home for an entire year while his wife Diana (Jennifer Garner), friends and colleagues wonder what happened to "Wakefield." Writer/director Robin Swicord's ("The Jane Austen Book Club") faithful adaptation of E.L. Doctorow's short story may have a large cast, but it is a one man show. With little audible dialogue other than what is running through Wakefield's mind, Bryan Cranston goes on an epic journey leaving not his family but himself. The film has a "Rear Window" quality as Wakefield observes his family from the bull’s-eye window in his dusty, jumbled garret, but Wakefield spends a lot more time reflecting on his past. We learn about the argument he had with Diana that morning after he accused her of having flirted with another man at a party, a 'game' he believes they've played as a prelude to passion. His adolescent twin daughters regard him as an embarrassing interloper. Scavenging in his own and neighbors' garbage for food, Wakefield's hair grows long, his clothes shabby (he makes one early foray into his own house for a shower and supplies). He observes his next door neighbor, Dr. Sondervan, an expert on Down Syndrome and other genetic afflictions who boards his patients, a neighborhood controversy Wakefield was proud to have rebutted. One day, one of those children, the always smiling Emily (Pippa Bennett-Warner), spies him in the window and she and Herbert (Isaac Leyva, "Any Day Now"), a Down Syndrome child, become his only human contact, visiting with offerings of food. But it is Wakefield's relationship to his wife which drives this story. He remembers their courtship, driven by the intense competitiveness between himself and his best friend Dirk Morrison (Jason O'Mara, TV's 'Agents of S.H.I.E.L.D.'). Wakefield lied to date his best friend's girl, creating a drawn out love triangle he eventually won, only to realize a year into his marriage that he acted from questionable impulses. Diana's penchant for nudity in the home upset his prudish sensibilities - or was it jealousy again? In a rare opportunity to be heard in a flashback, Diana eventually tells him 'I just want to get through each day,' a chilling condemnation of their life together. Wakefield eventually begins to journey into town, its inhabitants regarding him as a homeless man. When an old world knife sharpener stops for his biannual servicing of the Wakefields' cutlery, Wakefield takes a chance, walking out into his driveway just as Diana comes out the backdoor. Her glance holds no recognition. Wakefield has an epiphany. Then, just before Christmas, his old buddy Dirk pays a visit to his family. Cranston, who narrates Wakefield's thoughts throughout, roots himself in this absurdly compelling character, the rest of the cast acting out his observances. Garner finds expressive moments in Doctorow's text, a dusk appreciation of blooms on a backyard tree moving and lovely. Swicord notes the passing seasons in the surface of the Wakefields' birdbath. Her film is an interesting experiment, but it suffers from the inherent distancing of Wakefield's life going on without him. Grade:

Second-time feature director Robin Swicord takes on E.L. Doctorow’s short story, of the same name, about a man who has it all and just gives up. Bryan Cranston gives a one-men-show performance as Howard descends into madness and self-reflection. When the commuter train he rides on daily breaks down before his stop, Howard and the rest must debark and walk to the station. He is so late that his wife, Diana (Jennifer Garner), is not there to pick him up and he walks the rest of the way home. A foraging raccoon is there to greet him and, when Howard tries to chase it away, it runs into the garage attic. Howard shoos it out and, looking out the window, sees his family having dinner. Diana, he notices, is worried. He makes himself comfortable and watches his wife and daughters into the night. The next thing he knows, he wakes up and it is morning. But, he does not reveal himself or his hiding place to his family. This begins a personal odyssey for Howard as he discovers that he is a man who is no longer who he was. Bryan Cranston narrates the film from Howard’s own mind as he observes, from his hidden perch, his family and thinks about his life and what he has become. It is a very measured and riveting performance by the film’s star. The bulk of the film takes place in Howard’s self-imposed prison and the attic takes on its own personality as he makes the place his home, but not without suffering and privations. At nearly two-hours, one would think the filmmakers would run out of gas in telling Howard’s story. But, the source material by E.L. Doctorow, writer-director Robin Swicord’s deft adaptation of the short story and her intimate direction of Cranston make you not to even notice the time. The average movie-goer may not see the appeal for seeing ”Wakefield.” The film buffs, though, will not be disappointed.