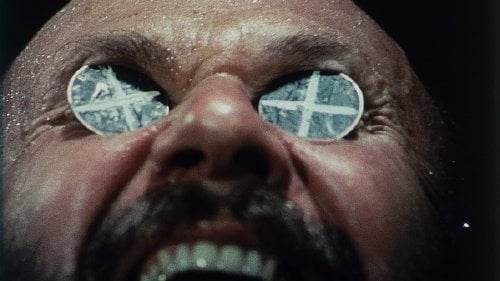 John Grant (Gary Bond, "Zulu") is a bonded teacher at a one room schoolhouse in Tiboonda, a desolate outpost in the Australian Outback. He can't wait to get back to Sydney for his 6 week Christmas holiday. But, when spending one overnight in the mining town of Bundanyabba, he sees the local gambling scene as his ticket back to civilization. It proves anything but in "Wake in Fright."

Second-time feature director Robin Swicord takes on E.L. Doctorow’s short story, of the same name, about a man who has it all and just gives up. Bryan Cranston gives a one-men-show performance as Howard descends into madness and self-reflection. When the commuter train he rides on daily breaks down before his stop, Howard and the rest must debark and walk to the station. He is so late that his wife, Diana (Jennifer Garner), is not there to pick him up and he walks the rest of the way home. A foraging raccoon is there to greet him and, when Howard tries to chase it away, it runs into the garage attic. Howard shoos it out and, looking out the window, sees his family having dinner. Diana, he notices, is worried. He makes himself comfortable and watches his wife and daughters into the night. The next thing he knows, he wakes up and it is morning. But, he does not reveal himself or his hiding place to his family. This begins a personal odyssey for Howard as he discovers that he is a man who is no longer who he was. Bryan Cranston narrates the film from Howard’s own mind as he observes, from his hidden perch, his family and thinks about his life and what he has become. It is a very measured and riveting performance by the film’s star. The bulk of the film takes place in Howard’s self-imposed prison and the attic takes on its own personality as he makes the place his home, but not without suffering and privations. At nearly two-hours, one would think the filmmakers would run out of gas in telling Howard’s story. But, the source material by E.L. Doctorow, writer-director Robin Swicord’s deft adaptation of the short story and her intimate direction of Cranston make you not to even notice the time. The average movie-goer may not see the appeal for seeing ”Wakefield.” The film buffs, though, will not be disappointed.