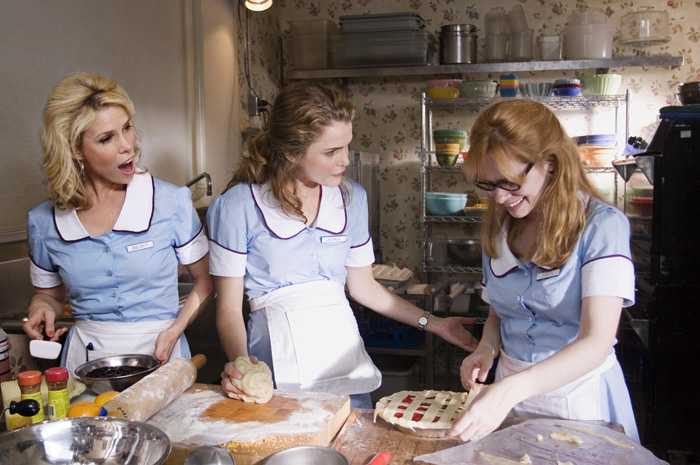 Jenna (Keri Russell, "Mission: Impossible III," TV's 'Felicity') loves her job creating pies for Joe's Pie Diner but she's trapped in a horrible marriage to the jealous, controlling and infantile Earl (Jeremy Sisto, "Wrong Turn," HBO's 'Six Feet Under'). When she discovers she is pregnant, she is less than overjoyed yet she blossoms in a romantic connection with the new obstetrician in town, Dr. Pomatter (Nathan Fillion, "Serenity") in writer/director Adrienne Shelly's ("I'll Take You There") "Waitress."

It is a bittersweet experience watching the uniquely adorable "Waitress" because indie actress Adrienne Shelly, murdered in New York City this past November, has come into her own as a filmmaker with this, her third film. I wasn't a fan of her last effort, but this film shows off a unique voice and feminine perspective. After two stripes appear on Jenna's testing stick, she marches into the kitchen to make 'I don't want Earl's baby' pie, the day's special. Jenna pinpoints the conception to 'the night Earl got me drunk' and doesn't tell her husband the news. Instead she continues to hide money around the house and dream of running away to Tennessee to participate in a bakeoff contest. Jenna is initially unsettled when she discovers her long time female doctor has retired and her first formal ob/gyn appointment is with the new, handsome, but nervous doctor. It's clear from the get-go that Jenna has a strong effect on Pomatter, who is also married. Jenna's awakening emotions are detected by her insecure husband, more intent than ever in keeping her under his thumb, and by diner owner Old Joe (Andy Griffith, "A Face in the Crowd," TV's 'Matlock'), seen as an old curmudgeon to all but Jenna who confides her dreams and receives sage advice in return. Her girlfriends and coworkers Becky (Cheryl Hines, HBO's "Curb Your Enthusiasm") and Dawn (Adrienne Shelly, "The Unbelievable Truth," "Factotum") attempt to ease Jenna into more favorable feelings about motherhood by gifting her with a baby book and Jenna begins to write letters to the child she considers a parasitic alien. Visually, Shelly's film is merely serviceable. She conveys the evolution of Jenna's happiness via camera work that begins with dull, unmoving shots and gradually shifts into pans and the reliable 360 degree whirl of a first kiss, but her first act looks like the work of an amateur rather than by design. She more than compensates, though, with a wonderful script full of witty dialogue and quirky character observations that, despite all that is going on, never seems overstuffed. As if Jenna's central conflict were not enough for a film, Shelly shows other forms of love via Becky and her own character of Dawn, the former, who is married to an invalid, in a surprising affair of her own and the latter falling in love with a prospect initially branded a creepy stalker. The bizarre lineup of pies, some tried and true recipes, others more weirdly concocted, never quite turn this into a foodie film like "Water for Chocolate," but they are amusing expressions of Jenna's roiling emotions. The cast is uniformly terrific beginning with Russell's assured first theatrical lead. The actress's alert, heart-shaped face expresses an intelligence unlikely to be swayed by rash emotional reactions even as she jumps headlong into an extramarital affair throughout her pregnancy. Fillion is sweet in his befuddled attempts at woo and grows sexier with confidence as the romance deepens. Perhaps even better, if more thoroughly unlikable, is Sisto as the child-man who cannot distinguish between love and neediness. Hines and Shelly are distinctly different, one sassy the other shy and unaware of her own charms. Eddie Jemison ("Ocean's Twelve") is uniquely Ogie, Dawn's 'spontaneously poetic' suitor and Lew Temple ("The Devil's Rejects") is a consistently gruff supervisor until given his philosophical moment. Shelly's most ingenious bit of casting, though, is Griffith, whose Old Joe is a complex mixture of vinegar, sugar and salt. "Waitress"'s comedic climax forfeits romance for feminine independence and love of a different kind, a move that somewhat deflates a film that's been wafting on puffs of pie baking and sexual pheromones. The way to a man's heart might be through his stomach but the art of cooking firstly reveals a nurturing nature.