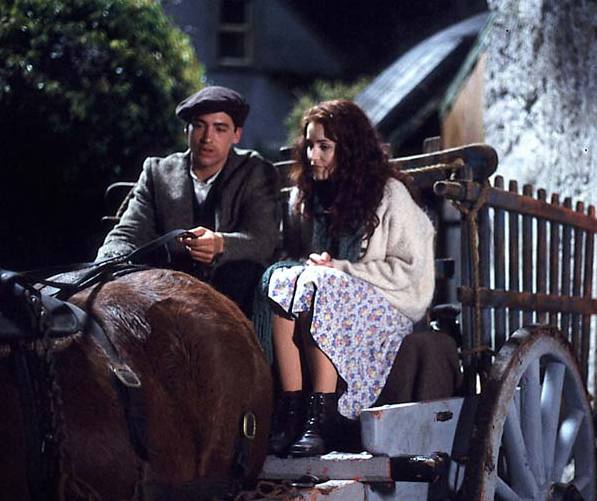 Fighter jock Mike Clarke (Andrew Keegan) makes an innocent wager that he will get five kills before the end of WWII. However, the bet, with the notorious Al Capone’s nephew, is anything but innocent. As the war draws near its end and with only four victories under his belt, he and his co-pilot “Twickers” Twickenham (Hugh O’Conor) are forced to emergency land in Ireland. With a $10000 ante at stake, now-interred pilot Mike has to figure out how to get his last kill, and win the bet, before the war is over in “Waiting for Dublin.”

There are great whimsical movies, like “Local Hero” and “I Know Where I’m Going” about a visit to a strange and wonderful land full of lovable, eccentric people that will change the protagonist in profound ways. Then there is the forced whimsy of films like “Waking Ned Divine” and, now, “Waiting for Dublin.” In both of the latter movies are quirky characters performing quirky deeds (like a grizzled old, blind WWI vet (Don Foley) who is enlisted to pilot Mike’s plane as he attempt to shoot down another interred flyer, Otto “Dinky” Dinkelgruber (Jenne Declair), the pilot of a German Messerschmitt fighter who deserted the Luftwaffe. This gag, and others, were telegraphed early on, losing any surprise.). One of the several problems with “Waiting…” is that far too much time is spent on the two-dimensional romance between Mike and lovely Irish colleen, Maggie (Jade Yourell). He is the hotshot, cocky American fighter pilot whose good looks make him expect that ladies will swoon over him. She is a staunch Catholic girl who would not think of allowing Mike liberties without being married. Romantic sparks should fly but don’t in a storyline that occupies fully half of the film’s runtime (not good when it is only about 80 minutes and is really about Mike trying to win his stupid bet). Longtime TV director Roger Tucker makes the leap to the big screen but the jump falls short of successful. Utilizing a script by Chuck Conaway, Tucker and company try to reinvent the whimsical, stranger-in-a-strange-land film where the stranger lands in a near fantasy world far from home. “Waiting for Dublin” (the title refers to the pending visit by a Dublin constable who will sort out the whole matter of Mike and Twickers getting back into the war) uses the lame premise of Mike getting his coveted fifth kill. With little fuel and no bullets, he is forced to resort to a vintage rifle, his service pistol and, even, an ancient crossbow to achieve his shoot down of Dinky’s plane. It is a potentially funny idea but too short to sustain an entire film (hence the lame romance) and not at all clever with its predictability. I envied the time the characters spent hoisting pints in the local pub. Star Andrew Keegan (I can only remember him as the narcissist pretty boy in “10 Things I Hate About You”) gives a flat, two-dimensional performance as Mike Clark, a role that could have been better handled by any number of actors. Hugh O’Conor, as Brit co-pilot Twickers is wasted. The character could have been effective comic relief but disappears early in the film and only re-emerges near the end. Others are only given the opportunity to wear their obligatory “quirky” hats, just so we don’t miss the jokes. Techs are surprisingly well done for a relatively small budget film. With no vintage Messerschmitt ME-109’s in existence outside a museum, the production team makes clever use of a WWII P-40 Warhawk fighter plane as a stand in. Costume and locale measure up, too. A better script, stronger direction and a likable star could have made “Waiting for Dublin” worthy of the best whimsy.