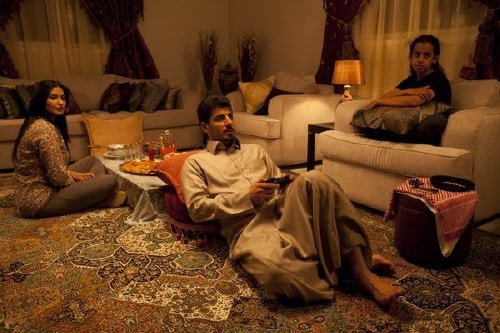 On the outskirts of Riyadh, a 10 year-old girl is teased by neighbor boy Abdullah (Abdullrahman Al Gohani) from his bike on their way to school. She's castigated by her principal Ms. Hussa (Ahd) for the missing head scarf he whipped away. Afterwards, he presents her with a brand new one, but she says they will not be even until she beats him in a bicycle race, having not been able to catch him on foot. But in Saudi Arabia, the conservative view is that bike riding will compromise a young girl's virtue. When she sees a new flowery green bike at her local shop, though, nothing will stop "Wadjda." Writer/director Haifaa Al-Mansour is not only the first female Saudi Arabian filmmaker, she's made the first film completely shot in her home country and the fact that it is critical of Islamic views towards women makes it all the more remarkable. Working with a largely nonprofessional cast, Al-Mansour has achieved deeply felt and naturalistic performances from Waad Mohammed as her little rebel and Reem Abdullah as the mother fighting to remain her husband's (Sultan Al Assaf) only bride. Al-Mansour begins with the rather standard opening of focusing on feet. We see black strapped shoes topped with lacy white socks and hear children's voices singing a religious song. But when the front row's pair of feet step forward, we meet our heroine via the black Chucky Taylors beneath her gray school robe. At home, Wadjda wears an 'I'm a GREAT catch' tee shirt, listens to underground English rock radio and disses out her mother's driver (Saudi women not being allowed to travel without a male relative or servant nor allowed to drive). When her mother refuses to consider buying Wadjda the bicycle she so covets, Wadjda begins to save up the 800 riyals herself by selling (banned) football bracelets at school and, naively and more dangerously, by agreeing to carry an 'Exit permission' for Abeer to her 'brother' waiting outside. But her biggest break comes when a Quran competition with prize money is announced at school. Wadjda surprises Ms. Hussa by proclaiming a new leaf with her desire to enter the special religious studies class. Mom has the money for that bike, but she has it pegged for another purchase - a dress to ward off other females at her husband's brother's upcoming wedding (the va-va-voom red gown she has her eye on at a Riyadh mall looks like it's been retrofitted with a modesty insert). Unable to bear children after Wadjda, her mother-in-law has been pressuring her son to take another wife and his visits to their home are becoming more and more infrequent, even though he calls his wife beautiful and the 'original brand.' He's particularly gracious when she cooks up a feast for he and his men friends, but the all male family tree they leave behind sends a note of doom she fails to receive. The filmmakers present Riyadh and its environs as a sun bleached, parched land dotted with square buildings, all walled and locked to keep their women from view. In sharp contrast is the modern, glass luxury shopping mall and the hospital where Wadjda's mom's friend Leila (Sara Aljaber) scandalizes her by working with men. Al-Mansour adds a note of equal opportunity oppression when two of Wadjda's female classmates are accused of inappropriate physicality. Abdullah seeks Wadjda's rooftop to string lights for his uncle's political campaign, but these, too, signify a different kind of lighted celebration, and not for the uncle we've been told of. If dad is distractedly proud of his daughter's accomplishments in school, mom acknowledges Wadjda's most outrageous act of defiance there, cementing their loving, girlish relationship. The voluptuous, stunning Abdullah convincingly turns heartbreak into a feminist bid for the next generation. Mohammed is a sly fox, a comic con artist with a generous heart. "Wadjda" makes a strong statement about Saudi women's cultural inequality, but is interesting in that it is mostly women who uphold the status quo here (the Quran teacher admires a ten year-old's wedding photos before reminding her that pictures are forbidden in school). There is hope for the future in that new bike's shopkeeper (Ibrahim Almozael), who is amused rather than shocked by Wadjda's goal, and in the young boy who teaches her to ride a bicycle while she dreams of her own.