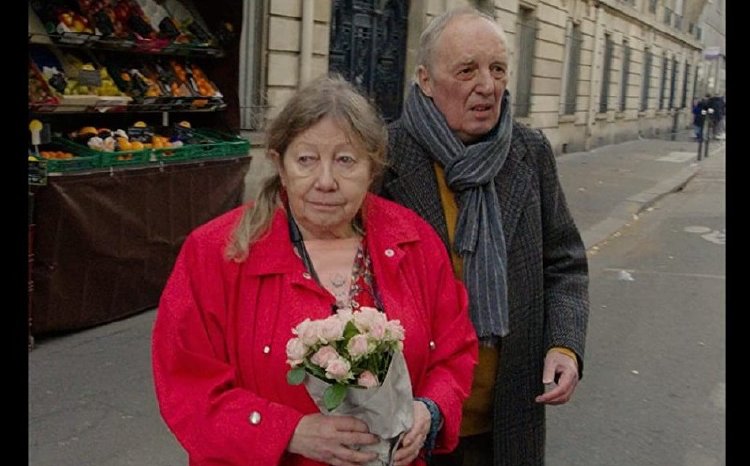 In a Parisian rooftop apartment, an old man (Italian giallo director Dario Argento) and woman (Françoise Lebrun, "The Mother and the Whore") greet each other from opposing windows overlooking a courtyard.  She announces a meal is ready and he ambles around a corner in their maze-like apartment to join her for bread and a glass of wine.  ‘To us!’ they toast, but this turns out to be a last hurrah as the old man’s health is failing after a stroke and she is being consumed by Alzheimer’s.  They are spiraling into a “Vortex.”

Almost ten years after another cinematic provocateur, Michael Haneke, made a film about an elderly couple with a single child facing mortality (“Amour”), along comes writer/director Gaspar Noé ("Enter the Void," "Climax") with his take and it is far and away the superior film.  Messy where Haneke’s was studied, everything about the largely improvised “Vortex” rings true.  Noé’s decision to quickly divide his frame into a split screen throughout the film’s running time may sound like a distracting gimmick, but in actuality it was a master stroke, illustrating two people being alone together.

After featuring Françoise Hardy singing 'Mon Amie La Rose,’ a French classic about how everything that is young and beautiful will eventually die, we cut to an overhead shot of the elderly couple asleep in bed.  Cinematographer Benoît Debie ("Enter the Void," "Climax") introduces more color with light (amusingly he is in blue, she in pink) and the screen splits in two as she rises, heads to the bathroom, then shuffles down one of the apartment’s long, narrow hallways to a kitchen where we become alarmed, viewing her from behind as the light intensity increases in front of her.  As she turns to walk away, our fears are confirmed – there is an open flame left on the stove, the first sign that all is not well.  She will gather up garbage and take it downstairs, then venture into a few stores before her husband rises in the other frame, eventually realizing she is not there.  Fortunately they are known in this neighborhood and he finds her in a grocer’s, buying her the roses she’s begun to fondle (what she eventually does with them broke my heart).

Things grow ever more complex as we view the old film critic working on a book about cinema and dreams while his wife wanders their cramped, cluttered environs looking utterly lost.   Their son Stéphane (Alex Lutz) arrives and is shocked to discover how quickly his mother, a former doctor who still believes she can prescribe medication, has gone downhill, but dad insists he has a handle on things, even as all he seems to do is make lists.  Grandson Kiki’s (Kylian Dheret) noisy play has an upsetting effect (and when Noé briefly exchanges the old man’s outside excursion with his son’s separate life on the ‘male’ side of the screen, the situation becomes even more pitiable, Kiki’s agitation given root).  As the old man resists moving and leaving a life’s worth of possessions, primarily books, her attempts to ‘tidy up’ will have devastating effects.  Yet even when he declares their existence a ‘nightmare’ and we learn of his long term affair, the love between this couple is undeniable, the film’s climax featuring one extraordinarily moving last hurrah of support.

Argento and Lebrun are utterly truthful in their depictions (even in sleep, Argento is so convincing one wonders if Noé simply caught him napping in a chair).  Lebrun’s depiction of the degenerative disease is painful to watch as she struggles to find language, simply blanks out, or allows her character’s old self to glimmer through the haze.  The production design, with a lifetime of material accumulating as if in archeological layers within a uniquely cramped space, reminds one of Azazel Jacobs’s use of his actual parents’ (dad is filmmaker Ken Jacobs) NYC loft in “Momma’s Man.”  And then, one day, it’s simply all erased, Noé’s final comment on the brevity of life.

She (Francoise Lebrun) wanders around the cluttered apartment aimlessly, takes out the trash and, then, goes to a store where she also wanders aimlessly. He (Dario Argento) sits in his office, types and makes phone calls when he realizes she is not there and rushes to find her. It is a clear case of her suffering from dementia and he dealing with her “disease without a cure,” or is it? The question is answered in unexpected ways in “Vortex.”

Director and writer Gaspar Noe challenges our minds with his poignant and moving study of old age and the trials of aging. At first, things seem cut and dried as she appears to be in the throes of dementia and he operates “normally,” doing his day to day tasks. And this appears to be the case here.

But, Noe tells us “not so fast” as the story plays out and their son, Stephane (Alex Lutz), tries to help his mom and dad through their increasingly tough times getting old. But, Stephane, with a failed marriage, a young son, Kiki (Kyian Dheret), a nowhere job and a drug problem is helpless in trying to care for his parents.

Desperate to help them, Stephane proposes the only solution he can think of – move his mom and dad to assisted living. This is where the tone of the story changes and things may or may not be as the appeared earlier. I think I will leave it at that. I have some of my own ideas about the couple and what is really happening and I would love to discuss it – after you see the film.
This tiny little movie, probably made on the budget of what may not pay the catering bill for a Marvel movie, is its own marvel of fine acting, expert writing and direction and a realistic production and set. “Vortex” is an elegant piece of filmmaking on a difficult subject – old age.

Utopia Films released "Vortex" in select theaters on 4/29/22.  It is currently available digitally.