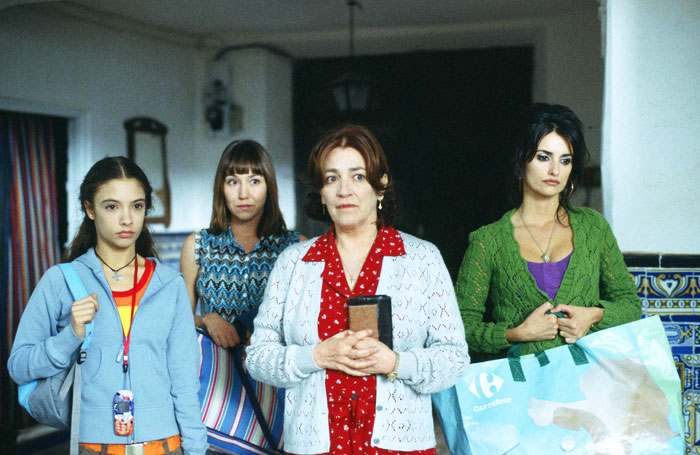 Raimunda (Penelope Cruz) came from a tiny village in La Mancha, Spain and, now, lives a mundane existence in Madrid with her pubescent daughter, Paula (Yohana Cobo), and layabout husband, Carlo (Antonio de la Torre), working as a cleaning lady to pay the bills. Her life is about to change when Carlo sexually assaults Paula and the girl stabs him to death. Raimunda’s maternal instincts kick in and she acts to protect her daughter, hiding the body in the deep freezer at her friend’s failing restaurant. Her decision becomes the catalyst for changes to the three generations of her femme family in “Volver.”

Raimunda (Penélope Cruz, "Gothika," "Sahara") is a hard-working woman with a teenaged daughter and layabout husband. She returns to her home town in La Mancha with her single sister Sole (Lola Dueñas, "Talk to Her," "The Sea Inside") to tend to the graves of her parents, who died in a fire years ago, and visit Tía Paula (Chus Lampreave, "Talk to Her"). Family friend and neighbor Agustina (Blanca Portillo) keeps an eye on the old woman and knows what Sole soon discovers - that Raimunda and Sole's mother, Irene (Carmen Maura, "Women on the Verge of a Nervous Breakdown," "Free Zone"), has been "Coming Back (Volver)." Writer/director Pedro Almodóvar ("Women on the Verge of a Nervous Breakdown," "Talk to Her") reunites with his "Women on the Verge" star, Carmen Maura, and gives Penelope Cruz a showcase in which to strut her stuff in his best female-centric film in years. After the amazing "Talk to Her," "Volver" may be Almodóvar-lite, even dealing with death as it does, yet it's delightfully nutty, like a comedic "Mildred Pierce" directed by Alfred Hitchcock. Raimunda is astonished to discover her daughter, Paula (Yohana Cobo, "The 7th Day"), waiting for her at the bus stop, but turns immediately supportive and business-like when she finds out why - her husband, Paco (Antonio de la Torre, "The 7th Day"), had designs on her daughter who killed him in defense, leaving a bloody mess in mom's kitchen. When neighbor Emilio (Carlos Blanco) stops by that same evening to ask Raimunda to show his restaurant to an interested seller in his absence, he notices the blood smeared across her neck and asks if she is hurt. 'No, it's just woman troubles' answers Raimunda. Indeed. When Aunt Paula passes, Sole is shocked when Raimunda says she cannot possibly attend the funeral, so Sole ventures back to La Mancha, where the winds are known to drive people mad, alone and has her own encounter with mama. She brings Irene back with her, explaining her presence as a hired Russian woman in her hairdressing business, but while Paula knows her grandmother is stashed at Soles, they hide her presence from Raimunda. 'It really hurts when a daughter doesn't love her mother' Irene explains to Paula. Meanwhile, Raimunda impulsively takes over Emilio's restaurant and begins cooking for a local film crew whose director has a taste for more than her cooking, but when she returns to La Mancha to rid herself of her husband's body (she buries him at the spot where they first met), Agustina, who is battling cancer, begins to press her for information about her mother's disappearance. Raimunda claims ignorance, but Agustina's perseverance will unravel an old mystery with parallels to Raimunda's life. Almodóvar, who tricked his star out with a prosthetic rear to give her the right look, is clearly reveling in his female cast - his affection is writ all over the screen and his camera (cinematography by José Luis Alcaine, "Bad Education") cheekily accentuates their curves. Yet he's allowed "Volver" to sprawl a bit too much, with subplots (Agustina's trash TV sister is a totally unnecessary character) that add little and others that go nowhere (the obvious attraction between Raimunda and the film director is simply dropped). Raimunda herself goes from working two or three jobs to running a restaurant without missing a beat, then leaves that too when confronted by Emilio. But Cruz is glorious to watch here, all voluptuous emotion and energy, a sure fire Best Actress nominee. Just looking at her recent filmography, it's clear she should stick to European cinema - the U.S. just doesn't know how to utilize her talents. Almodóvar even gives her a song - 'Volver' - and the actress runs away with it. Carmen Maura is a funny, maternal ghost in a performance that plays like Anne Meara crossed with Anne Bancroft and Almodóvar newbie Portillo has real presence. Production design is bright and splashy if not quite the candy pop of Almodóvar past. He makes great use of his La Mancha locations, using its famous wind farms as a symbol of madness, just like Quixote's famous windmill.

Almodovar continues his loving homage to women with a charmingly complex and magical tale that starts out like a Alfred Hitchcock film with Raimunda hiding, at first, her dead husband, then getting rid of his corpse. The voluptuous Penelope Cruz, acting out of her usual characters, gives a funny, physical performance that enhances the black humor of “Volver”. But, this is only the tip of the iceberg as the killing begins the turning point that affects radical change in Raimunda’s life. Then, there is Raimunda’s relationship with her younger sister Sole (Lola Duenas); their not-with-it-but-somehow-manages-to-get-along-all-by-herself Aunt Paula (Chus Lampreave) who claims her dead sister’s (their mother’s) spirit takes care of her; the chance to have a job she loves and be her own boss; her friendship with Agustina (Blanca Portillo) who is battling cancer; and her resolution of long simmering hidden secrets that free la femme famille. Sure, it’s like a soap opera but that can be a good thing. Almodovar gets it right with a good story (by the director) and spot on ensemble acting nicely led by star Cruz. I have always had a thing for this beautiful actress ever since the helmer’s 1988 film, Women on the Verge of a Nervous Breakdown,” and that thing” continues unabated. Penelope shows outstanding screen presence in “Volver” and gives an award worthy performance, breathing life into Raimunda. It helps that she is surrounded by a mature, talented supporting cast - Duenas, Lampreave, Portillo Carmen Maura as long lost mother, Irene – who provide richly full bodied characters. Techs are solid and natural feeling with cinematographer Jose Luis Alcaine doing Almodovar’s obsession with the female derriere justice. Score, by Alberto Iglesias, art direction (Salvador Parra) and the rest of the behind the lens crew lend well to the director. We saw “Volver” on a wild and wooly night in an odd cinema in Kirkwall, Orkney Islands, Scotland (not a shabby place to be) but, for a couple of hours, I was transported to Pedro’s Spain.