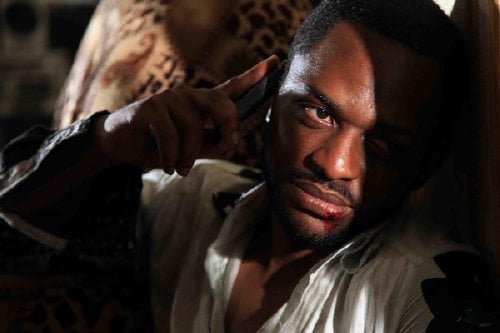 Riva (Patsha Bay) is a cool operator always looking for the big payoff. In Kinshasa, in the Democratic Republic of the Congo, gasoline is a scarce commodity that fetches big money. Riva comes across a whole truck load of barrels of fuel and comes to the Congo capital to sell it for a huge profit. But, the owner of the gasoline, Angolan gangster (Cesar Hoji Fortuna), has different plans and things will get hot in Kinshasa in “Viva Riva!”

In Kinshasa, fuel is a precious commodity, more highly regarded than individual lives. After making a fortune by stealing an entire truck's worth, Riva (Patsha Bay) dares to return home with a wad of cash and in the mood to spend it. No sooner is he back than he becomes obsessed with Nora (Manie Malone), the stunning girlfriend of local gangster Azor (Diplome Amekindra). Riva has plenty of friends and cajones to spare in his pursuit of the woman, but he also has his former boss, Angolan César (Hoji Fortuna), his thugs and an Army Commander (Marlene Longange) whose sister they hold, hot on his trail in "Viva Riva!" Documentary producer Djo Munga won 7 African film awards his first time at bat as a feature writer/director and he has done so for a surprisingly entertaining film, one in which the actions of one man spiral out and engulf the lives - and deaths - of many more. There's something a little John Huston going on here, "Beat the Devil" crossed with the double-crossing greed spurred by Sierra Madre's treasure, and yet despite the bloody fates awaiting most of his cast, Munga's film has an oddly upbeat vibe. That's probably due to Bay, who resembles Chiwetel Ejiofor and whose irrepressible charm and optimism in the face of some badly stacked decks permeates the film. Like many a cinema con artist before him, Riva meets the miniature version of himself in Anto (Jordan Ntunga), a black marketer of cell phones who gets the skinny on Nora and generally ingratiates himself to the older man. Riva also has a maternal stand-in in Mother Edo (Nzita Tumba), the brothel owner who becomes Riva's next stop, before he struts into the Sei Sei bar and takes Azor's seat right next to Nora. He certainly garners a lot of attention (he turns on Azor's goon at the bar, then orders a round for the house, effectively winning the crowd's favor) for a man with such badass enemies. When César and his goons are arrested by a corrupt judge, he murders him in cold blood after paying off the bribe. The commander walks a no-win line between upholding her job and protecting her sister, but she's got her own shady dealings, including lesbian lover Malou (Angelique Mbumb, spectacularly snaky and unsavory), a prostitute and a snitch, and black market fuel dealings with the local priest, himself no saint. Also in the mix is Riva's best friend J.M. (Alex Herabo) who plays a pivotal part in leading the wolf to his door when he mistakenly thinks Riva has been killed. Terrific cinematography and art direction capture this dangerously dynamic place of shantytowns and gated modern villas, where the women of Mother Edo's brothel 'perform' in tribal mask and paint while Nora and Malou favor outrageously colored hair and slinky fashion. The film is dark and vibrant, never more so than when Riva sees Nicole on an outdoor dance floor. Munga makes you feel the literal and figurative heat and dankness of the place. Not many films from Africa make it to these shores and when they do, we expect societal message films or naive folklore. "Viva Riva!" is something else entirely, a criss-crossing cast of characters in a land of opportunity only for those willing to flout the law to indulge in the excesses of the flesh.

Congolese first-timer (writer, director, producer) Djo Tunda makes an ambitious debut with a crime drama that is rampant with violence, sex and corruption. The only thing this talented young filmmaker can be accused of is being too ambitious with a multi-threaded story that starts at a fever pitch and keeps it up for 98 minutes. Riva is a handsome and cocky young man with street smarts. He is always looking for the quick and easy dollar and, when Cesar’s truck load of gas becomes “available,” he steals it and heads to Kinshasa where he can get ten times the petrol’s worth. But, Cesar does not like being ripped off and the elegantly dressed gangster and his henchmen follow Riva’s trail to Kinshasa. Cesar is not the only one who wants Riva’s blood, though. The cool young thug makes another enemy when he spots beautiful Nora (Manie Malone) in a night club doing an erotic dance. He makes advances toward the sexpot, only she is the girlfriend of local gangster, Azor (Diplome Amekindra), and he does not like Riva sniffing around his woman. Throw in a corrupt local military commander (Marlene Longange), a priest wanting the gas to help his congregation, guns (lots of guns) and sex (lots of sex) and you get an exciting African gangster flick. Kinshasa, a character in the film in its own right, is the backdrop for an old fashioned crime drama about gangsters and their molls. The story could take place in any economically depressed city but filmmaker Djo Tunda captures the unique feel of a place like Kinshasa. However, he does not make me want to go there for vacation. Be warned that the sex is graphic, plentiful and, apparently, a favorite pastime in Kinshasa. The high quality of production, excellent camera work (by Antoine Roch), exciting story and good acting across the board make this a treat for those of us who like a good gangster movie, from Africa no less.