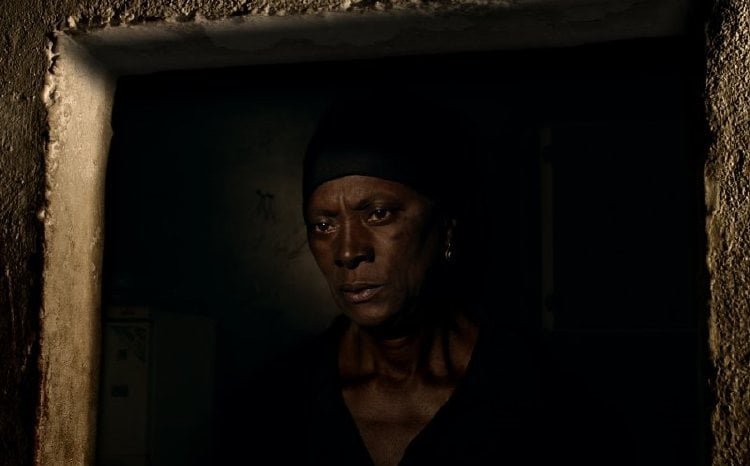 In a haven of concrete cubes in a poor neighborhood outside Lisbon, we see a man curled on a bed facing the wall on bloodied sheets as two men clean his hovel, burning those sheets with pictures of a young woman, eventually removing his body.  Days later, his widow will arrive from Cape Verde.  She is “Vitalina Varela.”

Cowriter (with Vitalina Varela)/director Pedro Costa introduced his non-professional actress star in his last film, "Horse Money," where she briefly recounted how she had waited for her husband to send her a plane ticket to Portugal for twenty-five years.   In this haunting portrait, we see what she learns about the man who abandoned her after his death and how her strength is contrasted with the men who have come before her.  The film, shot almost entirely at night by cinematographer Leonardo Simões, is breathtakingly beautiful, even with a neutral color palette in impoverished surroundings.

As soon as Vitalina deplanes, she is welcomed by an airport crew who give her their condolences but also advise that her husband’s home is not hers and that she should go right back.  Vitalina, we will learn, is made of stronger stuff.

In his humble home, Vitalina constructs a small altar.  The second of its two rooms is crowded with men – it is unclear whether they are truly there to mourn a friend or take advantage of the meal Vitalina has prepared.  No one makes a move to ease her burden.  A man who met Joaquim in prison offers the smallest comfort in a memory of how he once imagined he could make his home ‘pretty’ for his wife, but it is clear that despair has gripped the Cape Verdean males who have migrated here.

When we meet the man we have seen stumbling through the narrow streets at night, he is sitting facing away from rows of school chairs facing forward in a low-ceiled room with a dirt floor.  It is not until he uncrosses his thin, bare legs that we see the purple stole indicating he is a priest in a church abandoned like Vitalina.  Vitalina informs him she is not going to weep for these sad broken men and lashes out at Ventura for ‘siding’ with Joaquim, but this broken priest who has lost his flock settles their debts when they die and sings at his pulpit for her.

In this dark world of greenish gray, texture pops off the screen, often contrasted with the black skin of its subjects.  We see the naked black feet of Vitalina against the raised aluminum design of an airplane’s boarding stairs.  Later the smooth black hand of Ventura grasps a wooden utility pole as he stumbles through the dark.  In one beautiful bit of alchemy, clothespins appear as raised praying hands over black cloaks which dance as Vitalina edges past them.  It is a rude awakening when we emerge into daylight near the end of the film.

Costa is a member of the ‘slow cinema’ club and the film could arguably have benefitted from the excision of one or two scenes (one, a soliloquy in which Vitalina talks about fear of the Germans in the 1930’s, seems a complete non sequitur).   But stay with Costa’s vision and be transported back in time to a young couple happily building their own home together in Figueira das Naus on the Island of Santiago, Cape Verde.  “Vitalina Varela” towers.

"Vitalina Varela" will begun a run on May 8, 2020, at the Brattle Theater's virtual cinema - click here.