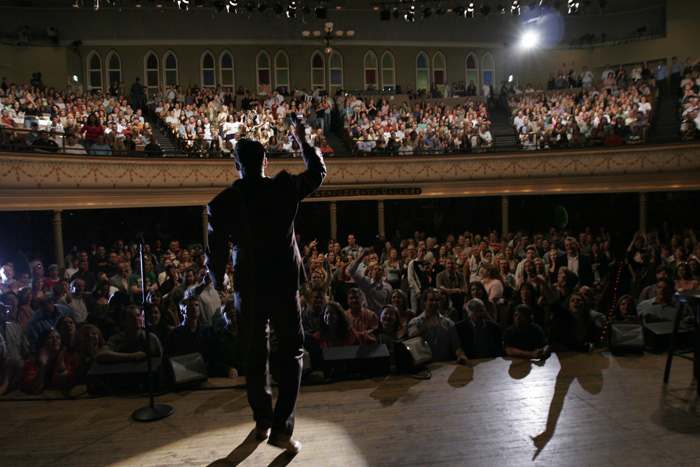 On 12 September 2005, actor Vince Vaughn and four handpicked comedians took to the road to bring their humor and improvisation to America. They traveled for 30 days and performed 30 shows in 30 cities in “Vince Vaughn’s Wild West Comedy Show: 30 Days & 30 Nights – Hollywood to the Heartland.”

The comedians – Ahmed Ahmed, John Caparulo, Bret Ernst and Sebasrian Maniscalco - jumped at the chance to help Vaughn create a road show that pays homage to the likes of Buffalo Bill’s original Wild West Show. Opening the tour in Hollywood, MC Vaughn’s starts off by introducing his close friend, Jon Favreau, and young actor Justin Long and giving an improv performance to the delight of the audience. Then, one by one, the four comedians get the chance to strut their stuff. The tour is a nonstop trek that ends in Chicago but makes its comedy stops in Bakersfield CA (home of country music great Buck Owen, who makes an appearance), Las Vegas, Phoenix, El Paso, Oklahoma City, Little Rock, Birmingham, Atlanta, Memphis, Detroit and a host of other cities. Unfortunately, plans to entertain in New Orleans and Baton Rouge had to be cancelled because of the devastation by Hurricane Katrina. Undeterred, the traveling show visits one of the many evacuee relocation centers and stage an impromptu matinee show with the proceeds going to the aid of the flood victims. The comedians fare well between their varied, funny performances and talking head interviews with the comics and their families. Ahmed Ahmed gets excellent mileage out of his story about his arrest at an airport just before the 2004 election because of ethnic profiling. He takes a sobering experience and turns it in humor, though with a socially conscious edge. The other stand-up men get their due too. Vaughn’s idea and its execution make for a unique entertainment experience. The entire troupe’s dedication and unslacking energy, though with a few bumps along the way, keeps pace with the grueling cross-country trip by bus that is literally non-stop.