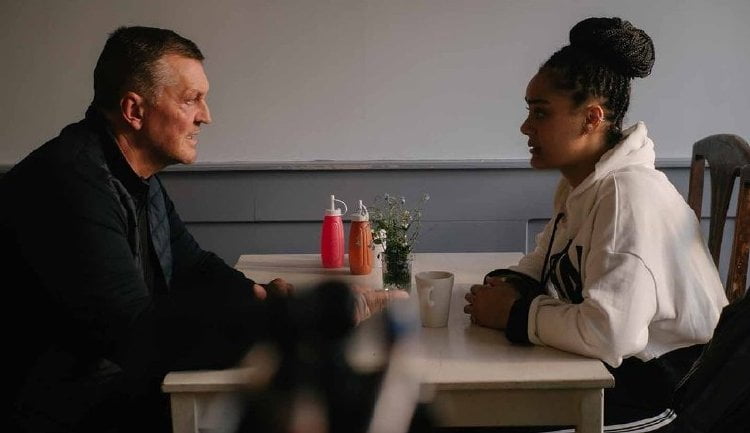 In a field at night, Roy (Robert Glenister, "Live by Night") and Johnny Garrett (Tomi May, TV's 'Line of Duty') demand that their terrified hostage strip as they train their guns on him.  He owes them money, but is let off ‘easy’ with a game of Russian roulette.  This same man turns out to be Sean Franks (George Russo), a drug-addicted loser who idolizes older brother Eddie (Craig Fairbrass, "The Bank Job") but lets him down at every turn, the recently released con who wants to turn his life around being forced to play the “Villain.”

Director Philip Barantini makes his feature film debut with a gritty English gangster film that, while covering no new ground, is steeped in local atmosphere and a sympathetic performance from Fairbrass, who embodies Bob Hoskins' tough-yet-soft demeanor mixed with the brute physicality of Vinny Jones in a handsomer, more square-jawed package.  Prepare yourself for some violence, a dismemberment scene carried on for a sadistically long time accompanied by stomach churning sound.

If at first it seems sweet how thrilled Sean is to pick his brother up outside the prison yard, we will learn soon enough that it is because the younger man cannot handle anything on his own.  Sean lives with Rikki (Eloise Lovell Anderson), a junkie stripper who presumably only hangs around for his steady drug supply.   The pub Ed left behind has fallen into horrendous disrepair, the apartment above it he’d planned to move into ruined with mold and rot.  The pub’s clientele is undesirable as well, there to watch Rikki and run up bar tabs Sean’s too weak to control.  When local thug Freddie Bagshot (Michael John Treanor) orders champagne and refuses to pay, he meets Ed’s fist.  Then Ed lights a fire under his brother, the two completely renovating the business that is the Green Man Pub.  Soon enough, Roy and Johnny pay a visit and Ed thinks they’re there because he beat Bagshot to a pulp.  He’s shocked to learn about Sean’s debt, a debt so large it could mean losing their pub…or lives.

Writers Greg Hall and George Russo compound Ed’s family troubles by giving Ed estranged daughter Chloe (Izuka Hoyle, "Mary Queen of Scots"), who happens to have a baby with the same guy, Jason (Taz Skylar, "The Kill Team"), who delivers drugs to Sean outside the pub.  Ed’s humanity will come through by the way he treats a decent local pawn shop owner and his daughter, his redemption hard won in reestablishing his paternal relationship.  But nothing Ed can do will alleviate the millstone around his neck that is his brother Sean.

Barantini’s gotten good performances from his cast, Fairbrass’s explosions into violence shocking considering his otherwise quiet manner,    Glenister more threatening in his calm than Treanor in his bluster.  Production design is aces, the down-at-its-heels pub’s aroma of depravity and despair almost wafting off the screen, its renovation a believably unfussy transformation.  I wasn’t expecting much from “Villain” and was pleased to get more than I’d bargained for, a genre film whose execution lifts it above its clichés.

Eddie Franks (Craig Fairbrass) is just out of prison after a ten-year stint and has plans to get his life back. He wants to reconnect with the estranged daughter that he barely knew and clear the huge debt that his drug-addled brother, Sean (George Russo), got himself into with the mob. Getting out of the business, though, is one thing, but staying out is quite another in “Villain.”

I knew I knew Craig Fairbrass the instant I saw his rugged mug at the film’s start. It was way back in 1993 with the Sylvester Stallone suspense actioner “Cliffhanger” where Fairbrass played Delmar, the sadistic henchman to John Lithgow’s nefarious crime boss. It was a relatively small role, but I've remembered the actor since.

Eddie has served his time and wants a return to the order of the life he once had. Things seem to be getting back to normal when two henchman of mob boss, Roy Garrett (Robert Glenister), walk into the bar and order expensive champagne and more on the cuff. When Eddie demands that they pay their sizable bar tab, they send him packing. But, the volatile ex-con will not be deterred. This leads to big trouble, and not just for our hero, Eddie.

An ex-con trying to get his life back story has been with us for decades and actor-turned-director Philip Barantini does not give us a new turn on that old tale. But, with Fairbrass and the solid supporting cast, the filmmaker pulls off a well-told story with a sympathetic lead.