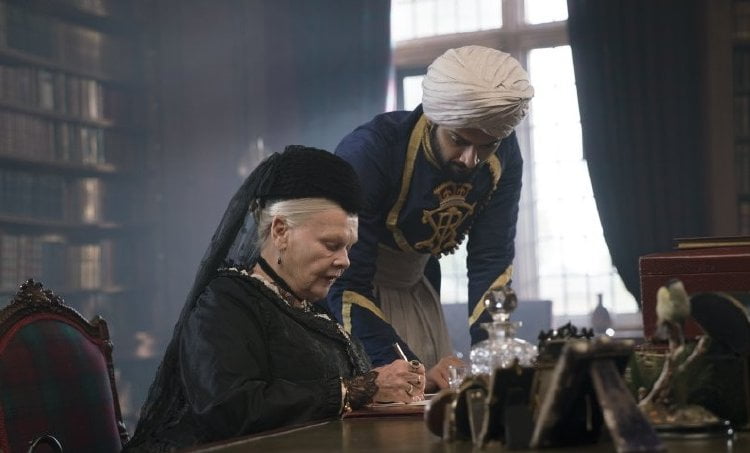 Late in her long reign as Queen of the British Empire and Empress of India, Victoria (Judi Dench) has grown bored with ruling her globe-spanning domain. That is, until she makes eye contact with a young Indian man, Abdul Karim (Ali Fazal), who is brought to England to present the queen with a special gold coin. This brief encounter will begin a close relationship that will last for years in “Victoria and Abdul.”

After sitting through “Victoria and Abdul,” I took a look back at director Stephen Frears filmography and found that his career can, roughly, be divided into two “eras.” The first era in his feature film career began with “The Hit (1984),” “My Beautiful Launderette (1985),” “The Grifters (1990) and up to “Dirty Pretty Things (2002).” These are all edgy, down-and-dirty movies that pushed the indie envelope. Era number two began in 2005 with “Mrs. Henderson Presents” and includes his more sentimental works like “The Queen (2006),” “Philomena (2013),” “Florence Foster Jenkins (2015)” and, now, “Victoria and Abdul.” Dame Judi reprises the role she first played, back in 1997 (for director John Madden), as Queen Victoria, about the second man in her life in “Mrs. Brown.” Dame Judi won her Oscar in 1999 playing another Queen of England, Elizabeth I, in “Shakespeare in Love.” Dench, in “Victoria and Abdul,” lends her queenly presence to her role, now as the aging monarch who is smitten with the exotic, handsome and young Abdul. There is no hint of an actual romance between the title characters. Instead the relationship between queen and subject is one of, mostly, mutual affection and admiration – he for his Queen and Empress of India, she for her handsome, exotic munshi (teacher). Ali Fazal, as Abdul, has the exotic good looks to be the apple of his queen’s eye, but I never felt his character flesh out to answer my question: Why would the queen go so against royal protocol and go so far as to propose her protégé/mentor for a knighthood? The answer to the question, I think, is that she simply wanted to piss off her court, especially her son and future king, Bertie, Prince of Wales (Eddie Izzard). The supporting cast is a wasted wealth of acting talent with Michael Gambon, Olivia Williams, Tim Pigott-Smith and other notable thesps given minor roles surrounding their queen. Notable, though, is Adeel Akhtar as Mohammed, who was conscripted to be a part, with Abdul, of the coin ceremony. His plight – always cold in the damp English clime and homesick for India – is used for comic relief, mostly, but I felt a real sympathy for the little guy who just wants to go home. The production for “Victoria and Abdul” is sumptuous and travels from Delhi and Agra to the Isle of Wight and the Scottish highlands. The pomp, circumstance and formality of the royal office are shown in detail, making my anti-royalist blood boil with its sheer decadence. The look of the film, though, outshines the uninspired story.