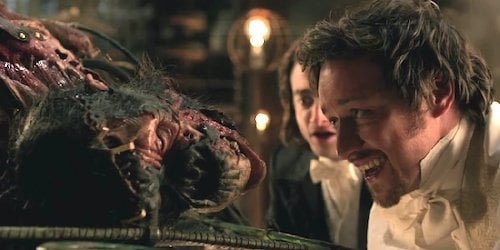 We have seen and heard the story of Mary Shelly’s famous master of creation and his monster in many guises. Now, we get a look at the life of one of literature’s most famous characters, but this time through the eyes of his trusted assistant, Igor, in “Victor Frankenstein.”

A gentleman student (James McAvoy) has ulterior motives for being at a London circus, but when trapeze artist Lorelei (Jessica Brown Findlay, 'Downton Abbey's' Lady Sybil) plunges to the ground he is witness to the medical brilliance of the man who saves her, a hunchbacked clown (Daniel Radcliffe). The abused captive is sprung from his prison by the young college man and quickly dubbed Igor after the friend who has mysteriously vanished from his apartment. At first, Igor is amazed by the experiments his mentor is mounting, but he quickly comes to fear the mad motivations which spark "Victor Frankenstein." 'You've heard this story before' we're told by Igor, whose point of view drives screenwriter Max Landis's ("American Ultra") adaptation of the classic Shelley tale, but in attempting to spin it differently, director Paul McGuigan ("Wicker Park," PBS's 'Sherlock') has crafted the kind of weird hybrid which turned Guy Ritchie’s rendition of Sherlock Holmes into pop cultural mush. It's unfortunate, because the two leads are dynamic, McAvoy's insane intensity neatly balancing Radcliffe's soulfulness. The film is fleet and funny until the stakes are raised, Frankenstein's ultimate creation an unfortunate anticlimax. In escaping from Barnaby's (Daniel Mays, "The Bank Job") circus, the fugitive duo raise the suspicions of Inspector Turpin (Andrew Scott, "Spectre"), who's been tracking the disappearance of animal parts around London. Igor's barely had time to adjust to the outside world when Victor throws him against a post and drains his 'hump' with a huge syringe, thrusting him into a leather brace. A shower and a shave later and Igor, who once looked like a hunched Robert Smith, now is a handsome, upright young man. This will provide some amount of cover for the two, whose images appear on wanted posters, Barnaby having accused them of theft and murder. After showing Igor a model for his goal, disembodies eyes he can jolt to flickering life, Igor's put to 'piece' work, connecting the various biological parts Victor delivers with regularity. But when Victor books a poorly attended demonstration at his college, his monstrous creation disgusts all but Finnegan (Freddie Fox, "Pride"), son to the third largest fortune in England. The creature, mostly chimp, breaks free and must be put down, but only Igor realizes that what Victor's created isn't an acceptable form of 'life.' The film devolves into a tepid romance between Igor and Lorelei, now the kept beard of Baron Bomine (as Igor is to Victor?), and exposing Finnegan's duplicitous motives (which cause him to dump a bound Igor in the Thames) and Victor's crazy ones as Turpin stays hot on their heels. There's too many threads here, just as there are too many people assisting Victor at Finnegan's Scottish castle where he's built an elaborate rigging to raise his Prometheus up to the thundering skies. McAvoy's immensely entertaining, throwing Radcliffe about, tossing drained liquid out the window like the contents of a chamber pot to feminine shrieks below. He's a social misfit, an ironic counterpart to the former circus freak's kind refinement. The production is fine, less Gothic than Victorian industrial, but the tale's development does nothing to further illuminate Shelley's cautionary story. Even worse, it leaves us with a clear path towards a sequel it's done nothing to warrant. Grade:

Director Paul McGuigan and scribe Max Landis take Mary Shelley’s 1818 horror classic about a madman and his monster and change the point of view. Rather than the usual third person look at the doctor and his experiments to create life from death, the filmmakers make the story’s narrator the nameless carnival freak (Daniel Radcliffe) saved by the young medical student Victor (James McAvoy), whom he names Igor. With an exception or two, “Victor Frankenstein” is the kind of film that raises the question: why was it made? There is little gained from Igor’s PoV of the ambitious, yet mad, almost-a-doctor who deigns to play God, except to lay the groundwork for a new/old monster creation tale. Also, a romance between Igor and his damsel-in-distress, Lorelei (Jessica Brown Findlay), is there for what reason? Every dark cloud has a silver lining, they say, and that is true here with James McAvoy as the young man who pushes the boundary of life over death. But, do not think that there is no mirth in Victor. McAvoy makes young Frankenstein almost a parody of the character we know and love and put his own spin on it, often with a wry grin. Oddly, “Victor Frankenstein” has its amusing moments and takes from many previous sources, including Mel Brooks’s comedy classic, “Young Frankenstein,” believe it or not. Production is overblown with special effects, lightening and explosions taking the place of story telling. This is not your dad’s “Frankenstein,” more is the pity, and time would be better spent watching the marvelous 1931 original.