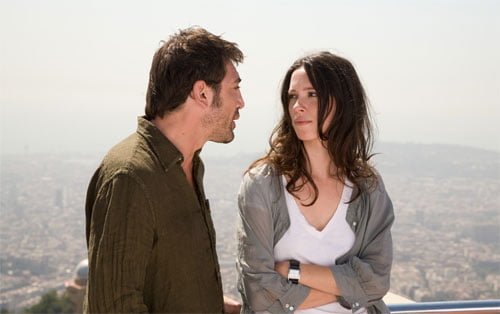 Two girlfriends get the chance to spend the summer with family friends in sunny Spain. While attending an art exhibit there, they cross paths with handsome artist Juan Antonio (Javier Bardem). The three meet again, later, and he invites the two young women to fly to Oviedo for the weekend. One is whole-heartedly for the idea, the other equally against it. In the end, they take the trip and things become topsy-turvy for “Vicky Cristina Barcelona.”

An engaged architectural student gets an opportunity to vacation and study in Spain at the home of relatives and invites along her flightier filmmaking friend. That summer is all about "Vicky Cristina Barcelona." Writer/director Woody Allen ("Match Point," "Cassandra's Dream") has assembled one of his most unusual casts for his latest, European set film and his combination of recent favorite (Scarlett Johansson, "Scoop," "The Black Dahlia"), new discovery (Rebecca Hall, "Starter for 10," "The Prestige") and local blood (Javier Bardem, "No Country for Old Men" and (Penélope Cruz, "Volver") sizzles and sparks. "Vicky Cristina Barcelona" isn't one of Allen's deeper films - the characters generally end up just where they started - but it is a highly entertaining romp that contrasts the pitfalls of romantic impulsiveness against stodgy stability. Vicky (Hall) is the brunette, grounded, responsible one, engaged to Doug (Chris Messina, "Ira and Abby," "Made of Honor") but taking advantage of an opportunity to research her thesis about the Catalan cultural identity. Cristina is the blonde, passionate, spontaneous one, looking for someone to sweep her off her feet. When the two young women are brought to an art gallery reception, Cristina hones in on José Antonio (Bardem) and finds out he is an infamous artist emerging from a relationship in which one tried to kill the other. A few hours later, Vicky and Cristina are dining in the same restaurant as the man and Cristina cannot keep from glancing his way. He approaches their table, says they are both enchanting and asks if they would like to accompany him to the small town of Oviedo for a weekend of eating, drinking and making love. Vicky is appalled by his forwardness. Cristina is intrigued and convinces her to go anyway. At the end of a long day of sightseeing and wine sampling, José Antonio invites them to his room. Cristina arrives, declaring that he will have to seduce her, but she becomes violently ill and so he spends the rest of the weekend with Vicky who is surprised by the man she grows to know. Seduced by an evening of romantic Spanish guitar, Vicky succumbs to José Antonio's considerable charms. Back in Barcelona, José Antonio romances the available Cristina and Vicky finds herself in a quandary when Doug calls suggesting they marry in Spain. Cristina moves in with the artist and all is well until an urgent phone call one night - Maria Elena (Cruz), José's ex wife, has tried to kill herself. Suddenly Cristina finds herself between the fiery duo when Maria Elena has nowhere else to stay, but she also turns out to be the ingredient missing from their relationship and they progress into a happy threesome. Meanwhile, their hostess Judy Nash (Patricia Clarkson, "Far from Heaven," "Married Life"), whom Vicky catches kissing a man other than her husband (Kevin Dunn, "Transformers," "Lions for Lambs"), believes that Vicky is going down the same unhappy path she has and tries to put Vicky back into José Antonio's path. While Woody Allen comes to no conclusions regarding the complexities of love, his contemplation of all its mysteries is delightful. Except for the inexplicable and entirely unnecessary droning narration (Christpher Evan Welsh, "The Stepford Wives," "Keane"), which merely points out the obvious or that which we can easily deduce, Allen doesn't miss a mark here. His direction is assured, his dialogue delightful, his plotlines neatly paralleled. Just as Vicky appears to be Cristina's opposite, so is Cristina's lack of artistic self-confidence diametrically opposed to Maria Elena's uber talents (Maria Elena encourages Cristina's photography, eventually becoming her subject). Vicky and Doug's relationship is reflected in Judy and Mark's, Vicky's future hilariously doomed with Doug's post-honeymoon deduction that she is mad because the couple they met 'beat our brains out at bridge.' Spanish flies between the impassioned Maria Elena and José Antonio despite his constant admonitions to 'speak English!' for the benefit of Cristina. Once Cristina recognizes her 'chronic dissatisfaction' and leaves the situation, José Antonio and Maria Elena's history will repeat itself in a new configuration. The cast is terrific, from Cruz's agitated spitfire to Bardem's more introspective artist (watch the gentle way he coaxes Vicky into self realization's by questioning her answers to his questions). Hall is wonderful as the centered woman thrown off balance and Johansson, clearly comfortable with Allen, hasn't been this natural since her last Allen film. There has been a lot of buzz about her darkroom seduction by Cruz, but it is a tempest in a teapot, the two seeming more sisterly together than steamy. Chris Messina and Kevin Dunn both register as nice guys without a clue that their mates are not fulfilled. Patricia Clarkson's transformation from gracious hostess to distressed confessor is a little strained. Allen revels in Barcelona, photographing (cinematography by Javier Aguirresarobe, "Talk to Her," "The Sea Inside") all the relevant points of interest, paying special attention to the architecture of Antoni Gaudí. The film is bookended with Giulia y Los Tellarini’s upbeat song “Barcelona"

Vicky (Rebecca Hall) is a straight-laced, down to earth and a little uptight young woman engaged to be married. Cristina (Scarlett Johansson) is her polar opposite, adventurous, a bit promiscuous and loves to have fun. Still, they are friends and when Vicky is invited to summer in Spain, she asks Cristina to join her. They start out doing all the cultural things ­ visiting museums and art galleries ­ when, at one exhibit, they meet handsome and proud artist Juan. Cristina immediately takes a liking to Juan while the ever-faithful Vicky thinks only of her fiancé, Doug (Chris Messina). Secure in her upcoming nuptials, Vicky reluctantly agrees to join Cristina and Juan. But, when you have two attractive woman mix with a charismatic, passionate Spanish painter, something sexy is going to happen. Seventy-something auteur Woody Allen shows that he still has what it takes in this romantic comedy that goes in fun directions. As both Vicky and Cristina fall for he charming Juan an almost idyllic life befalls the young women. From the start, though, Juan Antonio talks frequently, with affection and respect, of his volatile ex-wife Maria Elena (Penelope Cruz). About halfway through the film, Maria Elena shows up in the flesh and it is an astounding arrival, indeed, with Penelope Cruz giving one of her best performances to date. You can see why Juan had married her then divorced her when he realized that their relationship was like trying to mix water and oil. The romantic trio is well played (though overshadowed by Cruz) by Hall, Johansson and Bardem. They are all attractive and smart with Scarlett Johansson giving a relaxed, assured performance as the fun-loving Cristina. Rebecca Hall has the tougher role as the buttoned down Vicky, who protests too much when Juan comes on to her. Javier Bardem, as always, proves himself a versatile actor and he fills the role as the beguiling, handsome artist. Patricia Clarkson and Kevin Dunn are almost transparent as the couple who invite Vicky and Cristina into their home. It is refreshing that Allen has shaken the Manhattan dust off his shoes and brought his filmmaking talents to Paris, London and, now, sunny Barcelona. Woody, with Spanish cinematographer Javier Aguirresarobe (working with the director for the first time), makes the locale warm and inviting. Allen also keeps up with his signature white on black credits while playing one of his favorite tunes. And, he still shows he maintains his sense of humor. One notable shortcoming in “Vicky Cristina Barcelona” is the narration by Christopher Evan Welch. Allen, who frequently uses voice over ­ himself or a Woody stand in ­ made a misstep this time. Welch has a bland voice and uses very little beyond the monotone. I wonder how it would have turned out if Allen did the talking. Still, he comes up with an even charmer that gets a huge lift with the arrival of Cruz.