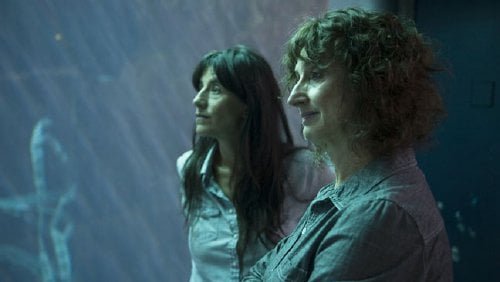 This winner of the 2013 Berlin Film Festival's Silver Bear from writer/director Denis Côté, whose last film was the haunting documentary "Bestiaire," is a confirmation of his unique, emotionally observational voice. "Vic + Flo" won't necessarily play well to those who like their stories all laid out for them, as Côté drops us into the action with little explanation of where his characters are coming from. But his actors pull us into his strange slice of life on the edge of a forest where humor, kindness, longing and brutality make for an artful mix. We have no idea what Vic's relationship is to her uncle, whom she seems responsible if not necessarily affectionate about caring for. When a man, Yvon (Guy Thauvette), shows up to check on her, gives her a hug and some cash, only later do we learn he was her brother. A younger man, Guillaume (Marc-André Grondin, "C.R.A.Z.Y.," "Goon") appears, saying he may appear at any time, and now we know Vic has a parole officer. Flo's arrival is introduced in the most unusual way - hidden under bedclothes, where she and Vic enjoy a frisky reunion, Vic filling Flo in about their new surroundings ('Where's your garden gnome?' Flo flirts after being informed they may start a garden.) While Vic seems content with the solitude of their new surroundings, the much younger Flo begins to tool around in their golf cart, meeting up with Guillaume on the road. He tells her Vic has lied to her, that she is not supposed to have contact with a convicted criminal, filling in a bit more back story. Flo also frequents a local bar where she follows up on her attraction to a male pool player. It appears Vic's anxiety about her lover's long term plans has validity. Alone at the shack, Vic is disturbed by the presence of a woman at the end of their drive, but Marina (Marie Brassard, "The Claim") assures her she's just checking the sewer line and the butch woman's engaging manner makes Vic laugh. Vic agrees to let her use their forest trail to access the lake, a commitment that unsettles Flo. There is a lot bubbling beneath the surface here. Robitaille intrigues as a woman who just wants to retreat from life with her lover, concerned that Flo will want more excitement as well as the 'large hands' and 'hairy chest' of a man. Her misanthropic behavior is upended when she's forced to engage, and although Yvon's hinted (or joked?) about the reason for her commuted life sentence, Robitaille's Vic is deserving of the quiet life she yearns for. Bohringer exudes a raw sexuality as Flo and although we see her unfaithfulness, her actions confirming Vic's suspicions, the actress combines Flo's mystery with a palpable affection for her costar. The biggest surprise here, though, is Grondin, who may have the film's biggest arc as Guillaume, a man Flo proclaims 'cute' but also correctly pegs as gay. His initial by-the-book questioning of Vic and interrogation of Flo has an underlying empathy which becomes stronger as the film progresses. Guillaume becomes their champion, their life witness. Brassard, meanwhile, has a reverse arc, and the actress makes Marie/Jackie an impish harbinger and cold blooded executor of their fate. Côté doesn't emply much camera movement, instead carefully framing his characters in their environment - his shot reverse shots have more 'action' than his subtle pans and tracking shots. Cinematographer Ian Lagarde uses washed out nature colors, buttressing the film's tone of being in a temporary state, neither here nor there. Composer Melissa Lavergne's deeply foreboding percussive score is playfully rejoindered at the closing credits with a perverse pop song, Côté using whimsical touches like the reappearance of his scout trumpeter to ease the sting of his finale.