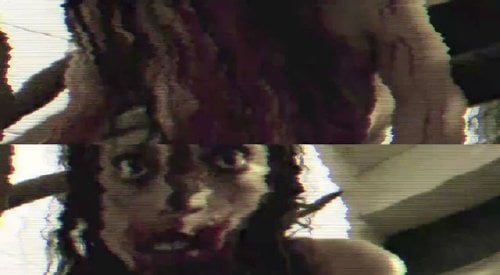 A group of criminals take on a seemingly easy heist. All they have to do is break into a secluded house and locate and take a particular video tape and bring it to their boss. Instead, they stumble upon a grisly scene and a store of hundreds of tapes. They must collect them all to find the right one and what they see as they watch five of the tapes fills them with horror and dread as they play the “V/H/S.”

A group of thieves are tasked with retrieving a found footage videotape from a remote house for a big payday, but although they're told 'they'll know it when they see it' what they find is a dead body, daisy-chained televisions and VCRs and videocassettes everywhere. One by one they begin to check out tapes in the anthology horror "V/H/S." Adam Wingard (the upcoming "You're Next") directs 'Tape 56,' the short which ties the other five stories together and its emblematic of the film - chaotic cinematography capturing unsympathetic characters in illogical stories. At least Wingard honored the anthology's title with his medium - most of the other shorts are clearly digital, so why would they have ended up on VHS cassettes? The first short, although hardly surprising in where it heads, is the most satisfying. "The Signal's" David Bruckner uses the campy conceit of video rigged eyeglasses for his protagonist to make a sex tape with the hot chick he'll presumably pick up on a drunken night out with his buddies. As his jockier buds pick up women, the first time we see Hannah Fierman's Lily in the background, we know there' something off. She's terrifying in her needy foreign weirdness and the film's final images play off earlier suggestion beautifully. The only complaint here is one POV shot of the bottom of a shot glass that would have required our guy to throw the drink in his eye. Ti West ("The House of the Devil," "The Innkeepers") has perhaps the most genre chops coming into this so his cheats to set up his last minute twist anger. A couple on the road touring the Grand Canyon and the Old West rent a room in a seedy motel where Sam (Joe Swanberg) is shaken by a strange girl who knocks on their door to ask for a ride the next day. Stephanie's (Sophia Takal) not happy with hubby's pressure to make a sex tape. In the middle of the night, someone creepy crawls through their room, running knife blade against skin, stealing cash and swishing toothbrush around the toilet. The second night has more dire results. Found footage rules are stretched to the breaking point ('Did you erase it?' Um, why did you record it?). The worst episode by far is the center piece from "I Sell the Dead's" Glenn McQuaid. Presumably meant to be tongue-in-cheek, 'Tuesday the 17th' is an utterly meaningless trip to the woods with four obnoxious pieces of meat and a killer hidden in signal noise. Joe Swanberg's ("Hannah Takes the Stairs") 'The Sick Thing That Happened to Emily When She Was Younger' is a brighter note as Emily (Helen Rogers) Skypes her boyfriend James (Daniel Kaufman) terrified by noises in her apartment. We learn there really is something afoot as we become more and more aware of Emily's mental problems which cause her to react in self mutilation. This one has genuine creeps, although its fx guys could probably use some anatomy lessons. The final entry again gives the feel of real videotape as its title, '10/31/98,' should indicate. This looks like it was filmed in Ti West's "Devil" house as a bunch of guys arriving for a party find an empty house of horrors instead. The Radio Silence filmmaking group throw in everything but the kitchen sink and we can all but see the guys spraying smoke down the hallways. Once again, though, pandemonium rules and the ending is anti-climatic. Anthology films are never strong across the board, but this one is a real muddle. The connective story never has a pay off - just what were they looking for and why? - my guess would be confirmation of the existence of a succubus, but they couldn't be bothered. Many are weary of the found footage concept, but there's still room for a good one. What "V/H/S" proves is that they may cover filmmaking challenges and monetary obstacles but they still need creative thinking and strict adherence to rules to work.

This is a loosely strung compilation of “found” video tapes that uses the robbery as the bumper between each of the five horror episode as one of the thieves watches the tapes to find the right one. “You will know it when you see it,” they are told by their faceless employer. Meanwhile, the rest of the thieves are also trying to locate “the” tape but come across hundreds that all need to be watched. Danger is lurking in the dark, isolated house as they collect the stash and it is about to spring upon them. The five ‘tween stories are cookie cutter horror shorts, beginning with a group of guys going out on the town with one wearing eyeglasses with a video camera and microphone. They get thrown out of a club and are followed by a strange, waifish young woman and, when they all go to a motel, all hell breaks lose. The next story has a young couple video recording their vacation. Things are going great until a strange young woman asks them for a ride and their holiday goes to hell. Following is the typical four friends taking a trip to a scary cabin in the woods only to be hunted down by an unseen killer. Next is a haunted apartment yarn with the protagonists only seen via Skype. Lastly, four costumed party-goers pick the wrong house to visit on one fateful Halloween evening. Ten writers-directors are accredited to this series of tied together horror shorts. Each shows a lot of imagination but, with only a short time given to each of the five episodes and the bumper (the whole film is 115 minutes), the stories lean heavily on clichés. The whole film is shot in subdued light, making darkness a key element in setting up the jump-out-from-the-dark scares. Still, the 17 to 24 year old male demographic will enjoy the show.