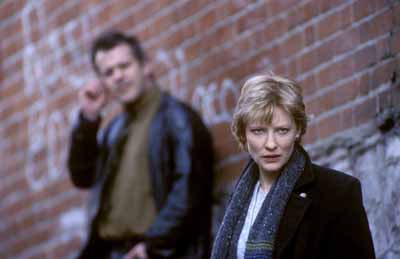 In the mid-1990s the streets of Dublin became a battlefield with the city's drug lords vying for territory to hawk their deadly ware. Veronica Guerin (Cate Blanchett), a leading journalist in Ireland, turns her attention toward the growing problem that is spreading like a cancer and begins to author scathing exposes that brings the drug lords, known as the General, the Coach, the Monk and other such monikers, to national attention. But, fearless though she may be, the plucky, dedicated journalist is not invincible in director Joel Schumacher's docu-drama, "Veronica Guerin."

In the 1990s, Dublin was held in the thrall of the notorious Martin Cahill (Gerry O'Brien), an organized crime king known as The General, while thousands of its children became heroin addicts then forced to turn to lives of crime. As an overwhelmed police force stood by, one journalist risked verbal and physical threats, including a shooting, trying to trace the drug distribution from the bottom up. She was Veronica Guerin (Cate Blanchett, "The Lord of the Rings"). Writers Carol Doyle ("Washington Square") and Mary Agnes Donoghue ("White Oleander") take the well traveled, standard biopic route and attempt to paint Guerin as a martyred folk hero with only passing references to a journalistic style which was often criticized. Under Joel Schumacher's ("Phone Booth") direction, Blanchett gives a performance that is too breezy and her Veronica often comes across as daftly naive. The film begins at the end, letting any audience members unfamiliar with the story know that Guerin was killed in a roadway hit after successfully getting off multiple speeding and parking ticket charges. Flashing back, we meet the brash reporter who visits a slum literally carpeted with hypodermic needles, weasels her way into police files via her detective buddy Chris (Don Wycherley, "When Brendan Met Trudy") and raps right on the Cahills' sliding glass doors from their backyard. After Cahill is killed, Guerin begins to look elsewhere for her drug source armed with a tip from Chris and her intuitive way of reading criminal contact John Traynor (Ciaran Hinds, "The Road to Perdition"). Traynor's love of celebrity flies in the face of boss John Gilligan's (Gerard McSorley, "Angela's Ashes") tactics and Traynor is warned that he will be held responsible if Gilligan's name ends up in print. Traynor hires a hit man who shoots Veronica in the leg in her home's foyer on Christmas Eve, confirming the fears of her mother Bernie (Brenda Fricker, "My Left Foot"), brother Jimmy (Paul Ronan) and husband Graham (Barry Barnes), who is also concerned for their son Cathal (Simon O'Driscoll). Guerin reacts by visiting the city's known criminals the likes of Brian Meehan (Paudge Behan) and 'The Monk,' on crutches no less, to deliver a typed question - 'Did you have me shot?' She then tracks Gilligan to his equestrian estate, Jessbrook, strides up to his front door and rings the bell. Her explosively unexpected reception is one of the film's highlights. Asked by the police whether she wants her story or to press charges, she initially continues tracking the story, but a phone threat from Gilligan targeting her son changes her mind and seals her fate. The film's opening is repeated followed by her street-mobbed funeral procession, a coda on the arrests of the people responsible and facts regarding the reduction of crime rates thereafter. Blanchett is a fine actress, yet her character's fate here draws little or no emotional response. She plays Guerin as someone who jumps to the next thing without completing the first, giving an impression of flightiness rather than doggedness. This is most blatant in a scene Schumacher choreographs by having Blanchett sweep into her family house, twirl while breathlessly describing her day to her husband, then waltz into the backyard where she joins a children's soccer game without missing a beat. Blanchett is most effective when she is forced to admit her fear to Graham after Gilligan's attack and subsequent phone call, the character finally humanized. McSorley is frightening as Gilligan, hiding his criminality behind an air of quiet bad taste which can erupt with startling suddenness. Hinds has the most complex character as Traynor and keeps us guessing as to how honest his apparent liking for Veronica is. In smaller roles, O'Brien makes for a more menacing Cahill than Brendan Gleeson's charismatic turn in "The General" and Gina Costigan recalls Cara Seymour ("American Psycho") as Traynor's watchful girlfriend. Colin Farrell has a cameo as a tattooed soccer fan who makes a pass at Veronica, a bit of stunt casting which only succeeds in interrupting the flow of the film. Schumacher paces the film well, making his points and moving on. Production design by Nathan Crowley ("Insomnia") presents varying degrees of social strata in a gray Dublin nicely filmed by Brendan Galvin ("Behind Enemy Lines"). "Veronica Guerin" needed a more conflicted heroine in order to draw an emotional response. It is merely a passable biopic which should have foregone the Hollywood model.

This story of the irrepressible reporter of the title joins the rank of dramas about the life and times of other journalists in such films as "All the President's Men," "Salvador" and "The Killing Field." While "Veronica Guerin" isn't in the same league as these films it does represent a solid telling of the dedication, bravery and intestinal fortitude of one reporter who, naively believing in the protective shield of being "press," went head-to-head with the most brutal and ruthless of the drug hierarchy in Ireland. It is a fight she can't win and, as we learn, makes the biggest sacrifice. The film begins as it will end with Veronica facing a judge for her thousand plus parking tickets and numerous speeding violations. To her incredulous surprise she is let off with only a (big) fine and in possession of her precious driver's license. She speeds off, calling everyone she knows on her cell phone to break the good news. Meanwhile, a pair of gun toting thugs on a motorcycle takes chase and catches up with her at a traffic light. As Veronica, talking to her editor and oblivious to the danger, turns to look at her pursers, the passenger pulls a gun and…. Time jumps back a couple of years and Veronica is entering the dregs of Dublin's neighborhoods where used heroin syringes litter the street and are playthings for the little kids who must grow up in such squalor and danger. She tries to get one of the addicted denizens to grant her an interview and reveal the source of the drugs that plague them. Her pleas fall on deaf ears even when she observes the drug dealers leaving their marketplace in brand new Mercedes. Veronica learns from a local ant-drug activist parent the chilling statistics of death in their streets due to heroin addiction. She is resolved to make the public aware of the problem and force the government and police into action. There is a price for this evangelic desire to rid the streets of drugs and its sellers and Veronica forms a relationship with mobster John Traynor (Ciaran Hinds), known in his world as The Coach. John is enamored with his notoriety and the attention of the pretty reporter and plays a game with her, dropping false tidbits of information that implicate another drug lord, The Monk (Alan Devine). But, in John's shady world, discretion is more important than treachery, and his talks with Veronica come to the attention of John Gilligan (Gerard McSorley), the top drug kingpin who lives like an Irish laird, raises horses and will beat a person to death with his bare hands if crossed. Veronica, confident that she is invincible, is not prepared for the sudden, brutal response that Gilligan is capable of when she tries to interview him. "Veronica Guerin" is by the numbers as it depicts the near saint-like title character going through her day-to-day grind for truth, justice and the Irish way. The screenplay by Carol Doyle and Mary Agnes Donohue (from Doyle's story) takes a typical show-the-tragic-ending then build the story to that end, a la "Silkwood." It is a sound way to tell a tale and Schumacher does a yeoman's job doing so. Cate Blancett is a bit too bright and bubbly in the role of a character who takes some pretty hard knocks getting her story - she is shot, at close range with a big gun, as a warning; and, she is brutally beaten when she confronts Gilligan at his manor, without witnesses. As the story progresses, I would expect an edge of cynicism and caution to enter Guerin's character but Blanchett plays it with an upbeat, optimistic air to the very end. The actress is fine in her character but it is not her best work. Supporting cast is capable and the members give solid perfs. Irish actor Ciaran Hinds is, for once, playing an Irishman and, even with his own accent, has the air of the charismatic celebrity as the Coach. Gerard McSorley is chilling as the ruthless Gilligan who will stop at nothing, literally, to protect what is "rightly" his. His sudden beating of Veronica is shocking in its unexpected abruptness. Techs are, as you would expect in a Jerry Bruckheimer production, are top rate. I don't see any Oscars looming on the horizon but "Veronica Guerin" is an interesting docu-drama, well told, and deserves a look just to see what one person can do to change the world.