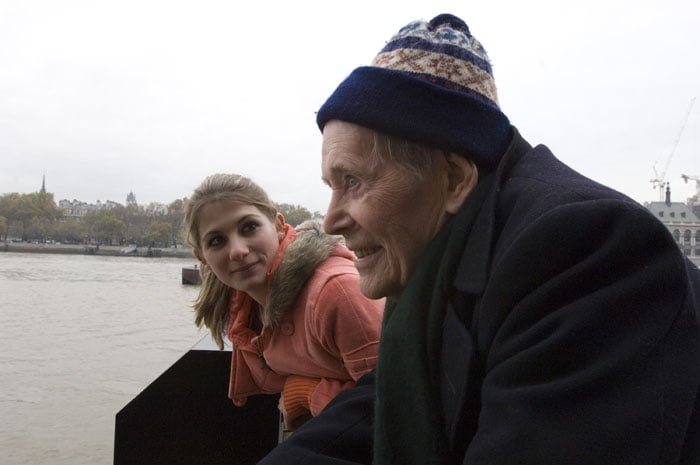 Screenwriter Hanif Kureishi ("My Beautiful Laundrette," "The Mother") used his own morning ritual as a jumping off point to observe his future, then threw in the titular character to spice things and what has resulted is a valentine for seventy-four year old actor Peter O'Toole. The character of an aging yet still elegant old rogue is one that O'Toole celebrates his gifts with and he's delightfully set off on either side by fresh talent Whittaker and experienced comedic actor Phillips. Director Roger Michell ("Notting Hill," "The Mother") finds the right comedic tone that lends the dirty old man-ish behavior a puckish charm without succumbing to the Brit twee impulse. Ian isn't at all pleased with Jessie's presence and rightly so ('It's been barely twenty-four hours and I'm screaming for euthanasia' he tells Maurice). She's one of those rude, sullen types who finishes off the liquor and hangs about eating junk food in front of the telly all day. When Maurice asks what type of work she's looking for, she replies 'model' with a mouth stuffed with chips (Whittaker gives Jessie the uneducated accent of "Absolutely Fabulous's" Bubble). Amused, Maurice promptly finds her work - as an artist's model - but she bans him from the class before she will disrobe. Jessie agrees to be accompanied about London by her aging admirer, especially after she learns he's somewhat famous and appears to have money. He shows her the sights and allows her suggestions, following her into nightclubs and buying her pretty presents. Jessie allows Maurice a certain level of indiscretion, just enough to keep him interested at first, but as she comes to know him, it becomes more about love...and respect. And by the time that early prostrate exam, where Maurice learns his eventual fate and his current handicapping, turns to surgery, Jessie is distraught that Maurice has not told her and becomes his caretaker (Whittaker deserves much praise for transforming her character from white trash to respectable young womanhood before our eyes). Kureishi's wonderful script lays out the matter of factness with which the aged view death (Maurice and Ian dance at a friend's funeral) and wraps it in the tender melancholy of youthful perspective and nostalgic memories. And yet, it is sharply funny, from Maurice's amused commentary on Jessie's behavior ('Oh, thank you!' he responds when she informs him she'll allow he purchase her another drink) to Ian's more disgusted observations ('her idea of cooking is to put a plate of virtual sick into the microwave'). Maurice's pawing is made dignified by his woo ('Shall I compare you to a summer's day,' wisely delivered without a hint of irony) and his wooing is always shadowed by the misery wrought with past womanizing - a gift of diamond earrings to his Venus bears the weight of prior knowledge that Maurice is still supporting his ex-wife, artist Valerie (Vanessa Redgrave, "The White Countess," touching fully formed in her few brief scenes), who asks for little and lives minimally. O'Toole's glides through his performance as the twinkling debaucher like a dancer sweeping across a ballroom floor, light on his feet, making it seem easy. But his character is complex and the actor gives him all kinds of notes. If "Venus" proves to be O'Toole's swan song, it will have been a well chosen one.