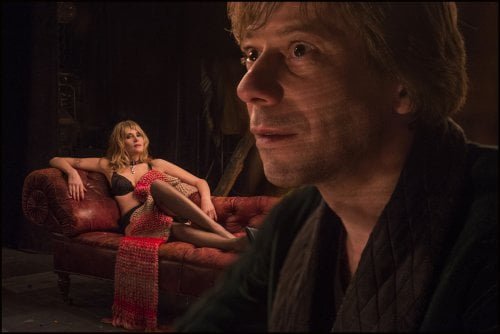 Playwright Thomas Novacek (Mathieu Amalric) is in the final throws of casting the main character for his play that is his directing debut. It is well into the night when he finishes with auditions and he is about to leave the theater when a disheveled woman, Vanda Jordan (Emmanuelle Seigner), enters, apologizing for being late for her try out as the lead in “Venus in Fur.”

Discouraged after a day of fruitless auditions, theater director Thomas (Mathieu Amalric, "Quantum of Solace") is in no mood to deal with Vanda (Almaric's "The Diving Bell and the Butterfly" costar Emmanuelle Seigner), an aggressive older actress who arrives late, drenched, begging for a chance to audition. He can't find her on his schedule, but her persistence in spite of her apparent lack of knowledge of his subject, pays off. When Vanda, attired in a more period appropriate costume than the modern S&M gear she came in wearing, speaks, Thomas has found his "Venus in Fur." Cowriter (with playwright David Ives)director Roman Polanski's ("Chinatown") last film was a disappointing adaptation of a stage play. His latest, however, is an extremely enjoyable lark, a very witty and well acted one. This two-handler based upon a play about the staging of Leopold von Sacher-Masoch’s 1870 novel, “Venus in Furs,” is a power struggle between the sexes framed within the world of the man whose name was used to coin 'masochism,' set beneath a proscenium arch. Featuring two riveting performances, it may be the funniest, sexiest comedy of the year so far. It is notable that Amalric here looks much like Polanski and is playing a director while Seigner is Polanski's wife. The film could be read as an homage to Seigner's contributions to Polanski's career just as it could be a tongue-in-cheek comment upon his own marriage. Vanda not only adjusts the lighting before she takes to the stage, she begins to make suggestions, goading Thomas into a burst of creative rethinking. For all her apparent lack of knowledge, Thomas soon becomes aware that Vanda knows the text by heart (is she even real?), but her attempts to equate modern issues into it frustrates him - can't art be enjoyed for art's own sake? The actors' thrusting and parrying is sublime, Seigner gradually taking total control. Polanski's deft camera movements keep us in the action as his counterpart begins to block scenes. Everything he needs is contained on this one set, which humorously includes a phallic looking column, left over, Thomas tells us, by a 'Belgian musical production of Stagecoach.' "Venus in Fur" is fleet, funny and ferocious, his best film since his Oscar winning "The Pianist."

Woody Allen is well known for having a character in many of his films the alter ego of himself. Roman Polanski? Not that much. But, in “Venus in Fur” he has the quintessential persona for himself with Mathieu Amalric as the playwright turned director. He is struggling to make a decision casting the lead in his play. That changes when the woman, Vanda, appears at the door. Speaking of Vanda, Emmanuelle Seigner (Polanski’s wife) is a powerhouse of the character. When she first enters the stage, she is a wreck, all harried and flustered and is not on Thomas’s call list. That changes as she slowly convinces him that she is the one to be his Venus. That sounds simple but the way Polanski (who wrote the screenplay with David Ives, adapting Ives’s play, which was adapted from the novel by Leopold von Sacher-Masoch) makes the film flow is the work of a master. All aspects of the production are terrific, from costume to set design and photography, are spot on. The theater stage could have felt claustrophobic but, because of the talent of his stars, particularly Seigner, who is able to change her character in a second, it never is. I could not take my eyes off her riveting Venus. Amalric is perfect as the director’s alter ego as a director, but Vanda is truly superb.