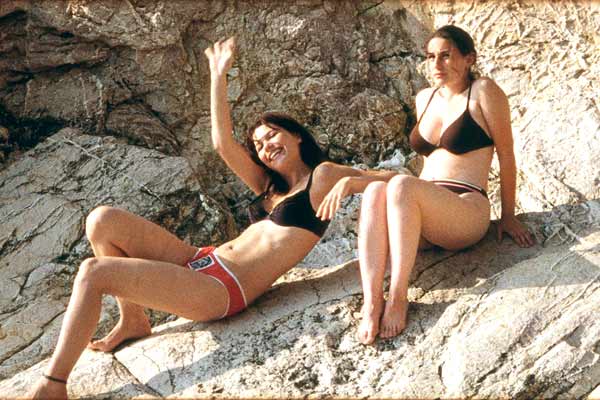 A frumpy young woman vacations in Marseilles in the large, empty villa of her uncle. She eats at a cafe next to a much hipper woman who she is startled to see sobbing openly. That same young woman appears at her door several hours later - oddly they have switched their exact same, pink beaded bags back at the restaurant. A connection is made, and an adventure begins for 'Vénus et Fleur.'

What appears to be another light little beachside romantic comedy turns into something a little bit more. Writer/director Emmanuel Mouret digs a little deeper, giving us two character studies that are defined not only by the actresses, but in the characters' names, art direction and, more typically, costume. Fleur (Isabelle Pirès), the demure flower, is given to covering her buxom bod in frumpy sundresses. She is practical, quiet and shy and obviously comes from some wealth. Vénus (Veroushka Knoge), the goddess of love, looks like a runway model given to tattoos, rock tees and tight jeans when she's not going topless poolside. The Russian had impetuously followed a French lover back to his home town only to discover he already had a new girl friend. Fleur, sensing her boring existence is about to end, convinces the destitute Vénus to stay and accept some money, rationalizing that as the money was given to her by her parents, who work for the state, that France would, in essence, be aiding Russia. The girls attempt to create their own adventures with no success. Vénus accepts a rich older man's invite to his estate, but Fleur is uncomfortable. The two girls toss about a ball on a beach full of guys who must all be gay (neither seems to realize this). Fleur's neighbor Dieu (producer Frédéric Niedermayer), who later could indeed be said to play God in the role of fate, hops their fence and makes a big play for Vénus, but she's not really interested in more than flirtation. Fleur gets a call from her brother to let them know this his backpacking friend Bonheur (Julien Imbert, a mite too bland to embody happiness) will be stopping by on his travels. Fleur reluctantly takes a back seat to Vénus' aggressive pursuit of the young man who is obviously better suited to her quieter disposition. Vénus counters their book reading with a picture book of Russia, then recites a poem from the perspective of Satan. Uncle Georges' house is made smaller by an explanation that all but one bedroom is locked to ward of burglars (?!), leaving only a bedroom, outdoor pool and a kitchen living area. The kitchen bar has two extremes - brightly lit or thrust into darkness - as Vénus and Fleur struggle with their opposing natures. The duo lie together on a bright red canopied chaise which looks like a pop art womb, Fleur now wearing Vénus' tank tee. Vénus tells Fleur that she does not know why Fleur would wish to be like her, as her personality is a burden. The actresses make the odd couple's friendship seem nothing but natural and everything falls together as it should, the butterfly attracting a mate for the flower.