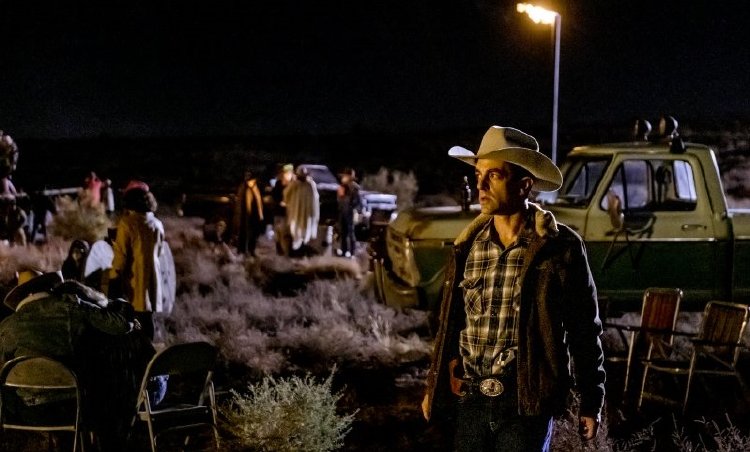 The very first thing we learn about New Yorker writer Ben Manalowtiz (B.J. Novak) is that he has no use for romantic relationships, something shared with his buddy John (John Mayer) who theorizes there is a different woman best suited for each of his various needs, so why commit to one.  So it’s really strange when Ben, in bed with a repeat hookup he barely remembers, gets a phone call in the middle of the night from a West Texan telling him his girlfriend, the man’s sister, has died.  Some strange impulse makes him cede to the man’s conclusion that of course he will attend her funeral. Ben will be surprised by how much he enjoys Abilene Shaw’s (Lio Tipton) family but opportunistic when her brother Ty (Boyd Holbrook) opines that she was murdered and they must pair up to seek “Vengeance.”

Writer/director/star B.J. Novak’s feature film debut is, at its core, a bid to reconsider the preconceptions which divide a red and blue America, but this filmmaker doesn’t stop there, instead adding subtext about our current media age, our desire to fit in vs. cultural appropriation and just what defines us.  Perhaps nothing is more surprising about “Vengeance” than Ashton Kutcher’s performance as Marfa-based record producer Quentin Sellers, a man who awes Ben with his profundity before revealing something else entirely.  It’s the type of casting another Quentin is known for.

After searching for something to say about Abby at her interment (‘She loved music,’ says Ben noting her guitar, moving her family with a twee sentiment), Ben’s gears begin to whir when Ty claims his sister, who died of an overdose at a party in an oilfield, ‘wouldn’t even take an Advil’ and was definitely murdered, perhaps by a Mexican drug cartel.  Grasping onto the premise that people (i.e. ‘other’ people) indulge in conspiracy theories because they cannot face the truth, Ben has Ty stop by the side of the road to pitch ‘This American Life-like’ podcast producer Eloise (Issa Rae) on the project.  She’s enthusiastic, dubbing it ‘Dead White Girl,’ a surefire hit.  When Ty returns from his trip to the airport with Ben still with him, Ben is warmly taken in by Abby’s mom Sharon (J. Smith-Cameron).

Around the dinner table New Yorker Ben appears exotic and a potential stepping stone for Abby’s younger sisters Paris (Isabella Amara), a Texas Goth girl who believes she’ll be a famous filmmaker and Kansas City (Dove Cameron), who just believes she’ll be famous.   Granny Carole (Louanne Stephens) quickly gains Ben’s approval when she opines about her granddaughter’s death that ‘you can’t solve something like this with a 45,’ then quickly advises needing ‘a 12 gauge, a couple of ARs, a Wesson automatic and a sidearm for safety.’  In other words, she’s the family cut up.  The little brother affectionately known as El Stupido (newcomer Eli Bickel), endears himself to Ben by requesting he sleep on the floor next to Ben’s bed which he used to do when Abby slept there because of a fear of ghosts.

Novak moves his mystery along with blackly comic beats, finding wisdom (Sellers’ coaching of an amateur teenaged singer) and acceptance (the stereotypically scary looking Mexican Sancholo’s (Zach Villa) tender hearted memories) where he expects none and extreme violence over matters inconsequential (college football) alongside nonchalance in law enforcement (Officers Mike and Dan).  In tracing Abby’s text messages, Ben will also find himself and what he finds is not to his liking.  Novak’s jokes don’t always land, but he’s got comedic timing and a way with directing a large cast (the tyro reportedly had a producer on set who guided his own performance).  He’s also concocted a neat twist that upends his newfound sentiments.

Novak and his cinematographer (Lyn Moncrief) paint Texas in big sky pastels until they get to his problematic last act.  Dressed in Ty’s clothes, a cowboy hat perched atop his head, Ben heads into the latest West Texas oil field party in the dead of night, ready to confront the person responsible for leaving Abby in the ‘Afterparty,’ the intersection of four local law jurisdictions.  The film ends abruptly after Ben’s final action, but what is Novak signaling?  A concession to stereotype?  No matter how you look at it, it just doesn’t add up as a defining moment in a spiritual evolution.