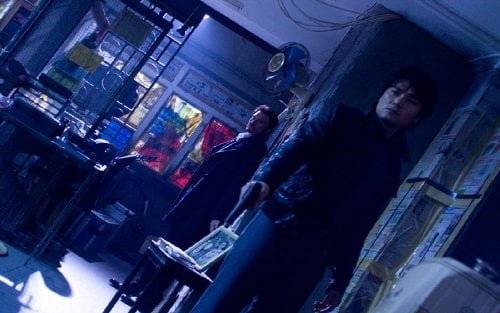 French chef Costello (Johnny Hallyday) learns that his daughter, Irene (Sylvie Testud), was critically wounded and her husband and children killed in a Hong Kong gangland hit. He drops everything and travels to the scene of the crime half a world away to get “Vengeance.”

When his daughter's family is slaughtered in Macau, former cop and current French restaurant owner François Costello (French rocker Johnny Hallyday, "Man on the Train") travels to Hong Kong. After getting as much information as he can from critically injured Irene (Sylvie Testud, "La Vie en Rose"), Costello hires three hit men - Kwai (Anthony Wong Chau-Sang, "The Mummy: Tomb of the Dragon Emperor"), Chu (Ka Tung Lam, "Exiled," "Election") and Fat Lok (Suet Lam, "Exiled," "Election") - to help him get "Vengeance." Director Johnnie To ("Election," "Exiled"), the 'Jerry Bruckheimer of Hong Kong,' working with frequent screenwriting collaborator Ka-Fai Wai ("Mad Detective"), delivers a terrific Asian noir featuring stunning cinematography, balletic gunplay with his signature misty clouds of blood spray and a better than average story that harkens back to the 2003 Dutch/Belgian "The Memory of a Killer" without forgoing To's tales of the Triad. Those not familiar with To might think of a more restrained John Woo (and hey, were those circling hawks at the end of one gunfight a tongue in cheek reference to Woo's doves?). If there's a problem with To's film, it lies with the performance of iconic French rocker Hallyday, whose rugged stoicism borders on blankness. He's got a great cinematic face though. The film's opening is a shocker. A typical family is viewed from an angled overhead shot as they move in and out of a room. The doorbell rings and the father peeks through the peephole. Bad idea. His terrified wife corrals their two children upstairs. After Costello elicits information from her from her hospital bed by having her point to letters, words and phrases in a newspaper, he visits the scene of the crime and To uses this visit as a springboard to flash back and fill in the blanks as to what happened after Irene went upstairs which is even more surprising than his opening. Costello's trio of gunmen take him to visit 'Uncle' out in a junkyard and learn about Python (Felix Wong, "Drunken Master II") who came to get his shotgun sawed off just like one of Irene's assailants. There's a lot of humor sprinkled throughout "Vengeance," like Costello's guys's request of their shack dwelling 'Uncle' for the keys to his place in Hong Kong. The foursome go on the hunt for Python and his cronies Wolf (Siu-Fai Cheung, "Exiled," "Election") and Crow (Ting Yip Ng, "Election") but the quest for vengeance gets turned on its head along the way. That's not before a number of intense set pieces that both dramatize the film's themes (a dustup at a picnic spot where the 'good guys' will not attack the 'bad guys' while their families are with them) and its genre goodies (a moonlit shootout where the only visual constant is the flare from firing guns). An almost medieval moment is achieved when the two sides face off using bales of shredded paper as shields as they approach each other across a field. The film is peppered with sight gags (bicycles and umbrellas) although a CGI sequence involving a colored frisbee ring is so poorly done it should have been excised. The film's most poignant and plot-altering idea is that Costello is harboring a bullet in his head from twenty years prior that will gradually steal his memory. As evidence of this begins to creep in, his hired men take him to Big Mama (Michelle Ye) and pay her to look after him. Big Mama cares for a large group of children - orphans? children of Triad members? That's left as ambiguous as what Costello's daughter or husband did to deserve their fates and the film is all the better for it. As Costello takes his place among them, To and Wai make us question what revenge is compared to protecting one's family. "Vengeance" is an IFC release which will begin playing on VOD 8/4/2010. It's more than well worth checking out.

Hong Kong action director Johnny To gives us a signature, though formula, gangsta film that takes an international twist, at the start, by gunning down Irene and her family. We do not know why the hit takes place but do know when daddy learns about his little girl that Costello will be there to protect his daughter and exact revenge for the death of his two grandchildren and their dad. In addition, we learn that Costello suffers from a mentally debilitating condition that is causing his memory to increasingly fail him. Ka-Fai Wai’s script is high on action but a little confused at times in the whirl of frequent, sometimes murky and darkly shot, gunfights, making me wonder, while I watched, who is killing whom. The cast is a collection of To regulars but Johnny Hallyday, with his craggy, solemn face and sad, worldly eyes, dominates the film. Simon Yam is sinister and deadly as the big boss, George Fung, who ordered the hit on Costello’s family. The trio of hit men he hires to exact his pound of flesh from Fung, played by Anthony Wong Chau-Sang, Ka Tung Lam and Suet Lam, provide both the firepower and the comic relief that takes some of the unrelenting edge off of “Vengeance.” I love a good Hong Kong actioner and “Vengeance” fits that bill. To derives from maestro John Woo and there is much influence by the older filmmaker in the spirit of the film. This is not necessarily a bad thing but more originality would have helped.