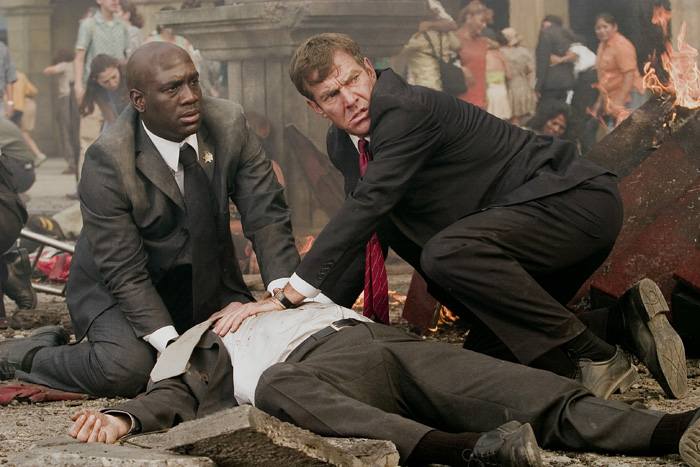 In Salamanca, Spain, the United States President is set to deliver his new counter terrorist strategy in a town square surrounded by protesters. CNN director Rex Brooks (Sigourney Weaver, "Be Kind Rewind") has several viewpoints recording the action. Secret Service agent Thomas Barnes (Dennis Quaid, "In Good Company," "American Dreamz") is tucked in close. Spanish cop Enrique (Eduardo Noriega, "Open Your Eyes," "The Devil's Backbone") is watching the mayor but distracted by potentially cheating girlfriend Veronica (Ayelet Zurer, "Munich"). American tourist Howard Lewis (Forest Whitaker, "The Last King of Scotland," "The Great Debaters") stands in the square with his camcorder, alert to both the main event and Barnes's worried gaze. So, when the president is shot, who has the best "Vantage Point?"

A high caliber international cast, an Irish television director (Pete Travis) and a green screenwriter (Barry Levy) with a marketable ad concept all add up to one big slice of cheese with "Vantage Point," a movie that cannot even stay the course with its own story telling device. After the not too badly done initial setup 'rewinds' to tell the tale again, the film starts sliding off the rails. By the film's final acts, the preposterous dialogue, overly earnest acting and silly set pieces (a little girl loses her ice cream as a prelude to absurd endangerment) are eliciting chortles rather than the thrills the filmmakers were purportedly after. After witnessing the climatic event via CNN's cameras, we meet Barnes, identified by a surprised Brooks as the man returning after taking a bullet for the president only six months earlier (this pol is a real sitting duck, apparently). Barnes is nervous, even more so when he spies a fluttering curtain from an annex window. After the shooting, he takes down Enrique, suspicious of the man who dashed too quickly for the podium, but Enrique gets away after the ensuing explosion that engulfs the square. His version starts with a cheating lover whom he later spots dressed as an EMT in the ambulance which took away the president. Lewis interacts with a little girl, Ana (Alicia Jaziz Zapien), who dumps her ice cream on him and who he then proceeds to save from multiple disasters. The president himself (William Hurt, "Mr. Brooks") has a paradigm shifting viewpoint, but after his story unfolds its tough to figure out who the other three 'strangers' are, as the filmmakers throw the whole lot at us to explain and end the story. Possibilities include agent Kent Taylor (Matthew Fox, "We Are Marshall," TV's "Lost"), soon revealed as a turncoat, Spanish special ops guy Javier (Edgar Ramirez, "The Bourne Ultimatum") being blackmailed for the return of his brother and Suarez (Saïd Taghmaoui, "The Kite Runner"), the evil genius behind the day's events. Sigourney Weaver is amusing as the news director exasperated by the performance of her cameramen (one of whom is obviously not what he appears) and the unscripted commentary of reporter Angie Jones (Zoe Saldana, "Drumline," "The Terminal") and she makes us feel the shock of witnessing an earth shattering event, but with the exception of her "Eyewitness" and "The Village" costar Hurt, no one else is credible. Fellow Oscar nominee (and winner) Whitaker plays his good natured, ambling American too broadly to be taken seriously. Dennis Quaid's agent seems in urgent need of an enema. Ramirez is felled by an ambiguously written part just as Taghmaoui is immediately identifiable as the villain the minute he greets Whitaker's tourist in the square. Veteran character actor Bruce McGill ("Cinderella Man," "The Lookout") is a bit too forceful with his advice to the president, perhaps in an attempt to cast him as a red herring and "Lost's" Fox is given no motivation. "Vantage Point" is not the sleight of hand thriller it's being advertised as, but it works as a goofy potboiler, a popcorn movie liberally dusted with cheese flavoring. Just don't take it seriously for a second.