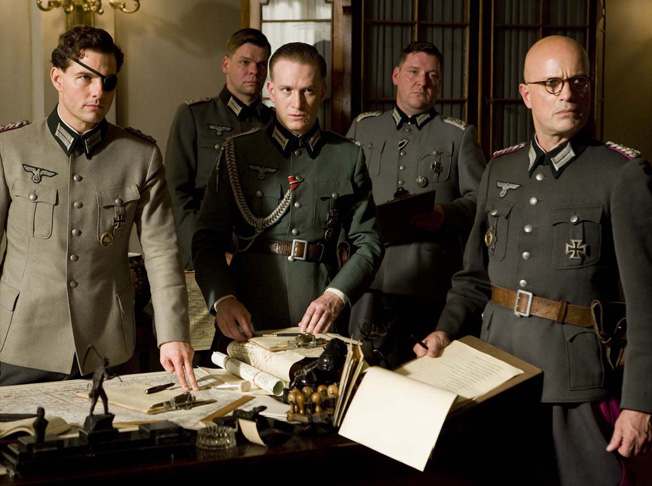 In March of 1943, Major-General Henning von Tresckow (Kenneth Branagh, "Henry V," HBO's "Warm Springs") attempted to assassinate Adolph Hitler by smuggling a bomb disguised as Cointreau aboard Hitler's plane. At the same time in Tunisia, Colonel Claus von Stauffenberg (Tom Cruise), convinced that the Nazi regime was evil, tried to convince officers to turn against their government, but in April he was horrifically wounded, losing an eye and a hand. Back in Berlin, Stauffenberg actively joined the resistance as he was promoted to Chief of the General Staff of the Reserve Army, a position that would see him ideally placed to overthrow Hitler's government by amending Hitler's own emergency plan - Operation "Valkyrie."

Tom Cruise's troubled MGM/UA has yanked the release date for "Valkyrie" all over the place, finally settling on a Christmas Day release but failing to screen the film in time for many groups's award consideration. In so doing, expectations have sunk. But director Bryan Singer ("The Usual Suspects," "Superman Returns") has delivered a pretty good film with a cast that includes a who's who of British acting aristocracy playing out a little known, to U.S. audiences anyway, chapter of WWII history. In the lead, Cruise can only be accused of slight underplaying, delivering his lines very quietly, while convincing in a physically difficult role as the maimed Colonel. The main problem facing screenwriters Christopher McQuarrie ("The Usual Suspects") and Nathan Alexander was how to shrink the focus of a conspiracy that involved hundreds of people and it is apparent in the finished product. There are still so many players that it is a challenge to keep track of some of them and distinguish their back stories. Still, Singer and his writers mostly manage to overcome an even more difficult challenge - how to maintain suspense in a story whose basic outcome is known. All the little pieces which need to click together fall into place, except for those few that don't and the ramifications of the failure ratio have a well-paced build. But like Cruise's performance, an overall restraint keeps the heroic story behind "Valkyrie" from soaring as high as it should. Singer's opening certainly doesn't lack any flash. Stauffenberg is writing in his Tunisian tent as Cruise narrates, beginning in German, segueing into English (the Brit actors maintain their British accents, the German actors theirs, an odd hodgepodge). In a land of heat and yellow sand, an air attack is so devastating it seems Stauffenberg has been cut down before he can serve his country in the way that he wishes. But he survives and is newly appointed to a position under General Friedrich Olbricht (Bill Nighy, "Still Crazy," "Pirates of the Caribbean: At World's End"), a man who shares his viewpoints and who introduces him to the Resistance led by General Ludwig Beck (Terence Stamp, "The Limey," "Yes Man"), a man who resigned his post in open protest against Hitler's rise to power. Attempts to feel out General Friedrich Fromm (Tom Wilkinson, "Michael Clayton," "RocknRolla") result in a reminder of their oath to the Fuehrer, although it is clear Fromm will say nothing if not implicated. Stauffenberg is eventually reassigned to report directly to Fromm in a position that brings him into contact with Hitler's (David Bamber, "Miss Potter," HBO's "Rome") inner circle. He interviews an adjunct, Lieutenant Werner von Haeften (Jamie Parker, "The History Boys"), whom he asks point blank about joining the resistance, and goes out on another treacherous limb attaining an insider in the Wolf's Lair, General Erich Fellgiebel (Eddie Izzard, "Shadow of the Vampire," "Across the Universe"). Stauffenberg has been described as a military genius and it was he who had the idea to use Operation Valkyrie, named after Hitler's beloved Wagner opera, to overthrow the Nazi government. At Hitler's Berghof (beautifully recreated by the production design team), the Fuehrer describes the Colonel as one of his best and signs the amended plan on faith. There is a false start, the Reserve Army called out but the assassination nixed by Beck, who insists that Himmler must also be present before any bomb is detonated. When Stauffenberg next visits the Wolf's Lair, explosives set in his briefcase, he discovers the meeting has been moved because of the heat from the bunker, where the blast would have powerful impact, to an exterior conference room. The briefcase is set, the Colonel and his loyal adjunct make their way to Berlin and Fellgiebel cuts communications from the Lair, but their is confusion as to Hitler's demise and Olbricht refuses to activate the waiting Army until it is verified. When Stauffenberg returns to the Bendlerblock (the actual location was used, after much protest from the Germans who regard Cruise's religion as a cult), he insists that Hitler is dead and the group begin to take charge of the Government, but eventually conflicting orders from both camps must be weighed and acted upon in the communications control office. Stauffenberg is now considered a national hero (he was executed, along with many of his coconspirators, as soon as the Nazis regained control of the Bendlerblock) and Cruise, wearing wavy hair and either an eye patch or the false glass eye that signals Hitler's presence, is believable as an aristocratic military officer still in love with his wife (Carice van Houten, "Black Book"), and mother of his four children. But as if trying to demand attention by whispering, Cruise maintains so much cool, he never achieves the simmer level. He is convincing as a man getting used to the loss of a hand and an eye, but the performance just isn't dynamic enough to get one's blood churning. There are so many supporting players here that most only play one note - Nighy anxious, Wilkinson duplicitous and self-serving, Stamp commanding (and also low key). More interest is raised from young Jamie Parker as the loyal and efficient adjunct and Eddie Izzard as the inside man who may or may not be depended upon. On the side of the Fuehrer, Tom Hollander ("Pirates of the Caribbean: At World's End") has fun making Branaugh squirm and Christian Berkel ("Black Book," "Miracle at St. Anna") exudes a sense of privilege and annoyance as the man caught in the middle between real and rebellious orders. With "Valkyrie," Singer continues his theme of underdogs defeating the odds, but in choosing history over super heroes and thieves, and a hero who ultimately failed, his film has been drained of some of his previous work's excitement. "Valkyrie" will keep those unfamiliar with the details of its story hooked on how it all goes down, but once Stauffenberg's plot collapses Singer's plot lacks the ticking time of its central bomb.