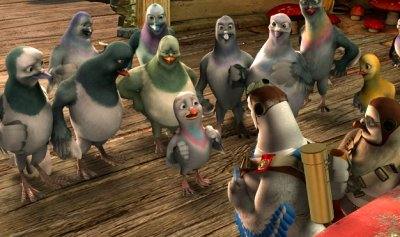 It’s not the size of the wingspan, it’s the size of the spirit.” These are words that a diminutive wood pigeon lives by as England fights for her life against the Nazis during World War Two and the little bird dreams of becoming a member of the elite Royal Homing Pigeon Service and help win the war in “Valiant.”

'It's not the size of your wingspan, it's the size of your spirit' Valiant It's May, 1944 and the brave birds of the Royal Homing Pigeon Service (RHPS) are taking a beating at the claws of General Von Talon (Tim Curry, "Kinsey") and his falcons. But one puny patriot, inspired by the most decorated pigeon of WWII, Commander Gutsy (Hugh Laurie, "Stuart Little"), will be undeterred in his goal of flying his own missions with the RHPS. His name is "Valiant." Screenwriter George Webster (along with Jordan Katz and George Melrod) had a nice idea for a story, to honor the carrier pigeons of WW's I and II. Of the fifty-three recipients of the animal equivalent of the Victoria Cross, the Dickin Medal, that were awarded during WWII, thirty-one were pigeons. Yet while "Valiant" does indeed publicize this little known fact, the animated tale of misfit recruits accomplishing a heroic mission lacks an integral component - humor. Director Gary Chapman does ensure that his debut film gets the period details right - black and white propaganda film recruiting for the RHPS, musical selections like "The White Cliffs of Dover" and "Non Je Ne Regrette Rien" - and the computer generated animation itself, while not up to Pixar standards (even though Vanguard Animation's letter jostle onto the screen in imitation of the CGI giant's), is perfectly solid - but the tale being told is nothing new, nor is it made unique in any way save its anthropomorphized birds and rodents. Valiant (Ewan McGregor, "The Island," all plucky cluck) is in awe of the flyers at Felix's (John Hurt, "The Skeleton Key") pub (an upside down rowboat) and decides to respond to one of Gutsy's recruitment fliers. Refusing the offer of mom's regurgitated breakfast (the film's one true laugh), the small wood pigeon sets off for London, crash landing in Trafalgar Square at a most opportune time for Bugsy (Ricky Gervais, BBC's "The Office"), a shell game con man with a serious personal hygiene problem (he's named the three flies always buzzing about his head). The two sign up for the RHPS, using Gutsy's pull to impress the gatekeeper and are sent to training grounds along with aristocratic Lofty (Pip Torrens, "All the Queen's Men") and the brawny but not brainy twins Toughwood (Brian Lonsdale) and Tailfeather (Dan Roberts). Before Sergeant Monty (Jim Broadbent, "Bridget Jones: The Edge of Reason") has whipped his pathetic Squad F into shape, Gutsy arrives and announces that due to depleted forces, they'll have to face action. Will Bugsy go AWOL? Will Valiant save the day? There's little doubt how it will all turn out. Animation of all the birds gives each, even members of the same species, distinct personalities, pigeons presented in some unusual colors. Those that are common gray include the detail of the oil slick rainbow that rings their necks, but the colors are too delineated to have magical effect. Better are the falcons, with Von Talon's head crested with a bristling blonde crewcut. French resistance mouse Charles De Girl is given feminine curves in all the rodent places. Her sidekick Rollo must be a cousin of "Cinderella's" Gus. Pelican Felix is given a peg leg of a pencil stub, but on the whole the designers haven't put much effort into crafting human tools out of bird-sized objects. The writing shows little wit, relying on Avian puns ('got our goose,' 'keep a stiff upper beak') that just don't fly. The best of them? 'We have ways of making you Squawk,' Von Talon threatening POW Mercury (John Cleese, "Shrek 2"), before injecting him with truth serum that outs not only the captured British bird but falcon Underlingk (Michael Schlingmann), with their love of pink, a stab at homophobic humor that is perhaps meant to tickle the adults but merely seems out of place. Valiant meets his love interest, Nurse Victoria (Olivia Williams, "Rushmore"), just like Ben Affleck met Kate Beckinsale in "Pearl Harbor" - at the end of a needle - but there is no suspense in whether the two will get together. "Valiant" has its heart in the right place, but its funny bone is missing. Children at the screening I attended seemed attentive throughout, however, so it could be that "Valiant" registers as a 'little adult' film, more serious fare for the preteen set.

Valiant (voice of Ewan McGregor) is inspired by a recruitment newsreel depicting the glamour and danger of the RHSP. These heroes who fly secret messages from behind enemy lines are shown living the good life and as the recipients of the amorous attentions of nursing doves. When Valiant’s hero, Flight Commander Gutsy (voice of Hugh Laurie), arrives in his rural town on a recruiting campaign, his mind is made up to join the fray and fight the Nazis. The RHPS has been decimated by the enemy’s deadly falcon brigade, led by its notorious leader, General Von Talon (voice of Tim Curry), and Commander Gutsy has no choice but to recruit Valiant and the other new members of Squadron F for a secret mission even though they haven’t completed their training. They set off in an RAF bomber but, before they can all parachute from the plane to safety, it is riddled by enemy fire. No one is sure if Gutsy made it out of the burning plane before it crashes. Valiant and his squadron mates – ne’er-do-well con artist Bugsy (voice of Ricky Gervais), brainy Lofty (Pip Torrens), and not-too-bright battling brothers Toughwood and Tailfeather (Brian Lonsdale and Dan Roberts) – must contact the French Resistance and bring an important secret message back to headquarters against tremendous and dangerous odds. If this sounds like a World War Two propaganda film cranked out by the Ealing Studio during the war, that’s because the film was made with the cooperation of that venerable English company. In spite of the fact that the story is about talking pigeons, Valiant” is an old-fashioned war film where our heroes must face daunting odds and do their best to save Old Blighty from the fascist oppressors. It has a plucky little star with Valiant ready to put his life on the line to save his nation and his friends. In what I believe is homage to “The Sands of Iwo Jima” it also has the two brothers who are always brawling with each other until they must face the enemy, then they fight as one. You also get the evil one-eyed bad guy in General Von Talon with Tim Curry putting a nasty persona on the nefarious falcon leader. Animation techs are solid but not of the same caliber as that in the Disney/Pixar collaborations over the years. “Valiant” is a good-looking film but lacks the style and flair of “A Bug’s Life” or the “Toy Story” animations. It is also a bit obvious that Vanguard Animation Productions blatantly copied the well-known Pixar logo with its precocious little lamp. One complaint I have with “Valiant” is the lack of humor – there is some but not enough for a kids animation – although I have to say that the children in the audience when I saw the film appeared to be attentive throughout. Maybe there is a market for old-style war films that anthropomorphize its critter characters and tells a straightforward story about right and wrong with good good guys and bad bad guys. Or, maybe, the runtime of 76 minutes isn’t long enough for the little kids to get antsy.