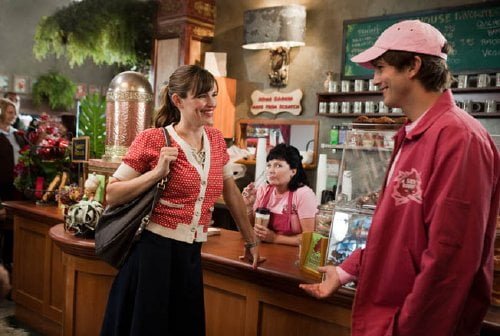 At a local L.A. TV outlet, 2nd sportscaster Kelvin Moore (Jamie Foxx, "Ray," "Law Abiding Citizen") is appalled by the puff piece he's assigned by his producer Susan (Kathy Bates, "Misery," "The Blind Side"), but when he interviews Siena Bouquet florist Reed Bennett (Ashton Kutcher, "Dude, Where's My Car?," "What Happens in Vegas") at the L.A. Flower Market, he gets all the facts and figures and the roving duo begin to radiate "Crash-like" story strands for "Valentine's Day."

Director Garry Marshall ("Pretty Woman," "Georgia Rule") has brought a gargantuan cast together who only stand to benefit by the six degrees of separation they will now be able to claim with four Oscar winners, another couple of nominees and the cast and guest stars of "Grey's Anatomy." As written by "The Prince & Me's" Katherine Fugate, this ode to L.A.'s lovers and wannabes is a great big bouquet of cliches and while Marshall gets some likable performances out of his over experienced cast, he fails to inject heart into this bloodless valentine. Reception at a promotional screening was more polite than enthusiastic. Only a couple of the stories work. In one of the more obvious outings, Kutcher and Jennifer Garner ("Juno," "The Invention of Lying") are best friends, he newly engaged to Morley (Jessica Alba, "Sin City," "The Love Guru"), she dating dreamy doctor Harrison Copeland (Patrick Dempsey, "Made of Honor," TV's "Grey's Anatomy") and while it is obvious who each is destined for, the duo - and yes, I'm talking about Kutcher here as well - are the film's best, giving the most natural performances. As the lesser connective character, Foxx doesn't fare as well, ending up partnered with the woman who throws an annual 'I Hate Valentine's Day' party, the obvious wallflower Jessica Biel ("The Illusionist," "Easy Virtue"), in a forced bit that features Biel having to do the old treadmill speed-up, maniacally gobble chocolates and generally act like an idiot. Maybe that's why her client, Sean Jackson (Eric Dane, "Marley & Me," TV's "Grey's Anatomy"), hasn't been signed back with his pro football team. Good thing his manager is Paula Thomas (Queen Latifah, "Chicago," "What Happens in Vegas"), a tough professional who knows how to have fun with the errant calls to her fill-in secretary Liz (Anne Hathaway, "The Princess Diaries," "Rachel Getting Married") who moonlights as a 'adult phone entertainer,' a job that goes over like a lead balloon with her new buttoned up boyfriend Jason (Topher Grace, "In Good Company," "Spider Man 3"). When he stomps away, he runs into Edgar (Marshall perennial Hector Elizondo, "Pretty Woman," "Georgia Rule") at the Hollywood Cemetery outdoor Valentine's movie. Edgar has also been disillusioned by his wife and love of his life Estelle (Shirley MacLaine, "Some Came Running," "Terms of Endearment") and they are the grandparents of Edison (Bryce Robinson, "Marley & Me"), one of Garner's students whose quest to get flowers delivered to his Valentine keeps him one step ahead of babysitter Grace (Emma Roberts, "Lymelife," "Hotel for Dogs"), who, at eighteen, is trying to lose her virginity to boyfriend Alex (Carter Jenkins, "Keeping Up with the Steins"), who works at the Indian restaurant Biel throws her party in. They both go to school with Willy (Taylor Lautner, "Twilight," "New Moon") and Felicia (country star Taylor Swift, annoying as all get out) in an obnoxious story that seems designed more to exploit their alleged real life romance than to relate to the others. In the heavenly skies above, airplane seatmates Holden (Bradley Cooper, "The Hangover") and returning soldier Captain Kate Hazeltine (Julia Roberts, "Pretty Woman," "Erin Brockovich") strike up a friendship, but only one of earthbound connections proves the slightest surprise (and no, as weird as it may seem Roberts is not related to real life niece Emma). The film also features George Lopez ("Tortilla Heaven," "The Spy Next Door") as a driver and friend of Reed's and, in cameos, Larry Miller, Kristen Schaal, and various members of the Marshall clan (including Garry but not Penny). Fugate has tried to imbue her script with love lessons, like how love purportedly demands that we accept repulsive behavior along with the good or how friendship means we should honestly tell a buddy that his/her lover is all wrong for them, but everything is artificial, a device used to either split people apart or bring them together. Symbolism in Fugate's hands has a wife commenting on her cheating spouse's literal juggling ability and subtlety in Marshall's playing Foreigner's "Feels Like the First Time" as Grace drives to meet Alex. Logic in "Valentine's Day" dictates that a man who flies coach has his own car and driver waiting at the airport or that crashing airport security gets one a concerned slap on the wrist. The one thought I was left with at film's end is why that each of the three different breed of dogs and the one teddy bear featured are black and white, but I won't be losing any sleep over its deeper meaning. "Valentine's Day" is just one more arrow through the heart of the romantic comedy genre.