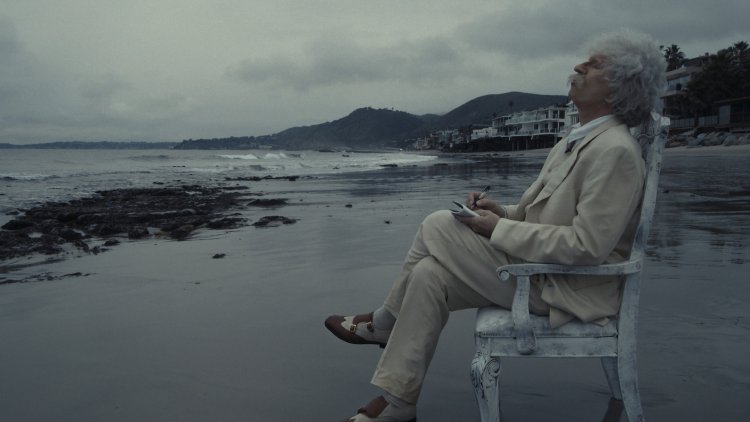 Last year an incredible film was made about Frank Zappa, aided in large part by the extraordinary archives he had kept throughout his career.  Now directors Ting Poo and Leo Scott, editors making their directorial debut (and two of the three editors credited here), have used a similar wealth of thousands of hours of archival material kept by an actor fascinated by the conflicting roles of truth and illusion in his profession.  Although their subject’s voice has been compromised by a tracheostomy from throat cancer treatment, he is still with us and his name is “Val.”

Although the first thing we hear is ‘My name is Val Kilmer,’ the young man speaking into the microphone is actually his son, Jack, who does an exemplary job providing narration throughout.  But that doesn’t mean we don’t hear from Val himself, even though he needs to put a finger over the hole in his throat to speak, his voice radically altered.  Over the years, Kilmer developed a reputation for being difficult, his roles in big films like “Top Gun” and “The Doors” giving way to smaller, less heralded films, but the passionate artist we get to know here is far more serious about his craft than we may have guessed of the young star of “Top Secret.”  He’s also spiritual and extremely devoted to family.

Kilmer was one of three brothers and the youngest, Wesley, was the creative in the family, recreating beloved movies like “Jaws” in the family’s backyard well before Sweding was a thing.  He would suffer an epileptic seizure and drown in the family pool at the age of fifteen, yet Val always keeps him close, his artwork appearing in movies like “Real Genius.”  Kilmer went on to follow in footsteps never left, becoming Juilliard’s youngest admission at the time, writing a play on terrorism he was invited to mount and starring in ‘Scab Boys’ on Broadway upon his graduation.  His backstage footage treats us to the impossibly young Sean Penn and Kevin Bacon mooning his camera.  It was also early in his career, shooting his first movie, “Top Secret,” in London, where he became infatuated with Joanne Whalley, the English actress he would marry after they’d been cast together in “Willow” (‘She was brilliant and I was in town making fluff’).

The filmmakers take a cue from one of Val’s passions featured immediately in their film as an overhead shot, the actor’s hands assembling a collage in one of the scrapbooks he’s always assembling.  Their dreamlike, memory infused editing reflects the past in the present, in one extraordinary sequence bringing Kilmer’s mom alive again as her son enters her now empty house.  Kilmer’s desire to work with first class directors can be seen in audition tapes, often unsolicited, the actor trying out for Kubrick’s “Full Metal Jacket” and putting his own spin on Henry Hill for Scorsese (his desire to work with Brando landed him in “The Island of Dr. Moreau,’ his on set footage fascinating, the experience personally frustrating).  He was absolutely determined to play Jim Morrison, immersing himself to the point that he acknowledges that although Whalley tried to be supportive, she was probably driven half mad.  Better times are shown with the couple enjoying Jack and daughter Mercedes, Kilmer even recording the changing of poopy diapers.

Today we see father and son goofing off together, dressing up as Batman and Robin (a role he has a strange history with), while daughter Mercedes lives right next door.  We see Kilmer doing the type of fan events that usually signify a career is well past its prime, the actor mingling with fans at a desert “Tombstone” screening and signing autographs at ComicCon.  But while he acknowledges many consider this type of thing ‘the lowest,’ he is grateful to the people who still cherish his work.  He spent the better part of ten years working on what he’d hoped would become an ‘American classic,’ workshopping his portrayal of Mark Twain at theaters across the country until his cancer diagnosis brought an end to his mounting of a film.

Early on, Kilmer says actors ‘aspire to a performance so true, audiences can see themselves in it.’  With “Val,” Poo and Scott will have many reconsidering Kilmer, a man who has been true to himself.

Val Kilmer, if you check his filmography, was a prolific actor for four decades. During those forty years and more, he also filmed and videoed nearly every aspect of both his personal and professional lives. Now, after battling throat cancer, he tells his story, literally through his own eyes, in “Val.”

I had mixed feelings about actor Val Kilmer’s self-portrait, thinking it, possibly, just an indulgence for the actor. I could not have been more wrong.

Editors-turned-fledgling-documakers Ting Poo and Leo Scott take what must be hundreds if not thousands of hours of Kilmer’s personal footage and assemble it into a fascinating study of the man. We learn that Kilmer embraced the new technology of video a long time ago, resulting in a plethora of unseen footage. The directing-editing team constructs an in-depth look the actor’s life that is a compelling documentary biopic.

This is actually an epic telling of Val Kilmer’s life, from his early creative movie-making with his brothers Wesley and Mark to his first movie roles, “Top Secret! (1984),” “Real Genius (1985)” and his star-making turn as Iceman in “Top Gun (1986).” We get Kilmer’s own behind the scenes footage of Tom Cruise and the cast of “TG” cutting up for the camera and of that film’s production. This is just a small part of the anecdotal footage tracing the actor’s long career and its ups and downs.

Kilmer tells of his battle with throat cancer and how it badly affected his voice, not a good thing for an actor. To give himself voice on the film, Kilmer enlisted his son, Jack, to be his voice for his narration. We get to see glimpses of his long career, including “Willow (1988),” his turn as the late Jim Morrison in Oliver Stone’s “The Doors (1991),” “Tombstone (1993),” the disaster of “The Island of Dr. Moreau (1996),” “Spartan (2004)” and many more – some good and some not so.

Kilmer does not try to whitewash the ups and downs of his life which, as “Val” amply displays, there were many. The actor and subject leave with the coda that his story is about “truth and illusion.”