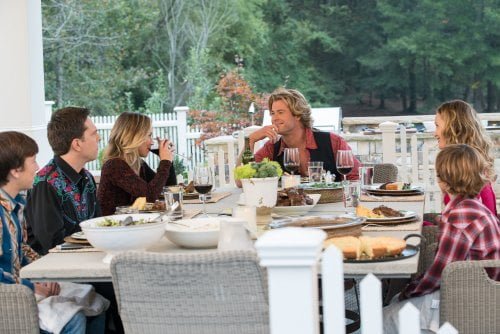 In need of some family time and feeling nostalgic, Rusty Griswold (Ed Helms) decides to try and do what his dad (Chevy Chase) tried many years ago - take his wife (Christina Applegate) and kids to Walley World for "Vacation."

Here is the very definition of a 'mixed bag.' After interminable exposure to this film's trailer, anticipation was low, so the comedy surprises by hitting its target as much as it does in scenes which haven't yet worn thin. Still, for every truly funny moment, there are more which either don't work or which are so telegraphed they lose much of their impact. Even so, age old physical schtick gets a boost from the comedic timing of its cast and Clark's Wagon Queen Family Truckster has more than met its match in an Albanian Tartan Prancer. It's about on a par with 2013's pseudo-"Vacation" family road trip comedy "We're the Millers" and references the original National Lampoon version with tongue in cheek hitting similar beats without seeming like an outright retread. To the familiar strains of 'Holiday Road,' the film's opening credits feature a series of real life family vacation photos that may be funnier than anything that follows. We meet Clark's grown up son on the job as an EconoAir pilot with misplaced trust in his senior copilot (Colin Hanks cameos as a passenger whose family gets manhandled during turbulence). On the ground, Rusty gets dissed by a more upscale airlines' pilot (Ron Livingston, who'll pop up again in the film's climax). A shared family dinner with the Petersons (Keegan-Michael Key and Regina Hall) puts Rusty into competitive family man mode while Debbie Griswold lusts after their recent trip to Paris. Instead, Rusty comes up with a road trip - what better way to put an end to his oddball older son James's (Skyler Gisondo, "Night at the Museum: Secret of the Tomb") torment at the hands of younger son Kevin (Steele Stebbins, "A Haunted House 2"), right? That Prancer is one of the funniest elements of "Vacation," from its alien power plug to its unintelligible key fob buttons and a GPS system that gets stuck in 'angry Korean man' mode. Clark lives on in Rusty's over eagerness to expound upon inappropriate subjects to his children and inexplicable attention from a foxy female Ferrari driver. The latter gag is handed down to James, who spies Adena (Catherine Missal) in the next lane just in time for Kevin to humiliate him (she'll keep popping up, the next time to be creeped out by Rusty's attempt to be his son's wingman). None of the stops along the way offer too many laughs, the 'Griswold Springs' stop unwelcome even in the film's trailer, a Four Corners Monument bit wasting the talents of Nick Kroll, Tim Heidecker, Kaitlin Olson and Michael Peña. The family stopover, this time to Rusty's sister Audrey's (Leslie Mann), features Chris Hemsworth cavorting in revealing underwear and lots of cow puns. The only truly inspired bit of touring comes from Charlie Day as a white water rafting guide with lame banter and suicidal tendencies. "Vacation" gets more laughs from bits like Rusty's obsession with Seal's 'Kiss from a Rose,' Debbie's legendary status at her college alma mater, Kevin's abuse of his brother and the Korean GPS guy. Norman Reedus gives master spittake as a scary trucker who's not what he appears to be...maybe. The return of Clark (Chevy Chase) and Ellen (Beverly D'Angelo) flatlines. "Horrible Bosses" screenwriters Jonathan M. Goldstein & John Francis Daley make their feature directorial debut here and show a talent for timing if not always taste. Taking a page from Helms's "Hangover" movies, they go out with more holiday photos, this time of their fictitious family. Grade: